A perfect start for the Grand Slam contenders 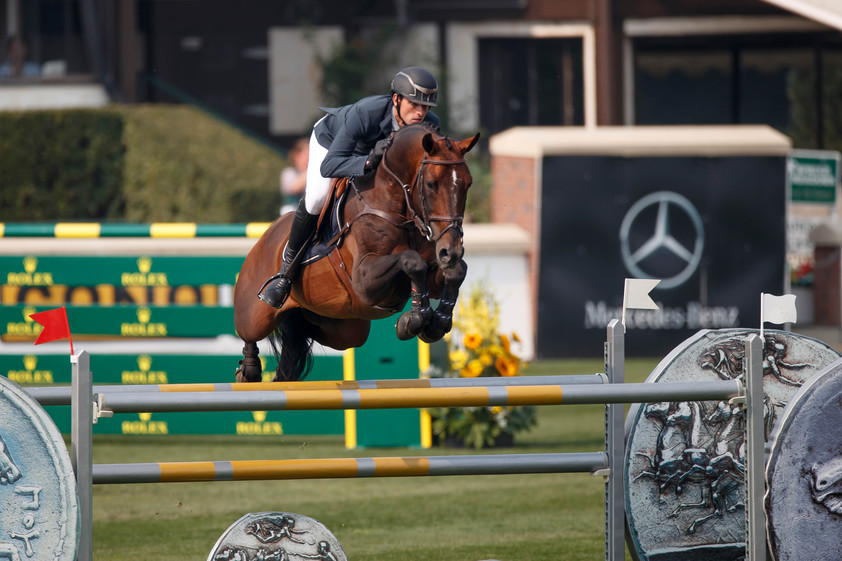 Over the coming days the best riders in the world will be competing at the Spruce Meadows ‘Masters’ 2017, the second leg of the Rolex Grand Slam of Show Jumping, in Calgary, Canada and on Thursday the current Grand Slam contenders Grégory Wathelet and Pedro Veniss were already able to secure themselves a starting place in the Grand Prix on Sunday.

Grégory Wathelet, winner of the last Grand Slam leg in Aachen in July, finished third in the “Cana Cup” on Thursday afternoon and thus claimed one of the 50 tickets available for the “CP ‘International’, presented by Rolex”, which is endowed with prize-money totalling three million Canadian dollars. “My horse ‘Eldorado’ is in fantastic form and now that we have succeeded in qualifying for the Grand Prix, my top priority over the next few days is to keep him fresh and motivated to ensure that we enter the ring on Sunday under optimal conditions,” was how the Belgian rider described his plans up until Sunday, when he will strive to claim his second Major victory in succession. If Grégory Wathelet manages to triumph in the “CP ‘International’, presented by Rolex”, it would mean he will be competing for the Grand Slam title at the CHI Geneva in December.

Pedro Veniss, the winner of the “Rolex Grand Prix” at the CHI Geneva 2016, has the chance to win a 250,000 Euro bonus in the Grand Prix of the Spruce Meadows ‘Masters’ 2017 on Sunday for two Major victories within one Grand Slam cycle. The Brazilian show-jumper was also able to prove that he is one of the favourites to win the “CP ‘International’, presented by Rolex”: He namely came fourth in the “Cana Cup”, which means he has also secured himself a starting place in the Grand Prix on Sunday. “I am very satisfied with today’s result,” said Pedro Veniss after the “Cana Cup”. “My horses are in good shape and I hope I will be able to put in a good performance in the Grand Prix on Sunday.”

Four qualifications for the Grand Prix have already taken place, there are still three to come: On Friday the riders have the opportunity to jump their way onto the starting list for the “CP ‘International’, presented by Rolex” in two different classes – in the “Friends of the Meadows Cup” and in the “Atco Six Bar”. The last tickets will be awarded in the “BMO Nations’ Cup” on Saturday. Then, we will know all 50 pairs, who will be battling it out on Sunday to seize the Major victory in the Rolex Grand Slam of Show Jumping.