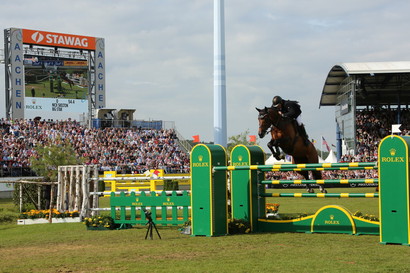 Big Star, who Nick Skelton rode to victory in the Rolex Grand Prix at the CHIO Aachen 2013, will celebrate his sporting comeback at the Royal Windsor Horse Show after a prolonged period of injury. Big Star had to take a break from competing after sustaining an injury in August. Nick Skelton and Big Star did compete at the Winter Equestrian Festival in Wellington, Florida, but only in the small classes. In Windsor, they will be facing tough competition from their own country: Scott Brash and Ben Maher, both from Great Britain, are currently under the top three in the show-jumping world ranking list.