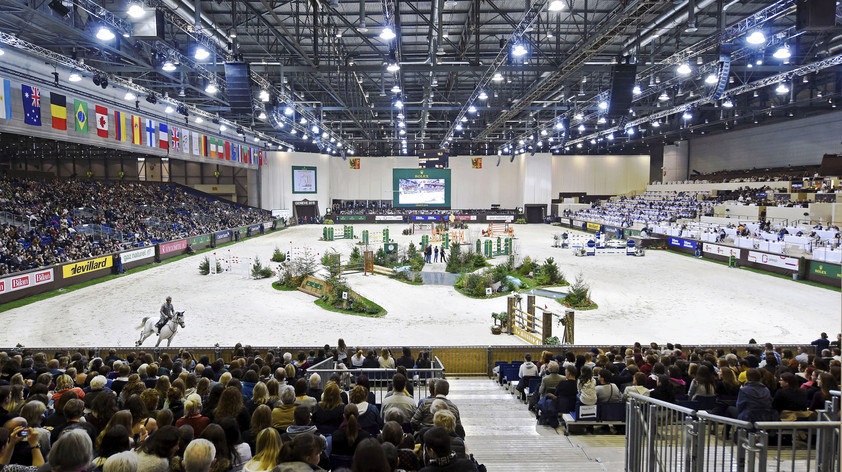 The Palexpo in Geneva

On the horizon of the King of the Alps. Majestic, with the dignity of an undisputed ruler, the Mont Blanc towers over Lake Geneva. On the banks of which the battle for the crown has just commenced again. Because at the Palexpo in Geneva, the largest indoor arena in the world, the top stars of the equestrian world traditionally meet up in December for the third Major of the year in the Rolex Grand Slam of Show Jumping.

The CHI Geneva has been impressing the crowds since 1926 and attracts tens of thousands of visitors every year to the most southwestern point of francophone Switzerland to experience unforgettable sporting moments together with the best riders in the world.

All eyes will especially be cast on one man: Scott Brash, whose name is as closely connected with the glorious history of the Rolex Grand Slam as the Majors themselves. Since precisely two years ago, the young Brit laid the foundation for that monument that turned him into a living legend, after his victory in the “Rolex Grand Prix” at the CHI Geneva 2014: In the following year, he also succeeded in winning the Majors in both Aachen and Calgary and hence became the first and only rider ever to win the Rolex Grand Slam of Show Jumping.

Scott Brash’s journey with Rolex is, however, by no means over after this pioneering triumph: “My fascination for the Majors is unabated,” the 31-year-old said and promptly delivered the evidence in July when he came second at the CHIO Aachen 2016. Moreover, after defending his Major title at the CSIO Spruce Meadows ‘Masters’ in September, he will be saddling his horse at the CHI Geneva as the current contender for the Rolex Grand Slam.

Philipp Weishaupt will also be travelling to Switzerland with the confidence of a Major winner, since it was he, who delegated Scott Brash into second place at the CHIO Aachen 2016. The German show-jumper has the opportunity to win the bonus for two Major victories within a Grand Slam cycle in Geneva. “Winning the Grand Prix in Geneva is an absolute dream,” commented the also 31-year-old. “It is an extremely tough challenge, but my horses are in top form and I think we have a good chance.”

But, the Swiss arena is not going to be the venue for a duel between merely Brash and Weishaupt, the entire show-jumping world elite is competing at the CHI Geneva, including last year’s winner, Steve Guerdat. The Swiss local hero has won the Major in Geneva three times already, in 2006, 2013 and 2015 and is one of the absolute favourites again this year.

Yet, which national hymn will echo through the Palexpo on the afternoon of December 11th, 2016, which rider will head the lap of honour, whose triumph will be eternally anchored in the minds of the 8,500 spectators, will exclusively be decided in the ring.

The top 40 pairs in the world qualify to compete in the “Rolex Grand Prix” of the CHI Geneva. In the end, one pair will triumph over all of their fellow competitors. Let the battle for the throne of the equestrian sport begin!