CHI Geneva: A show with a long tradition 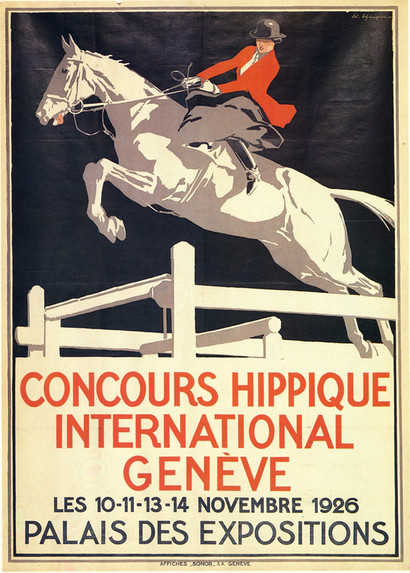 The CHI Geneva starts today. In the concluding Rolex Grand Prix on Sunday, the decision will fall as to whether Christian Ahlmann succeeds in becoming the first rider in history to win a bonus in the Rolex Grand Slam of Show Jumping. However, prior to this we will be taking a look back at the beginnings of the show and its long tradition.

They were courageous and had a great idea. 90 years ago, a delegation from the Geneva-based "L'Etrier" club visited an equestrian show in France – they returned home with the idea of organising an indoor show in Geneva too. On November 10th, 1926, two years later, on a Wednesday, the bold intention had become reality. The first show was organised at the "Palais des Expositions" parallel to the international automobile exhibition – the CHI Geneva was born. One could hardly suspect at the time that it was going to develop into one of the biggest success stories in the history of the international equestrian sport. The economic situation was poor; it was difficult to impress the people with a big international event. And yet the enthusiasm of the first organisers helped overcome the difficulties and turn the first event into one of the most traditional and most prestigious shows worldwide. 85 riders with 158 horses competed, Sandro Bettoni won the first Grand Prix with Scoiattolo. Between five and eight thousand visitors watched the individual competitions, the people stayed until late in the evening, the show was accepted. In the meantime, 40,000 people make their way into the arena on the days of the show – a fantastic success and a thoroughly solid basis for the famous and traditional history that followed that premiere event. The CHI has shown constant development, after an intermezzo in the Vernets Sports Centre, the event relocated to the huge Palexpo Arena at the beginning of the 1990s – which has remained the venue of the world's most famous indoor show ever since.