CHI Geneva gets off to a top start 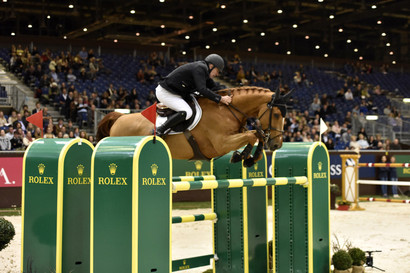 The CHI Geneva 2015 has only just begun. However, already on the first day of the show it became clear that the world elite of the show-jumping circuit are in top form for the third and final Major Show of the year in the Rolex Grand Slam of Show Jumping.
The victory in the “Credit Suisse Grand Prix” on Thursday evening went to the French rider, Roger Yves Bost, the European Champion in 2013. He was thus able to qualify directly for the “Rolex Grand Prix” on Sunday afternoon. But he won’t be the only one in the Final, the best 24 riders from this first qualifier, were also able to secure themselves a place in the competition on Sunday. They include the Canadian Olympic gold medallist, Eric Lamaze; the top German riders, Daniel Deußer, Christian Ahlmann and Ludger Beerbaum as well as the top French stars Patrice Delaveau, Simon Delestre, Penelope Leprevost and Kevin Staut. Having won Olympic gold in 2012, the local hero, Steve Guerdat, is also pre-qualified for the “Rolex Grand Prix”, so he was able to take things easy and rode a young horse in the “Credit Suisse Grand Prix”. The same applies for Scott Brash, the first and up until now only winner of the Rolex Grand Slam of Show Jumping: As last year’s winner, he too also has a place reserved in the “Rolex Grand Prix”, so he rode the youngster, “Hello Forever” on Thursday evening instead of his top horse “Hello Sanctos”. The British rider has plenty of opportunity to warm up “Sanctos” for the Grand Prix, for example on Friday evening: That is namely when the “Rolex IJRC Top 10 Final” is being staged and the top riders in the world rankings will battle it out to take the victory.