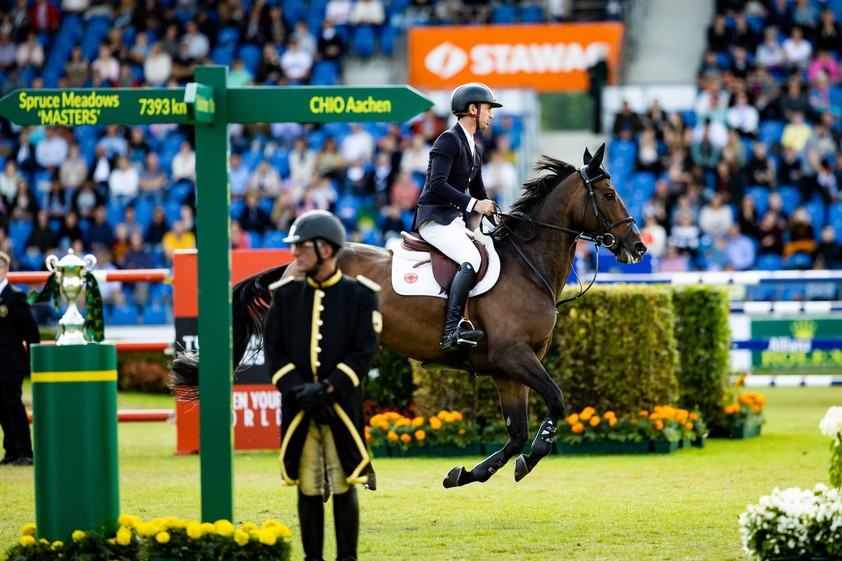 The Rolex Grand Slam of Show Jumping returns to CHIO Aachen from 24 June – 03 July 2022, with the Rolex Grand Prix on the final Sunday providing a fitting end to two weeks of exceptional sport. Returning to it usual slot between The Dutch Masters and Spruce Meadows ‘Masters’, the event often compared The Championships, Wimbledon will welcome 40,000 passionate equestrian spectators back the pristine Aachen Soers showground.

Daniel Deusser returns to the hallowed grounds as both the live contender of the Rolex Grand Slam of Show Jumping, following his victory at The Dutch Masters in March, and the defending champion of the Rolex Grand Prix at CHIO Aachen. The German, currently ranked World No.9 brings the talented mare Killer Queen VDM with him to defend their title and continue his conquest to become only the second person to win the Rolex Grand Slam of Show Jumping. Deusser will be joined by six of his fellow Rolex Testimonees, as well as numerous talented German riders including Christian Ahlmann, André Thieme and Marcus Ehning.

World No.1 and winner of the 2021 Rolex Grand Prix at CHI Geneva Martin Fuchs will be looking to claim the non-consecutive bonus for winning two Rolex Grands Prix in a year. The Swiss has had an incredible first half the year securing the FEI World Cup Finals title in April and more recently winning the 5* Swiss Grand Prix. He has strength and depth in his string of horses and will be looking to carry his winning momentum into the main stadium of the Aachen Soers showground. Compatriot and fellow Rolex Testimonee Steve Guerdat will also be looking to build on his vast winning experience to claim his first victory in this respected class.

Tokyo 2020 Individual Olympic Games gold medallist Ben Maher will be looking to add a victory in the Rolex Grand Prix to his impressive collection of results. The Englishman finished in fourth-place last year on his impressive chestnut gelding, Explosion W. Long-term teammate Scott Brash, the only rider to have won the Rolex Grand Slam of Show Jumping, knows what it takes to take to win in the beautiful grass arena and will be hoping to restart his quest for a second Grand Slam. Joining the strong British contingent is the Under-25 World No.1, and World No.17 Harry Charles. Charles has had a meteoric rise through the senior rankings over the past year. The young British rider will be returning the iconic venue following his debut in 2018 and will be looking to cement his name amongst the best riders in the world.

2022 Rolex Grand Prix winners Ashlee Bond (World Equestrian Festival) and Gregory Wathelet (CHI Royal Windsor Horse Show), all know what it takes to win a Rolex Grand Prix and will be relying on this experience to help them claim one of the most prestigious prizes in show jumping.

Show jumping legend Rodrigo Pessoa returns to Aachen exactly 50-years after his father, Nelson Pessoa, claimed his second CHIO Aachen Grand Prix win. Marlon Modolo Zanotelli will also be vying to ensure the Brazilian flag is represented on the podium. Off the back of recent victories in in Paris and the Nations Cup at CSIO Roma Piazza di Siena, Frenchman Kevin Staut, will be full of confidence of his talented horses heading into CHIO Aachen.

Joining the list of world-class horse and rider combinations is World No.3 Peder Fredricson, who is always a fierce competitor and heading up the Irish contingent is World No. 5 Conor Swail who brings two of his top horses; Count on Me and Nadal Hero & DB.