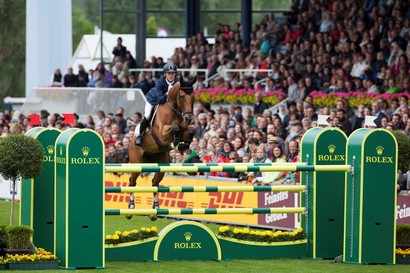 The Spruce Meadows ‘Masters’ begins on Wednesday and the best riders in the world will be taking part in the second leg in the year of the Rolex Grand Slam of Show Jumping! Heading the list is the number one in the world rankings, Scott Brash, who after his Major victories in Geneva and Aachen could now become the first rider ever to win the Grand Slam. The 29-year-old British show-jumper has brought his best horse “Hello Sanctos” to Calgary with him in his strive to finish first in the Grand Prix, the “‘CP International’, presented by Rolex”.
However, there is tough competition also from his own country: The equestrian sport legend, Michael Whitaker, will also be giving it his best shot, together with his nephews William and Robert, who have both also competed at championship level. For Canada, among others, last year’s winner and national hero, Ian Millar, as well as Eric Lamaze, the 2008 Olympic Games individual gold medallist, have confirmed their participation. Switzerland is also very strongly represented: Romain Duguet, who claimed team bronze at the European Championships 2015 will be on board together with his fellow countryman, Steve Guerdat, the Olympic gold medallist, Major winner of Geneva in 2013 and current number five in the world rankings. The USA is also sending its top riders across the border: Beezie Madden (number three in the world rankings) is riding in Calgary, as well as McLain Ward (ninth in the rankings) Kent Farrington (fifth in the rankings) and Reed Kessler, who came second in the Grand Prix at the ‘Masters’ in 2014.
Always hot candidates to take the victory are the Brazilian Olympic gold medallist, Rodrigo Pessoa, and the Belgian show-jumper, Gregory Wathelet (number ten in the world rankings), who secured himself a silver medal at the European Championships 2015 in Aachen in the individual classification. As the winner of the Major in 2013, his fellow countryman, Pieter Devos, feels just as much at home on the spacious jumping arena of Spruce Meadows as the French rider, Kevin Staut. The individual European Champion of 2009 and team Vice World Champion of 2010 and 2014 has not only been one of the top show-jumpers in the world for years, he too almost succeeded in riding to victory in the Grand Prix at the ‘Masters’. Finally, his fellow countryman, Roger-Yves Bost, the European individual gold medallist of 2013 and team World Champion of 1990, will also be travelling to Canada.
A line-up that includes the current top riders in the world, Olympic champions, medal winners and Major winners, plus the unique opportunity for Scott Brash to win the Rolex Grand Slam of Show Jumping and thus write equestrian sport history – that is the Spruce Meadows ‘Masters’ from September 9th-13th, 2015!