“I can’t imagine there could be anything better!” – Interview with Rolex Grand Slam winner, Scott Brash 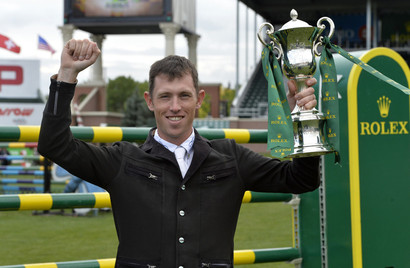 With his Major victory at the legendary Spruce Meadows ‘Masters’, Scott Brash became the first rider ever to win the Rolex Grand Slam of Show Jumping. We spoke to the 29-year-old British show-jumper about his sensational victory, which has turned him into an equestrian sport legend.

Your Major victory in Spruce Meadows means you are following in the footsteps of the Canadian national hero, Ian Millar. Last year he said, the first rider to win the Rolex Grand Slam will be the hero of all heroes. You have pulled off this exceptional feat! How do you feel now?
For me winning the Grand Slam is a dream come true. It is incredible winning one Major, but to win all three in a row – the three most difficult Grand Prix in the world – and what’s more with the same horse – is simply fantastic, simply a dream come true, I don’t know how else to describe it.

How difficult was it to assert yourself here in Spruce Meadows against the best riders in the world?
Extremely difficult! The course was very demanding, both rounds were a challenge, the allowed time was tight. The organisers put together a very special Major to commemorate the 40th anniversary of Spruce Meadows. It was phenomenal to win against such a line-up of top riders, over such a course and in front of such a fantastic crowd.

So, the conditions were spot on for a real Major?
Definitely! I love the atmosphere in Spruce Meadows, the “International Ring” is unique. The show has a very special history and one senses it in the ring too. The atmosphere was so intense, while I was riding. The crowd was terrific! It was simply a wonderful show.

Your journey with Rolex began with the Major victory at the CHI in Geneva in December, in Aachen you won the second leg and here in Spruce Meadows you have now claimed the victory in the Grand Slam. How was your journey with Rolex?
It was simply fantastic from the first Major victory until now. It is an honour for me to be the first rider to win this fabulous Rolex series. Rolex has been sponsoring the equestrian sport for many years, but what it has achieved with the Grand Slam is unique – both for us riders and for the sport as a whole. The Grand Slam has helped the show jumping sport to become more popular and it offers us riders an exceptional competition. As athletes, we couldn’t wish for more.

You have been heading the world rankings for months, you won team gold at the Olympic Games in 2012 and have been able to celebrate numerous further victories on the show jumping circuit. What significance does the Grand Slam victory have for your career?
Every rider dreams of winning in Aachen, Geneva and Spruce Meadows once. So, on winning the Grand Slam title, I have not only achieved a goal in my career, but also fulfilled a dream of a lifetime. To be honest, I feel like I have just reached the peak of my career. I can’t image there could be anything better!