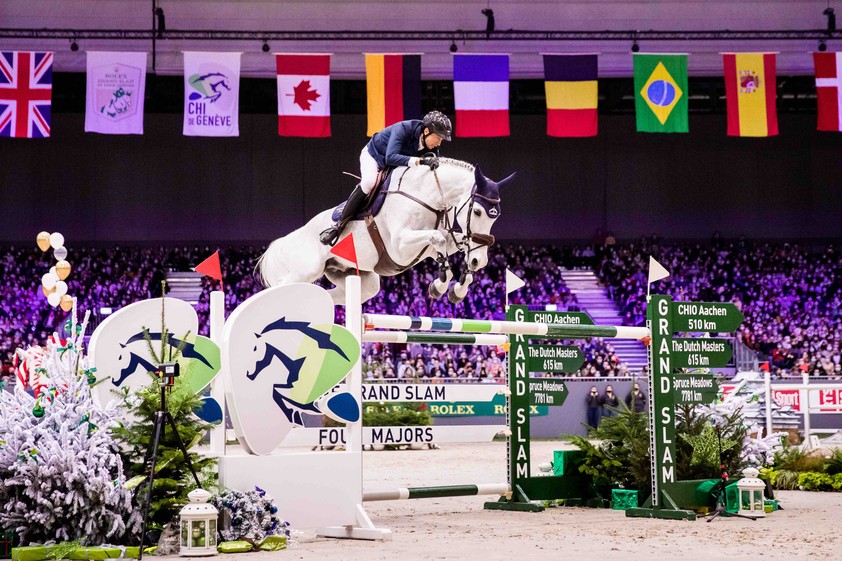 The world watched on in anticipation, as the final Rolex Grand Slam of Show Jumping Major of 2021 – the Rolex Grand Prix – played out at CHI Geneva in Switzerland, with 16 out of the world’s current top 20-ranked riders each staking their claim for a distinguished place in equestrian history. The culmination of four days of the highest level of show jumping, the Rolex Grand Prix would be decided over one round and a jump-off, should more than one rider go clear.

Representing 15 nations, the international field of 40 horse and rider combinations included the esteemed winners of the year’s previous three Majors: Max Kühner from Austria (winner of the Rolex Grand Prix at The Dutch Masters); Swiss Steve Guerdat (winner of the CP ‘International’, presented by Rolex at the CSIO Spruce Meadows ‘Masters’); and Daniel Deusser from Germany (winner of the Rolex Grand Prix at CHIO Aachen). As live contender, Deusser would settle for nothing less than victory in order to keep his Rolex Grand Slam journey alive, while Kühner and Guerdat would be looking to trigger the ‘two out of four’ bonus, which they were both in contention for.

After a little over an hour, none of the first 23 partnerships to tackle the 14-obstacle, 18-effort test were able to go clear, with the majority struggling to master the course’s tricky combinations, particularly the oxer at 13a. However, that was soon to change when Ireland’s Darragh Kenny produced a faultless round, much to the delight of the well-informed crowd. Kenny’s clear was immediately emulated by local rider, Swiss hero Martin Fuchs, who cleared the final vertical to rapturous applause. Co-designed by Swiss Gérard Lachat and Louis Konickx from The Netherlands, the course then claimed the scalps of a trio of top-level riders, including Rolex Grand Slam Live Contender, Daniel Deusser, reigning Olympic Individual champion, Ben Maher and three-time winner of CHI Geneva’s Rolex Grand Prix, Steve Guerdat. The opening day’s winner of the Trophée de Genève, American Kent Farrington, was once again on top form, immaculately negotiating the course with his 15-year-old mare, Gazelle, and booking his place in the jump-off. After another handful of combinations were unable to go clear, it was Major winner at this year’s Dutch Masters, Max Kühner, and his brilliant 10-year-old gelding, Elektric Blue P, who made no mistake, ensuring they were still in the running for the non-consecutive ‘two out of four’ bonus. Representation in the jump-off from the United States was soon doubled when Laura Kraut and Baloutinue crossed the finish line without a fault. Shortly afterwards, Harrie Smolders became the final rider to go clear, and in doing so setting up a scintillating six-horse jump-off.

First to go in the jump-off, Ireland’s Darragh Kenny became the first rider to record a double clear. Next up, Martin Fuchs and his nine-year-old, Leone Jei made it two out of two, comfortably beating Kenny into second place by nearly two seconds in a time of 41.54 seconds. Kent Farrington looked as though he would make it three out of three; however, after a typically blistering round, he was denied the honour after putting down the final Rolex oxer. Despite going double clear, Max Kühner was unable to knock Martin Fuchs off top spot after the Austrian finished 0.68 seconds off the pace. With Laura Kraut putting two fences down, Fuchs’ destiny would lie in the hands of last to go, 41-year-old Harrie Smolders; however, the Dutchman fell agonisingly short, eventually finishing in second place, just 0.23 seconds off the time of 2021 Rolex Grand Prix champion and the new Rolex Grand Slam of Show Jumping Live Contender, Martin Fuchs.

On his special and hugely talented nine-year-old gelding, Leone Jei, Fuchs, commented: “Leone Jei is very unique in the qualities that he has. The way that he jumps – he does it so lightly and effortlessly, which is impressive to see in a nine-year-old horse. He is very good in his head, he is so motivated, and he always wants to do his best, so I really appreciate having a horse like that in my stable and being able to look forward to the future together.” 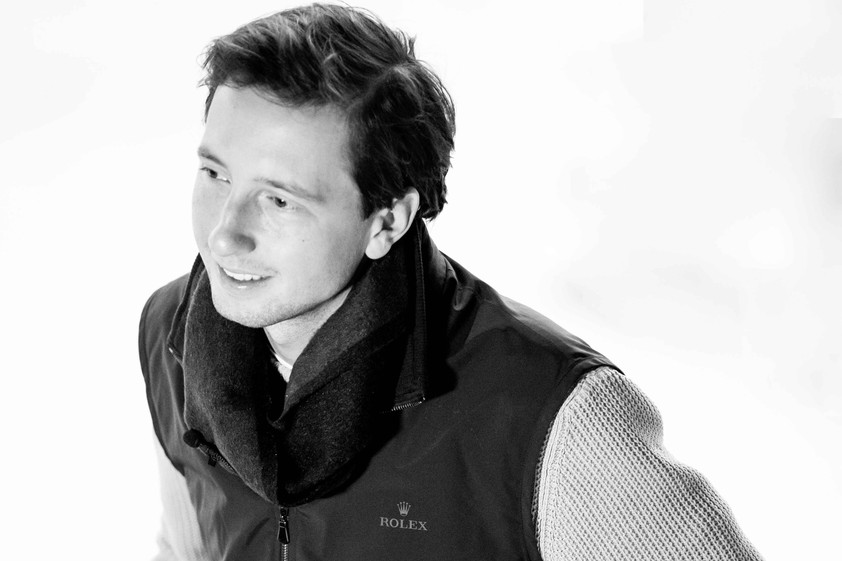 Aside from it being your home show, why is CHI Geneva so special to you?

CHI Geneva is not just special for me, all the riders feel really welcome here, but obviously as a Swiss rider, the support of the home crowd and the fans is huge.

For you, what makes a great team?

In show jumping and horse riding in general, you really need a huge team around you, that can help you with everything. So much work, time and passion goes into caring for the horses. I am very lucky with my family, as they are so supportive. I have a lot of good people around me and a good team, who all take great care of the horses at home to ensure they feel their best. This allows me to be able to solely focus on the sport and when I am at the shows – it means I do not worry about anything at home.

What is your plan for this winter?

This winter I will do some of the World Cup shows. We have some really nice World Cup shows coming up and they are very exciting and traditional shows that I like to go to. My goal is to build-up some of my younger horses and prepare them for the bigger classes so that I can develop some new horses for Grand Prix level.

Is there a young horse that you have that you think could be a future Rolex Grand Prix horse?

It is always difficult to say, but I do have a few rally nice five-, six- and seven-year olds. I have big hopes for all of them and I hope one or two will turn out to be Grand Prix horses and compete here at the CHI Geneva in the future.

Just like tennis and golf, show jumping now has its very own Grand Slam. Which other sporting Majors do you love to watch?

I enjoy watching tennis. As a Swiss, Rolex Testimonee Roger Federer is a big sporting idol, so I have followed tennis a lot. All four of the tennis Grand Slams are very exciting and for me Wimbledon is the top one that I love to watch.

What does the Rolex Grand Slam of Show Jumping mean to you?

If you were stranded on a desert island what three items would you take?

A book, water and my mobile phone. 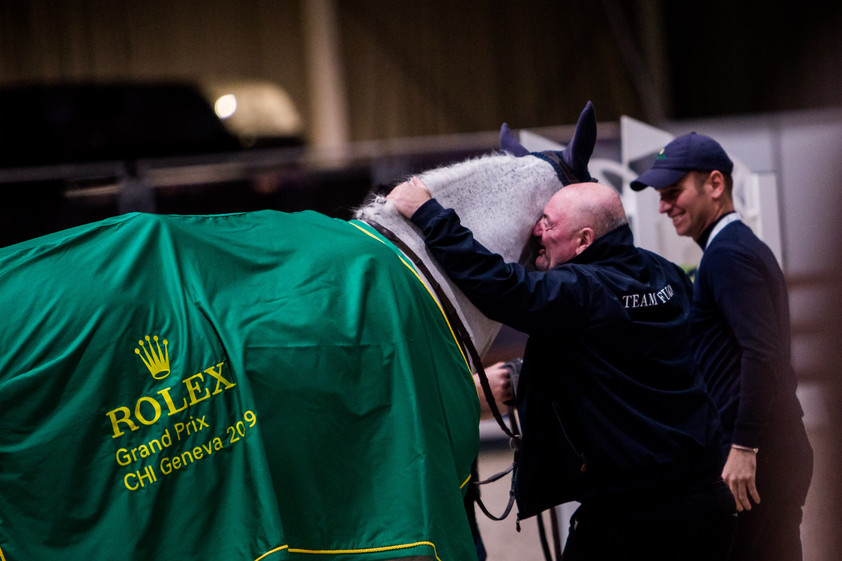 In the owner lounge with:

Where does your passion for horses and show jumping come from?

It’s a long story… I’ve always liked horses since I was a child, and we had a training centre close to our apartment. I always asked my parents if we could go there but we couldn’t afford it. Then I totally forgot about horses. I started working on my own and when I was 20-years-old, I went on holiday in Ticino for a week, and it poured with rain non-stop and I didn’t know what to do. There was an equestrian centre and it revived some memories and I went for a one-week course. I wanted to learn all about it but the coach said that one week wasn’t enough to learn everything, so from there I started training hard. Unfortunately, I was too old to become a complete rider, but I wanted to compete so in the end I did took part in some regional competitions.

Then I got to know Thomas Fuchs because he was my banker. As a car dealer, I had to do a lot of coming and going to my bank, and by talking we became friends. We lost ourselves a little because I went to Fribourg to train with Beat Grandjean at his stable. I stayed there for 15 years before coming back to Zurich and it’s at that time that I bought a horse from Thomas Fuchs. I continued riding a bit, but I was working and riding at the same time. Thomas is like this, if you buy a horse from him, you train with him!

So that’s when you met Martin Fuchs?

Exactly! One day I was in training with Thomas, and he asked me to do five strides between two obstacles, but I couldn’t do it, so he said that even a child was able to do it. I didn’t believe him, so he brings a kid to show me. Obviously that kid succeeded, so I said, “he might be lucky”, so he tried again and he did it brilliantly. Then he told me “I can do it 10 times if you want”, and that kid was Martin Fuchs. It’s at that exact moment that I said to myself that I need to buy horse not for myself, but for him.

A few days later, Martin was leaving for the Youth Olympic Games in Greece with one of my horses. When he came back, he said to me, “It was fantastic, but you have to buy a horse that is more efficient if we want to be competitive”. From there, we started to do a lot of competitions together. The competitions followed one another, and the purchases of horses followed one another. I bought one more, then another, and so on. This is the start of my collaboration with Martin.

How does the process work with you and the Fuchs family?

The way I see it is that they decide on all things relating to the horse. Sometimes Martin will come to me saying, “There is this show, do you think we should go?”, but he needs to make the decision himself, as I trust him with the horses more than anyone. I really like this process because I can rely on the Fuchs family because they are the best in their domain.

What’s your proudest moment as an owner?

There is not a particular moment. I am lucky enough to have won a medal in almost all championships and Majors, so for that reason it is impossible to choose. I like to say that the last win is always the best win, because it pushes you to get another one. I am always proud to see Martin win, from a regional championship to the top level of our sport. If you force me to choose one, of course I will tend to say the victory in 2019 in the Rolex Grand Prix at CHI Geneva, because of the way it happened: the last line, being in front of the best riders in the world, and the fact that it was a home win.

What does the Rolex Grand Slam of Show Jumping mean to you?

To me, the Rolex Grand Slam of Show Jumping represents the ultimate challenge for a horse, and it cannot get any better than this. It makes me think of Formula One, which brings a very particular type of excitement. The Rolex Grand Slam demands preparation and focus, and that you need to be detail-oriented – all of this transcends the values of Rolex as a company.