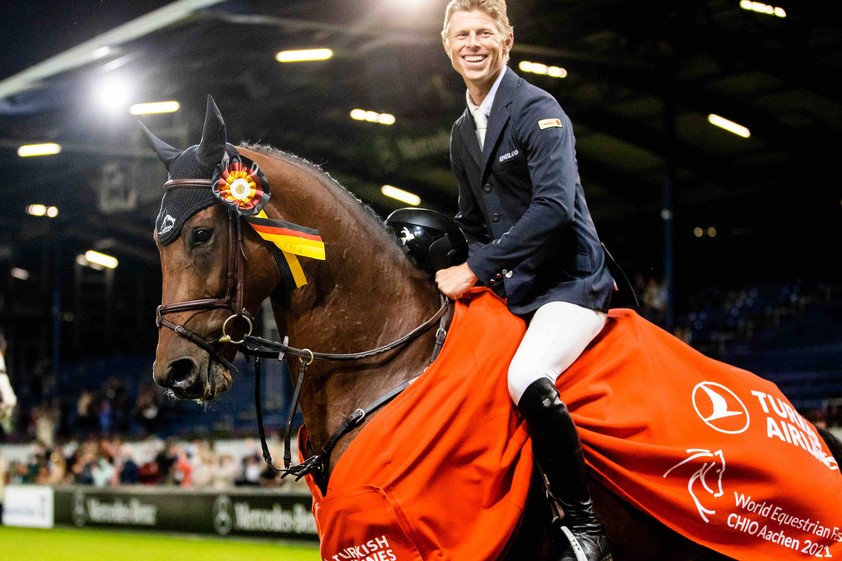 In the first round, Philipp Schulze Topphoff and his 11-year-old grey mare, Concordess NRW, set the early pace, going clear in a time of 84.86s. The German’s time was eventually bettered by both Ireland’s Darragh Kenny and his 14-year-old stallion, VDL Cartello, and Pieter Devos of Belgium and his 13-year-old mare, Mom's Isaura, after they completed the 17-fence course fault-free in 84.37s and 84.77s respectively.

First to go, April’s winner of the Rolex Grand Prix at The Dutch Masters, Max Kühner, set off at blistering pace, completing the shorted nine-obstacle second round course without posting a penalty in 56.36s. One by one, and without success, the remaining riders desperately tried to better Kühner’s impressive time, which looked increasingly impossible. Daniel Deusser looked to be in contention, but put the penultimate pole down, and Gregory Wathelet was eventually outdone by the last. Jérôme Guery came within half a second of the Austrian’s time, while Luciana Diniz went agonisingly close, finishing just 0.19s off top spot. When Ireland’s on-form Darragh Kenny put three down, an ecstatic Kühner claimed the win, a seemingly perfect preparation for him and his champion 10-year-old bay gelding ahead of Sunday’s Rolex Grand Prix.

Commenting on his Rolex Grand Prix strategy for his Major-winning partner, Elektric Blue P, Kühner, commented: “Tomorrow I will rest him and I will ride him on the flat a little bit. I will feel him and he will tell me what we do next. Either I will just leave him and work him until Sunday, or I will do one more small class, just to keep him a little bit in the rhythm and jumping. Sunday will be very big, so if we go all these days without jumping him, it might be too big in the beginning. He’s a very careful horse, so I’ll probably jump him in one more small round, which will keep him in the rhythm.”

Behind the stable door with:

Tell us about the horses you have here at CHIO Aachen?

We have a seven-year-old named Emir [De Moens Harcour] with us. He is sometimes very excited and nervous in big stadiums. But I think he will show good rounds here in Aachen. A mare named Tolede [De Mescam Harcour] is also here, she will probably jump in the Grand Prix on Sunday. She is a little bit inconsistent sometimes, one week she can win and the next week she can have three discards and we don't really know why.

Then there's a 12-year-old mare named Visconti Du Telman with us, she's really sweet and special. Kevin has been riding her for two years now, and in the beginning it wasn't easy. She always tries hard and learned a lot at the last European Championships. She will jump the Nations Cup here in Aachen. And then we have another mare [Lubie de l'Elan], who belongs to a very good friend of Kevin. Kevin is only riding her for four shows to see what potential she has. He has competed with her at Valkenswaard and at the Brussels Stephex Masters, and most recently at Riesenbeck, where she jumped clear in a 3* Grand Prix. She tries very hard to do everything right.

He’s a really special guy and he knows his horses so well. He reads articles and researches stories because he wants to be the best possible horseman. It’s not easy when we’ve had a bad show, as he can be really hard on himself. He’s also really demanding with himself, which is exactly how he is with me. It’s really nice to work with him because we work together as a team, and we’re constantly trying to improve together. He’s a real morning person, and I question whether he actually sleeps sometimes! However, I’m not a morning person. I’ve been with Kevin for four years now and people told me I would become a morning person, but this is definitely not the case so far! He really cares about me and he helps me at shows when we have a lot of horses and things are busy, like this week at Aachen. Of course, he’s my boss, but we’re really close now and he’s like a friend to me. We both understand when we need to work and be serious, but also when we can relax and enjoy life.

What makes CHIO Aachen so special?

I’ve been watching Aachen on the television since the World Championships was here in 2006, with great horses like Shutterfly. Even on the television you can feel how special it is – the atmosphere, the stadium, so many spectators. If you ask all of the grooms and riders which show they don’t want to miss, it’s this one. When I came here for the first time, I wasn’t disappointed. The noise coming from the stadium was incredible and I thought it was coming from the football stadium next door, but then we realised it was the opening ceremony, which was full of people. Every day it was packed! It’s such an important show for Germany and people are coming here from all over the world. When you do this job and you go to Rolex Grand Slam shows like at Aachen, it’s just different – they’re on a different level. Geneva, Calgary, Aachen and The Dutch Masters – it’s a dream to work at those shows.

What’s your favourite part about being a groom?

Winning, for sure, and this is what keeps me motivated. Honestly, it doesn’t matter if it’s a 1m40 class or a 5* Grand Prix, it’s such a special feeling to win. I’m excited about winning and I love it when Kevin qualifies for a jump-off. There are some periods when nothing goes to plan, so it’s very important to have a good relationship with you boss when times are like that.

What’s your least favourite about being a groom?

Early mornings! And maybe mucking out, but I don’t mind it too much. In general, we have to make a lot of sacrifices, like seeing family and old school friends, but we have so many friends on the show jumping circuit, which makes up for it. Driving a lot isn’t so easy, but at the same time I quite enjoy it – it gives me a chance to be alone and think and dream. 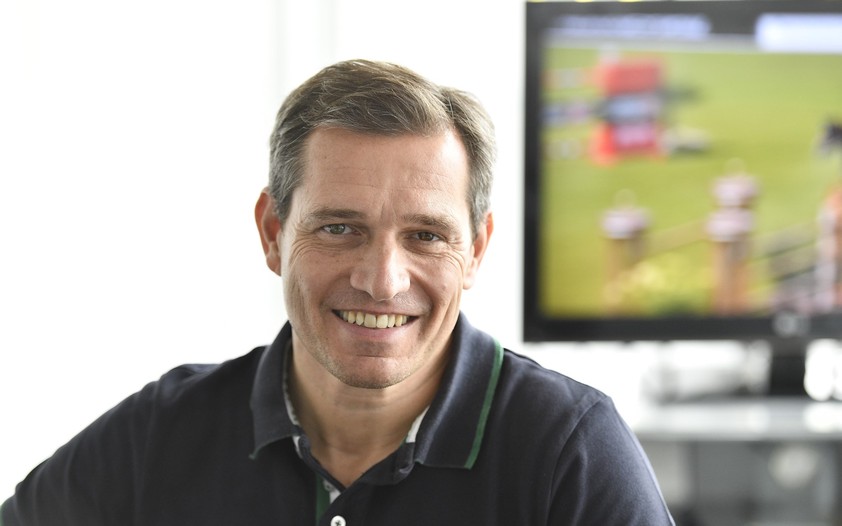 You must be delighted that this year’s edition of the CHIO Aachen is going ahead, after last year’s cancellation due to COVID-19, and then after this year’s postponement?

It’s fantastic to see. I wouldn’t say it’s a normal CHIO, more like a special one, and because of the pandemic it has a special feeling. It has a different feeling in that on one side it’s going to take place, which is very special for the whole team, the spectators and the riders. On the other side, we have to think about the capacity, as we are normally a full house in Aachen, so to see some empty seats is unusual for the spectators, the riders, the media and also for the organisers. We always have to bear in mind that we’re still in a pandemic, so we’re very happy to be able to run this show this year.

Can you tell us a little bit about the challenges that you’ve had to overcome to ensure that this year’s edition of the CHIO Aachen has been able to go ahead?

I wouldn’t say the challenges have necessarily come in the last 18 months. The biggest challenge came in March when we decided to postpone the tournament until September. Getting to that point required making a lot of decisions, which had many consequences on the financial side. For example, building the infrastructure without knowing if the show was going to take place or not. The financial risk this year was much bigger than it was last year when we knew for certain that we would cancel the show. But this year we decided we were going forward with the belief that the show was going to take place, and that we wanted to present the best possible show with the best riders, horses and infrastructure. So, therefore, we’re very pleased that everything worked out well. I’m a very positive person, so I prefer to not look back over the last 18 months, but instead to look forward.

How much hard work have you and your team had to put in to make this year’s edition of CHIO Aachen happen?

I wouldn’t say it has been hard work, I would call it a privilege to be able to work as a team for a show with such a huge heritage. The club was founded in 1898 with the first show taking place in 1924, and then the first international show in 1927. With this history in mind, as a team, we therefore have a very big responsibility. It’s unbelievable to see how enthusiastic the whole team has been in being able to deliver an outstanding product, which has really touched me.

How much of a privilege is it for CHIO Aachen to be able to host a Major as part of the Rolex Grand Slam of Show Jumping?

First of all, it’s unbelievable to see that Steve [Guerdat] won last week at Spruce Meadows, and we’re very pleased that he decided to compete here at Aachen. In general, the Rolex Grand Slam of Show Jumping is fantastic – it’s like the Champions League for the equestrian world. Scott [Brash] is the only person to have won it, which goes to show how difficult it is to win, and that makes it very, very special. If you compare it to tennis, just look at what happened last week with Djokovic, who had the chance to win the Grand Slam, but he wasn’t able to achieve it. If you look at each of these four incredible shows, they all have great heritage. It’s not all about the money – it’s about the combined heritage of the horses, the spectators and the riders, and about the places that it’s organised at. This makes the Rolex Grand Slam totally unique for the equestrian world.