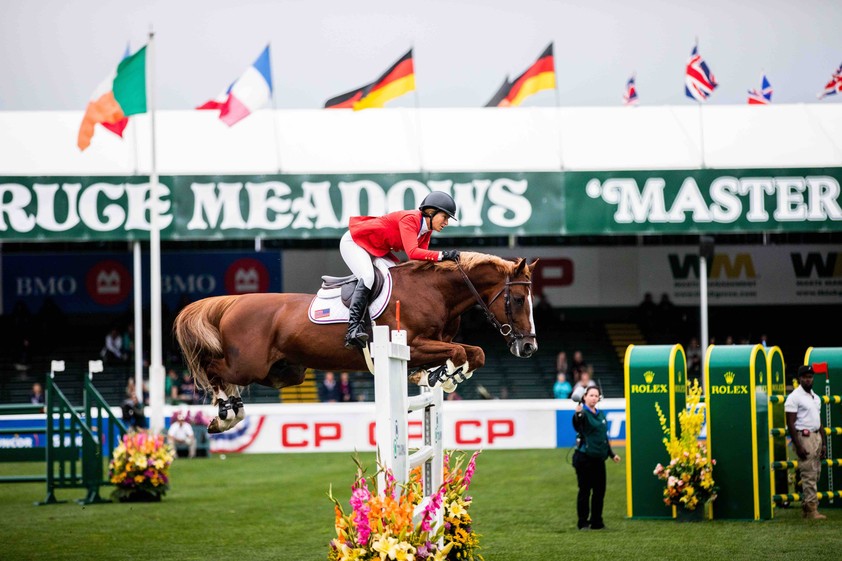 The educated Spruce Meadows crowd now look forward to Saturday’s BMO Nations’ Cup, which will be contested by 10 nations (Belgium, Canada, France, Germany, Ireland, Italy, Mexico, Netherlands, Sweden, and USA). Then, on Sunday, the highlight of the 2019 CSIO Spruce Meadows ‘Masters’ will host some of the world’s best riders and horses, as they compete for the third Major, as part of this year’s Rolex Grand Slam of Show Jumping, the CP ‘International’, presented by Rolex. 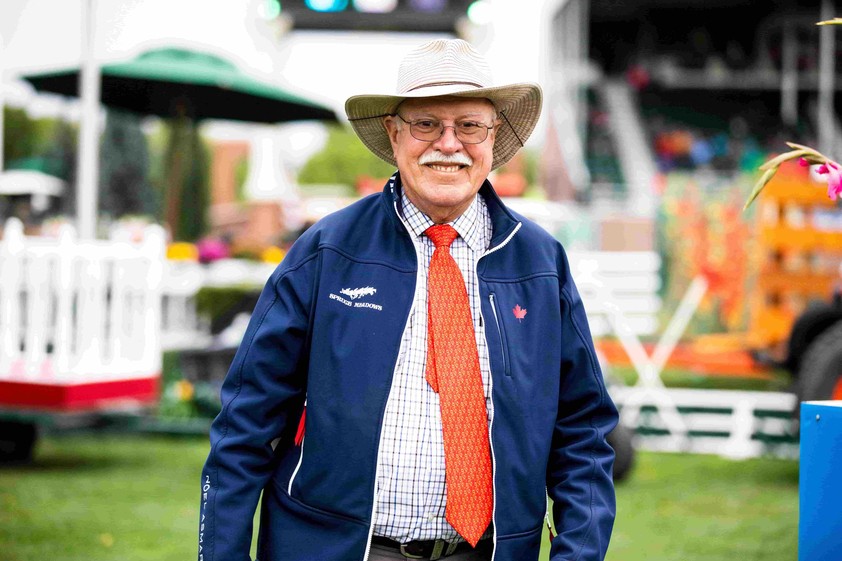 Walk the course with:

Are there any tricky parts to the course on Sunday?

The reality is I try to make most of the fences the same level of difficulty. The start will be big but not too tough. In the first round there will be a triple combination with the dry ditch, which I believe will be challenging for the competitors. I also have included a double vertical after the water jump, which will also be difficult. Then in the second round the double Liverpool could prove to be tricky.

I have heard there could be some rain on Sunday, but in my experience, during my 25 years of course building in Calgary, the forecast can change in five minutes. I know this ring perfectly, so if there is bad weather, I know where the good and the bad spots of the course are, so I can change it to make sure the fences are in the best places.

How many clears are you expecting?

No more than three and no less than one!

Which horse/rider combinations do you think the course will suit?

I think the course will suit the smaller athletic horses, and the bigger horses with lots of power. I’ve tried to give those two different types of horses an equal chance.

Who do you think will win the CP 'International', presented by Rolex?

This is very difficult. We have five of the world’s current top-10 ranked show jumpers competing in the CP ‘International’, presented by Rolex on Sunday. It’s nearly impossible to predict which rider will win. Last year’s winner, Sameh El Dahan always performs well at Spruce Meadows, so maybe he has a chance. But this showground intimidates the horses and the riders, especially when the stands are full of people and the flags are flying. The horses really need experience, so those that have been here before and have performed well will stand a better chance.

How did you first get into course designing?

Originally, I was a national rider in Venezuela. I come from a riding family – my older and younger brothers rode and so did my father. It was, in fact, only my older brother, who was professional, and the rest of us were amateurs. But now, nobody in my family rides! However, the situation in Venezuela deteriorated, and because show jumping is an expensive sport, I decided to pursue a career in construction. I always loved design and creating things, so I guess you could say I’m a frustrated architect. I ended up building courses all over the world for free; however, I started doing too much and was losing money, so I knew I had to start charging for my expertise to make a living.

Then I started making a living out of course designing. I remember there was a year when I worked at 42 shows across the world, with only 10 weeks resting – I was living out of my bag. These days I’m still working at a lot of shows, but a large part of my job is also overseeing the designing and advising organising committees.

What are the biggest challenges you face?

A constant challenge for course designers is having enough material to work with. However, the material I and my assistants have at our disposal at Spruce Meadows is exceptional – plenty of fences and a wide variety of obstacles. Spruce Meadows has one of the most complete and diverse collections of jumping obstacles out of any show I’ve designed at, including fences from the Olympic Games, European Championships, and Pan American Games.

My challenge here at Spruce Meadows is to ensure that the course for the CP ‘International’, presented by Rolex on Sunday is big and wide, and that it is the signature of the whole year. The challenges I face are made easier by the fantastic team of assistants I have around me. They have a lot of experience working with me and they know what I like, and the support the offer me is invaluable. 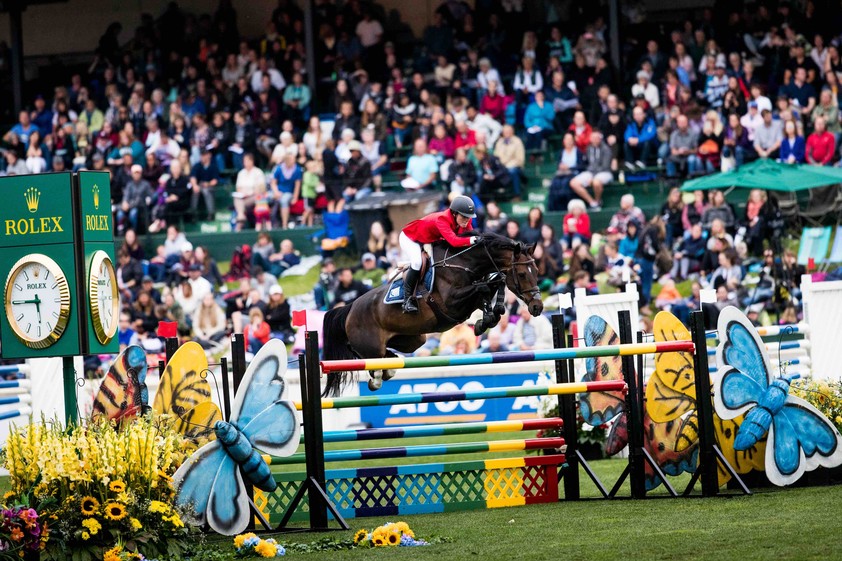 You grew up in Calgary. Presumably it’s a dream come true to be competing at Spruce Meadows?

To be part of the ‘Masters’ and to be one of the five representing Canada this week is a real honour. Calgary is my hometown and Spruce Meadows is my home show, so I’m grateful to be part of such a big week.

Have you ever contemplated a career away from equestrianism?

I think I’ve always thought about going into the family business, and that’s something I wouldn’t rule out in the future. I’ve worked there in the past doing terms in between the horse shows. But I think right now, my career with the horses is going so well that it’s hard to see outside of the next show and the next season, particularly with some of the goals I’m focussed on with the horses right now.

The atmosphere here is one of the best in the world; how does it feel to compete here in front of your home crowd?

It’s incredibly special. First off, there are many people in the crowd I know, including friends and family. But also, in Calgary, we have a very educated show jumping crowd. There are some people who have been coming to Spruce Meadows for decades and they really understand and appreciate the sport, so to have a great round in front of such a passionate crowd, it’s so much more special than competing in front of some empty stands.

Which horses are you competing with this week? Can you tell us a little bit about them?

I have two FEI (CSI 5*) horses with me this week, who are both 10-year-olds – my mare, Catinka, and a gelding called Valentino. I’ve had both horses for a little while now, Catinka since she was seven, and Valentino since the very start of his ninth year. They’re wonderful, very athletic horses, with incredibly big hearts.

Catinka is a real diva. You could fall out with her, if you were having a fight on the flat, but when you walk into the ring, she’s a lion. She’s not a big horse, but she jumps pure heart, and she’s got great technique. She’s an overachiever when you look at her stature, as she’s not very tall, but the feeling is like you’re riding a giant.

Valentino is so sweet. He has actually got quite a cheeky personality, but when you go into the ring he’s very loyal and talented, and has been an incredible second horse to have here this week.

What is your advice for someone who wants to become a professional rider?

If you’re looking at a career in equestrian sport, you really have to focus on how much you love the horses. This isn’t something for you, if you’re only attracted to the lifestyle or to the glitz and the glamour of being an athlete, as that’s not what it’s like. At the end of the day, you have to be passionate about horses, riding them and their wellbeing; that has to be the heart and soul of why you want to be a part of the sport because everything else eventually wears thin.

What’s the best piece of advice you’ve ever been given?

Keep your leg on!

Who is your biggest inspiration? Do you have a show jumping idol?

There are a couple of riders I’m incredibly in awe of. One is Beezie Madden, while another is Laura Kraut. I think they’re not only two of the best female riders in the world, but also two of the best riders in the world, hands down. They really demonstrate that you can be at the very top in this sport regardless of whatever background you come from. And I really appreciate the fact that we’re a sport, in which men and women compete equally. They are two of my role models, who really show women that you can be at the top.

What’s your goal for this year?

My goal for this year is to continue to put in really great results in the Grands Prix. I’d like to be representing Canada at the start of next year. If I can put in some big results in the 1.60m classes this week then I think that really demonstrates that I’ve got what it takes to be part of the team going forward in advance of an Olympic year.

How has the Rolex Grand Slam of Show Jumping enhanced the sport?

To have the Rolex Grand Slam of Show Jumping makes the sport even more of a showcase that gathers the attention of the crowd and the public.

What is your show jumping dream?

My show jumping dream is to be in the top 12 of the CP ‘International’, presented by Rolex here at Spruce Meadows.