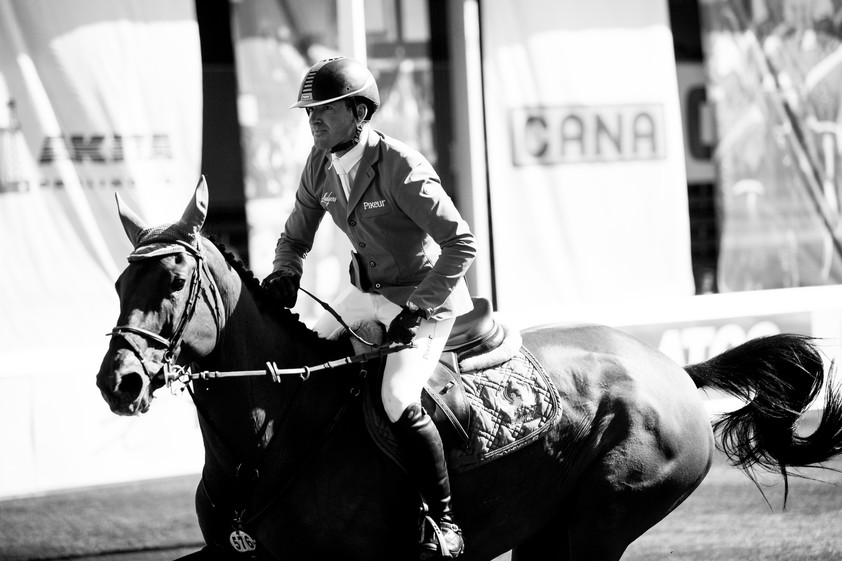 We caught up with German rider, Philipp Weishaupt after he and his 12-year-old bay Sansibar mare jumped double clear to win the 1.60m Cana Cup at the Spruce Meadows ‘Masters’

What were your tactics going into the jump-off?

I knew that my horse has a big step so I left out strides when I could, and I was aware that I’m not that good at turning her. In the end the turns weren’t as bad as I was expecting, and I think she turned better because she got used to it from the first round when the time was tight. I knew I had to gallop and set a fast time, but not crazy fast, just enough to put pressure on the other riders, and luckily it stayed like that.

How did the course feel today?

The course was tough and challenging especially with the time allowed, which was super tight. It’s always tight here, but that time allowed was short, and that’s why it caused a lot of rails in the first round for so many riders. There was a tough combination at the end, and overall, I’m happy she jumped so well.

How did Sansibar feel going into the jump-off?

She gave me a good feeling in the first round and she loves those big grass arenas.

How will you prepare for the CP International, presented by Rolex on Sunday?

I realise that there’s a slim chance of winning the CP International, presented by Rolex two years in a row, but if I don’t try the chance is zero. L. B. Convall is fit and he loves jumping here, and I feel he’s growing and comfortable.

I jumped L. B. Convall yesterday in a 1.50m smaller round to school him with some time faults. I did the same today to give him a nice gymnastic work-out and although he got time faults again, he felt good. I’ll now give him two days off before the CP International, presented by Rolex, but just a little bit of dressage so he’s fresh for Sunday. 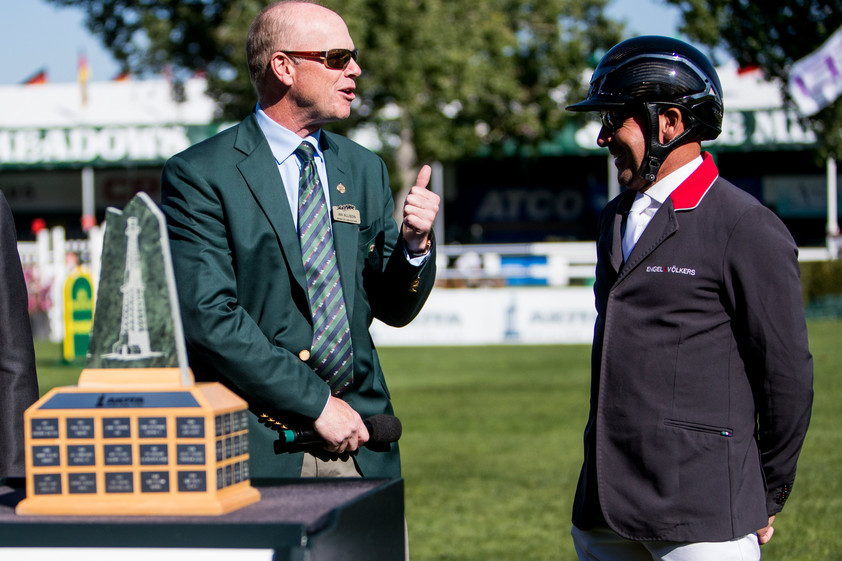 Words from the organiser with Ian Allison

How much do you think the Rolex Grand Slam of Show Jumping is helping to give the sport of show jumping the global recognition it deserves?

When the Rolex Grand Slam of Show Jumping was launched in April 2013 the partners had a collective vision, which they wanted to make a reality. A huge amount of work and commitment has gone into the Rolex Grand Slam over the last five and a half years to build it to where it is today. Through the initiative, equestrian and general sporting fans have been treated to extraordinary levels of competition. We’re thrilled at how the athletes have embraced the Rolex Grand Slam and how the media now recognises the four Majors and what they mean to the sport. We were also very lucky that Scott Brash won the title so early on, which demonstrated that it was possible to win the Rolex Grand Slam. Since then it’s been very interesting how athletes have prioritised the four Majors and how their horses are ultimately planned around them. With all of this said, the Rolex Grand Slam has captured the attention of general sports fans, who I believe now place it alongside its tennis and golf Grand Slam counterparts. It’s become a significant global sporting event, and none of this would have been possible without Rolex aligning with the vision so exquisitely.

What makes Spruce Meadows such a special event for you?

Our founder describes Spruce Meadows as being a very simple recipe: good friendship, good commerce and good sport. Those principles can apply to all stakeholders, whether they be media, athletes, corporate partners, our fans and our volunteers. This venue dates to its opening in 1975 with a lot of the heavy carrying done by the volunteers – the Pegasus Club. There’s a photo of a small band of volunteers from that opening, many of whom are still with us today. Some are in higher profile positions, while others are back of house in transportation, hospitality, parking and tournament operations roles. We have a full-time staff of close to 100 people, which swells to over 1,500 when Spruce Meadows is at full sale for the ‘Masters’. Without our dedicated volunteers this show simply wouldn’t be possible, and that’s what makes Spruce Meadows so special for me.

How exciting is it for Spruce Meadows that a Live Contender of Marcus Ehning’s stature has chosen to come to compete at the ‘Masters’?

Marcus Ehning is among the all-time greats of this sport and I can say that having seen virtually all the greats compete at Spruce Meadows. His World Cup and World Equestrian Games titles, his recent victory in the Rolex Grand Prix at the CHIO Aachen – he’s achieved all of this with different horses through different eras, which is a phenomenal achievement. So, to have Marcus here and the resume that he carries with him, and for him to prioritise this show so close to the WEG is really testament to how far the Rolex Grand Slam of Show Jumping has come. It won’t be easy for him, as his fellow countryman and reigning champion of the CP ‘International’, presented by Rolex, Philipp Weishaupt will push him all the way. As well as Marcus and Philipp, other world-class riders have chosen to compete in the Rolex Grand Slam of Show Jumping, such as Beezie Madden and Luciana Diniz, which is incredibly flattering for the management team and those behind the Rolex Grand Slam.

The CHIO Aachen has been compared to The Championships, Wimbledon. Which global sporting event would you compare the Spruce Meadows ‘Masters’ to?

In many ways I’d say it would be accurate to compare the Spruce Meadows ‘Masters’ to the Masters Tournament in golf. I’ve had many conversations with our Co-chairman and Co-founder, Ron Southern over the decades about the operating model of the Masters Tournament in that it’s a little bit independent from the PGA Tour, just like Spruce is far removed from the Euro-centrism of international show jumping. As such, Spruce Meadows has done a lot of things away from the standard operating procedures of many tournaments around the world, as a necessity to survive. Having said that, The Championships, Wimbledon would be an interesting comparison, too. The British aren’t the best tennis nation in the world, but they put on the greatest Grand Slam tournament, in a similar vein to Canada not being the best show jumping nation, but we certainly put on one of the greatest Rolex Grand Slam tournaments! 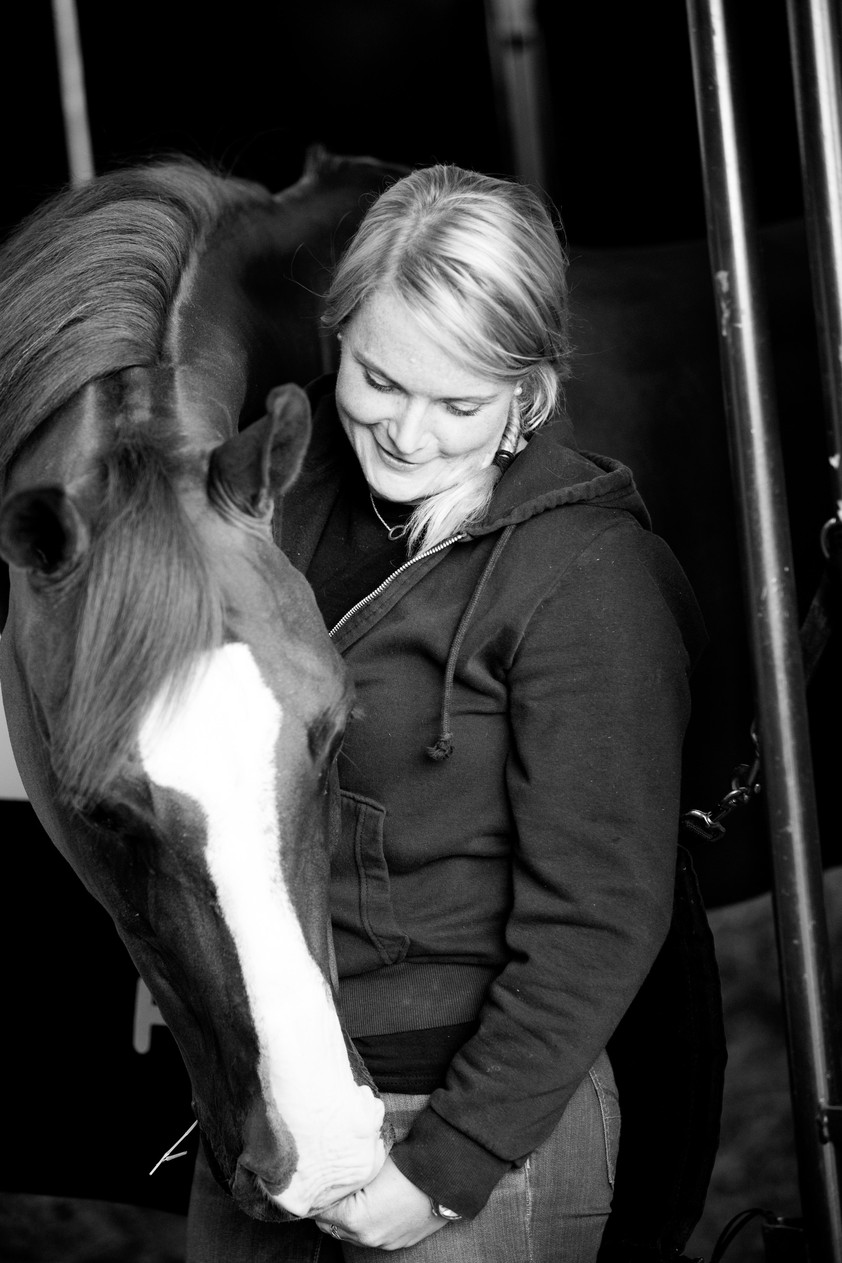 Creedance will compete in the CP International, presented by Rolex on Sunday; what’s his character like going into the Rolex Grand Slam of Show Jumping Majors?

He’s a small horse but he doesn’t really realise it, as he thinks he’s a big guy. He’s a fighter and he tries his best every time he competes. He’s brave and I’d say he’s a bit like Conor McGregor – always fighting! I think one of his biggest quirks is he’s never tired; it’s as though he’s been drinking Red Bull. He sleeps at night and he’ll take naps during the day, but when it comes to doing his business he’s always on the ball, excited and extremely happy.

What do you love most about Spruce Meadows?

I love the atmosphere and the crowds are amazing. The staff, everyone in the office, the stabling, the stewards – they’re all incredible and it’s like one big family. We come here every year for the Summer Series and it’s like a second home – you know exactly what you’re going to get. If you ever need a hand there’s someone there, it’s just really well run.

How do the Rolex Grand Slam of Show Jumping Majors differ to other 5* shows?

The calibre of jumping expected here is like nothing you see anywhere else in the world. Then you add in the height of the jumps and the quality of the horses that are competing – it’s just totally unique. When it comes to a Rolex Grand Slam like this, we just put a little bit more focus into it, as it means an awful lot to do well.

As a top-level groom what’s your show jumping dream?

Honestly, to win a Rolex Grand Slam. Or to win an Olympic medal. I just love to watch the horses do well and develop. We’ve had Creedance since he was seven-years-old – he’s 11-years-old now – and to see him at this level compared to where he was is really satisfying. To see horses like him win at the top level is a real sense of achievement.

Tell me a bit about your career…

I started training as a veterinary technician in Ireland. I then moved to the United States six years ago and met Kent – he rode a horse where I used to work. Kent’s team of horses has grown and we’ve grown with it. We started with maybe five horses, and we now have a string of horses and some young horses coming through. The whole set-up has just evolved and it’s now doing brilliantly well.

If you weren’t a top-level groom what would you be doing?

I’d be working with animals. When I was living and working in Ireland I spent a lot of time with Riding for the Disabled, which I enjoyed – it was a really rewarding experience.