BEHIND THE SCENES WITH...

What does it mean to you as a rider to come back and try and win this Rolex Grand Prix, which is now part of the Rolex Grand Slam of Show Jumping?

Kevin Staut: "It is very emotional, I am very motivated, as is everyone else, especially Jeroen who is on his home ground. I appreciate this show for all of the different atmospheres in the ring – It is amazing. It is difficult for indoor shows to have comfortable areas for the horses and now the stables are really quiet and peaceful, we have enough time and space during the day to ride our horses. Sometimes we don’t mention this enough, but for the top sport we need this kind of comfort. Back to the sport – I am motivated, I have my most experienced horse here, so I hope I can get a good result on Sunday."

Jeroen Dubbeldam: "This show was already one of the best indoor shows in the world but this year in particular, the progress has been incredible. They have done a fantastic job, you can almost ride everywhere and the set up is very chic. It is the first time here for the Rolex Grand Slam of Show Jumping which is something new and special, it brings something extra to the show for us. In terms of my success, this has not been one of my favourite shows. I haven’t been successful at this show yet but things can change. Expectations are very dangerous, you can only try to prepare yourself as much as you can and hope for the best."

What attracts you to the Rolex Grand Slam of Show Jumping?

"The first thing that attracts me is the sport itself. And then at a show like this, with such a high level of riders, a great atmosphere and with this beautiful brand Rolex as the main sponsor, if that doesn’t attract you as a rider then you had better stop riding."

WORDS FROM THE ORGANIZERS...

What does it mean for The Dutch Masters to be hosting the Rolex Grand Slam of Show Jumping for the first time?

"It makes me happy and very proud, and now we have tried to make it look even better than before. We are very happy to be in the Rolex Grand Slam of Show Jumping with the other big names, Geneva, Calgary and Aachen. We are very honoured and very proud."

What was your reaction when you were told that The Dutch Masters would be part of the Rolex Grand Slam of Show Jumping?

"Yes! I think it works out well for both sides, we are happy with Rolex and we hope that they are happy with us, not just now but also in ten years’ time. The pressure is very good – if you think you’re done, well that is the beginning of the end. After Sunday we can start to think what ‘what can we do better next year’. That is the only way to stay at the top." 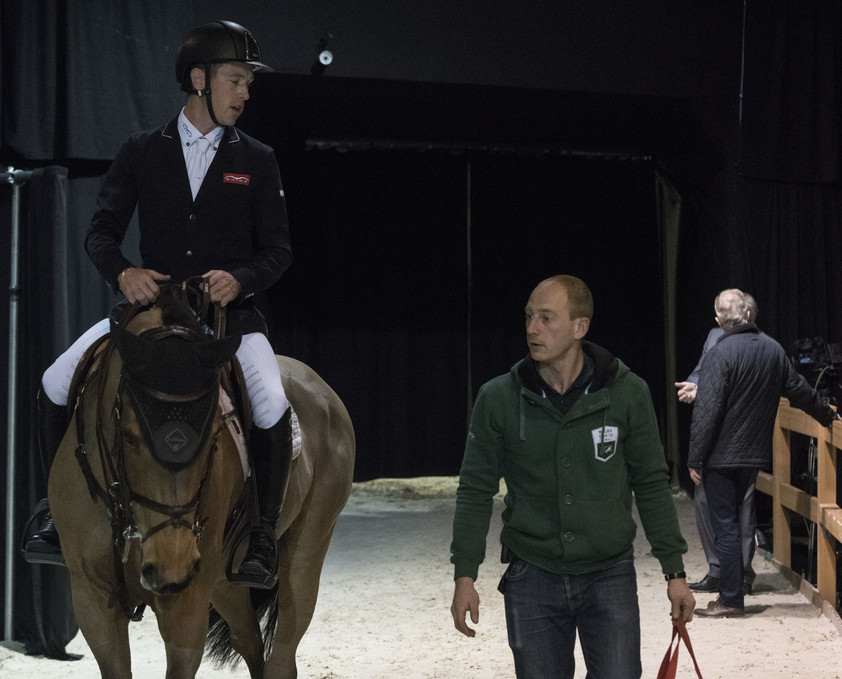 BEHIND THE STABLE DOOR WITH…….

DAVID HONNET, GROOM TO SCOTT BRASH, THE ONLY RIDER TO HAVE WON THE ROLEX GRAND SLAM OF SHOW JUMPING

How do you prepare the horses for a Show like The Dutch Masters, and especially looking ahead to the Rolex Grand Prix?

We have to make a detailed plan three to four months in advance. A Rolex Grand Slam show is very important to Scott, and the team, so we know we have to prepare really well. It is not just me, there is a really big team behind Scott so we all work together. Ursula is pretty easy to prepare because she’s naturally good for the show, she has a lot of experience, is a very calm horse and loves to compete at the Majors especially CHIO Aachen, CSIO Spruce Meadows ‘Masters’ and CHI Geneva. She is older now, so needs extra work ahead of the events to make her fit and lean because she likes her food and can get a bit fat! She also needs to be lean because the jumps are big and its easier for her to jump if she is lighter.

Shelby has been with us for six months now so he is still a bit green. He is the opposite of Ursula, he is fresher, so we have to keep him under control. He needs to be worked hard so that when he gets to the show he doesn’t go crazy. But he is good, he is pretty easy and straightforward.

What are your thoughts on the Majors that make up the Rolex Grand Slam of Show Jumping?

For me, even before I worked for Scott or before Scott became a Rolex Testimonee, they have been the best shows. When you go to any of the four Majors you feel history, even if you are just a groom you get a feeling that you don’t get at the other shows. I like that they are tough courses too! You can’t have these shows every week because it is too hard on the horses but three or four times a year, when you know it is going to be hard for the rider and the horses, but the prize is big, it is great. For me the Rolex Grand Slam is the pinnacle of the sport and is almost untouchable which makes it so exciting. Knowing how hard it is to even win one Rolex Grand Prix, to win the Rolex Grand Slam will really stay in people’s heads and is recognised and respected by everyone. EYE ON THE PRIZE : JOURNEY TO THE ROLEX GRAND SLAM

The 5* jumping action kicked off in style at The Dutch Masters with Germany’s Daniel Deusser proving to be on top form to take the VDL Groep Prize, a qualifier for the prestigious Rolex Grand Prix taking place on Sunday 11 March.

With only three horse and rider combinations competing in the jump off, they are ones the to watch as the journey towards the Rolex Grand Slam edges a step closer:

Winner of two Majors, the Rolex Grand Prix in CHIO Aachen in 2016 and the CSIO Spruce Meadows ‘Masters’ in 2017