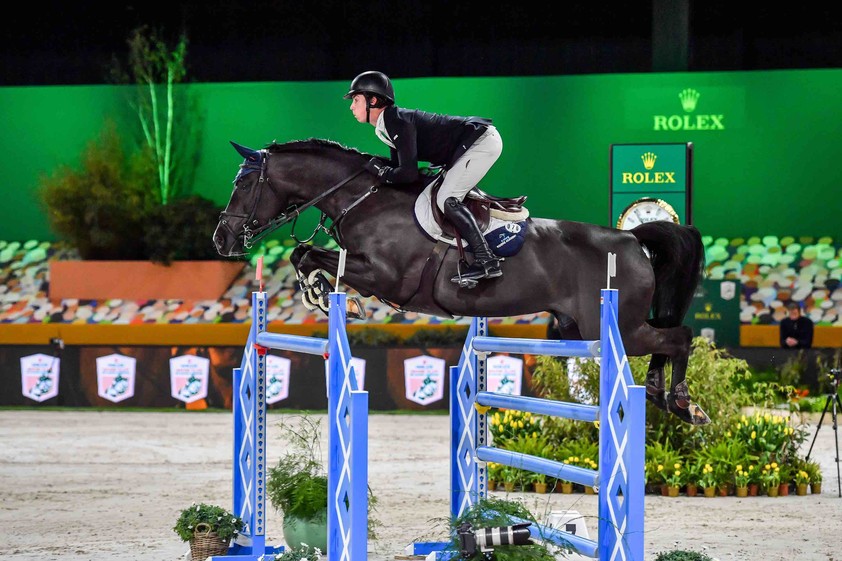 Forty one horse and rider combinations from 15 nations made up the start list for the feature class on Day 2 of The Dutch Masters 2021 – the 1m55 Audi Prize. The star-studded line-up – which included former Rolex Grand Slam Live Contender, Philipp Weishaupt, 19-year-old rising British star and the next generation of show jumping talent, Jack Whitaker, and the on-form American, Laura Kraut – promised global equestrian fans watching online and on television a masterclass in show jumping skill and horsemanship.

After 10 starters, Rolex Testimonee, Kevin Staut and his 12-year-old bay mare, Visconti Du Telman were the only pair to go clear, proof that course designer, Louis Konickx had set a tough 13-obstacle, 16-effort test for both horse and rider. The Frenchman was soon to be joined in the jump-off by fellow Rolex Testimonee, and the only rider to have ever won the prestigious Rolex Grand Slam of Show Jumping title, Scott Brash, who steered his talented 12-year-old stallion, Hello Vincent, effortlessly around the Brabanthallen’s stunning arena. Current world number one-ranked Swiss rider and Rolex Testimonee, Steve Guerdat also went clear, setting up a scintillating and fascinating 11-horse jump-off.

Second to go in the jump-off – a demanding seven-obstacle challenge – Brash was the first of the 11 riders to go double clear, setting off at blistering pace, navigating the course with typical precision, and stopping the clock on 36.16 seconds, a target that looked tough to beat. With just two additional riders managing to go double clear – Marlon Modolo Zanotelli from Brazil and German Christian Kukuk – it appeared as though the Scotsman had proceedings sewn up. However, Jack Whitaker had other things on his mind, and full of confidence, the Yorkshireman and his black mare, Scenletha, shaved a decisive 0.37 seconds off Brash’s time. Whitaker will have watched last to go Kent Farrington with his heart in his mouth, but the American was unable to topple him, eventually slotting into second place.

Thrilled with his win, Whitaker, commented “The feeling is fantastic! It’s what everyone comes here to do, and it’s what I came here to do; but amongst some of these world-class riders it’s a bit surreal when you win, so I’m a bit stuck for words, to be honest – it’s fantastic!

“It’s my first 5* win, and it hasn’t sunk in. But as I say, it’s what you come here to do, and I knew it was just a case of when it was going to eventually happen, and it finally has.

“Scenletha is unbelievable, she’s such a nice horse. She’s so consistent and she’s got a lovely character, but she’s also feisty. Tonight she fought for me a bit, and I can’t thank her enough. She’ll get plenty of polos and pats later!

“I’d just like to say thank you very much to the young Riders Academy for putting me in this position, and for everything they’ve done so far. I just hope that they can continue supporting and helping young riders like me.” 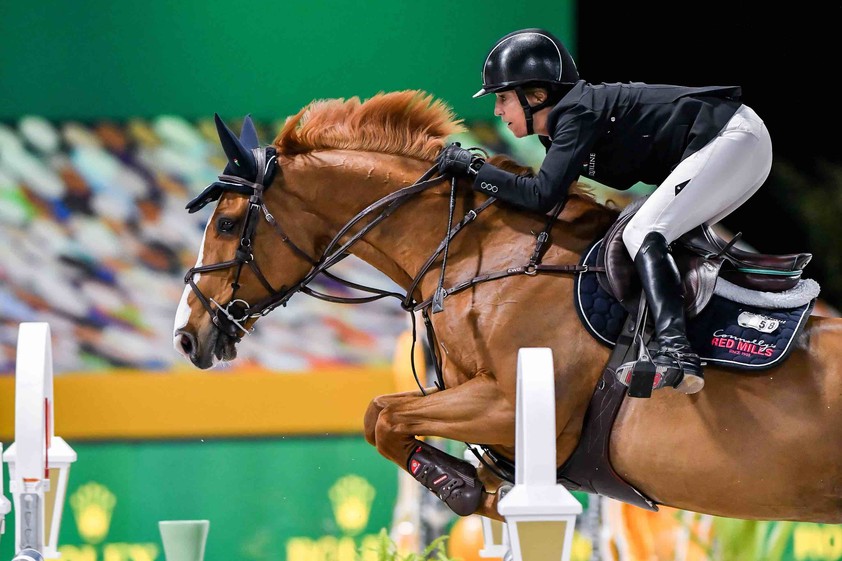 Olympic team champion at Beijing 2008, American show jumper Laura Kraut admits how fortunate she has been to have spent the winter months competing in warmer climes; she explains her Tokyo 2020 ambitions; and gives some insights into her faithful and long-time equine partner, 14-year-old grey gelding, Confu.

The obvious plan would be to achieve a place on the Olympic team in Tokyo for the United States. Between now and when the team is picked in July, all my focus will be on making that happen. After that, Aachen and Barcelona, and whatever comes my way will just be the icing on the cake!

How have you spent the last six months, and which horses have you been competing with?

Over the last six months, I will say that I will have been the envy of many people, as I’ve spent time at the Winter Equestrian Festival in Florida, where the weather has been great. As well as Confu, who I’ve brought here to The Dutch Masters, I’ve also been working with some really nice horses, such as a very lovely nine-year-old gelding named Goldwin, and a new acquisition called Baloutinue, who’s an 11-year-old gelding. I’m very excited about all three of them!

Confu has the best character. He’s got all the great qualities of a good horse. He’s cocky and he believes he’s really, really good. He’s just fun to be around, and I think he’s good indoors normally, so I feel fairly optimistic.

How excited are you to be competing here that The Dutch Masters, part of the Rolex Grand Slam?

I was so excited when I found out that I had been accepted to compete. I applied when the organisers changed the date due to the postponement, and I realised I could potentially be at the show. But I didn’t think I’d be able to get in, so I was just very, very excited to make it here.

Coming to The Dutch Masters, what kind of shape are you in?

I have no nerves coming into The Dutch Masters. I feel good, and I’ve been able to compete more than a lot of the riders that are here, since we were able to go full throttle through Florida. But I know it’s going to be very difficult, and Sunday will be a big test, but I think I’m as ready as I would normally be.

How positive do you believe the Rolex Grand Slam is for show jumping?

The Rolex Grand Slam is fantastic for show jumping. To win it is a massive accomplishment, and it’s famous all throughout the world, which is really exciting for us in the United States. Show jumping fans at home know all about the Rolex Grand Slam and wherever I go, people who follow me realise it’s a big deal to win it – it’s a major achievement.

Over the last year, one of the things I’ve had to learn is that planning has gone totally out of the window. Show jumpers are very much a group of planners – we know where we’re going to be six months from now. But due to Covid-19, we had to put that on hold and take each day as it came. In learning to do that, and I believe it was a positive in that the frustration lessened, as a result of not having something come to fruition. I’ve learnt to roll with situations a little bit more that are out of my control, and if things happen, we’re of course very happy and grateful, but if they don’t then it’s not so catastrophic. 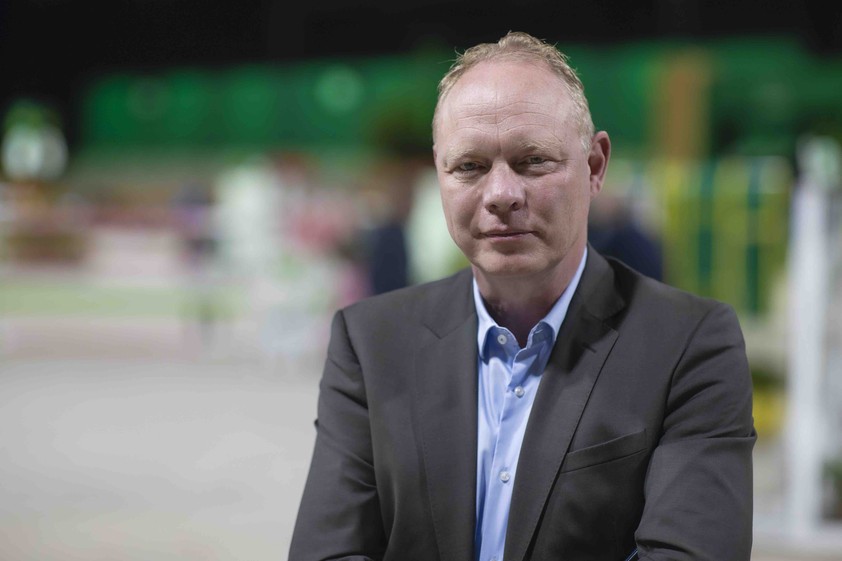 After the heartbreak of having to announce the cancellation of 2020’s edition of The Dutch Masters, as a result of Covid-19, Director Marcel Hunze expresses his relief at this year’s show going ahead; how he believes the Rolex Grand Slam is helping to positively develop show jumping; and who he thinks will triumph in Sunday’s Rolex Grand Prix.

You must be delighted that this year’s edition of The Dutch Masters is going ahead, after last year’s cancellation due to COVID-19 and then this year’s postponement due to EHV-1?

We are thrilled to be running the event right now. It was a tough year due to Covid-19, particularly after the cancellation of 2020’s edition of The Dutch Masters in March, just one hour before the show was scheduled to start. We then had a tough time in March this year due to the Equine Virus (EHV-1), which we didn’t expect. But we never gave up and we’re here hosting an indoor event at the end of April 2021, so we and the riders are very happy – it’s great to be here!

How much hard work have you and your team had to put in to make this year’s edition of The Dutch Masters happen?

It was a very different type of preparation for this year’s show. We’re usually trying to attract as many spectators as possible, but this time we’ve been actively working very hard to keep people out! With the additional Covid-19 and EHV-1 protocols, we had to change the whole set-up, and with the postponement because of EHV-1, we had to start all over again, but thanks to a very enthusiastic team, we managed it, so all is good.

What are your hopes for the sport of show jumping this year?

I really hope that The Dutch Masters marks the new beginning of the global show jumping season, and that all of the other top shows are able to operate this year. It will undoubtedly be tough, but we are especially looking forward to the other Rolex Grand Slam of Show Jumping events being able to follow our lead.

How beneficial is it having Rolex and the Rolex Grand Slam associated with The Dutch Masters?

We are extremely proud to be part of the Rolex Grand Slam of Show Jumping; it was very much our goal from the outset to become the fourth event of the series. Without Rolex, and also our other partners, it wouldn’t have been possible to organise this special edition of The Dutch Masters, so we are very grateful that they are here supporting us, in both good times and also challenging times. As a result, the field we see here in ‘s-Hertogenbosch is amazing, and we’re delighted to have attracted the top five-ranked riders in the world.

It’s a one-year preparation organising The Dutch Masters, and it happens on a multitude of different levels and subjects. At the end, everything has to come together, work well, operate smoothly, and it’s my job to try and make sure everyone involved is happy, particularly the riders, fans and sponsors, so that’s the thing that interests me and keeps me motivated.

Who do you think will win the Rolex Grand Prix on Sunday?