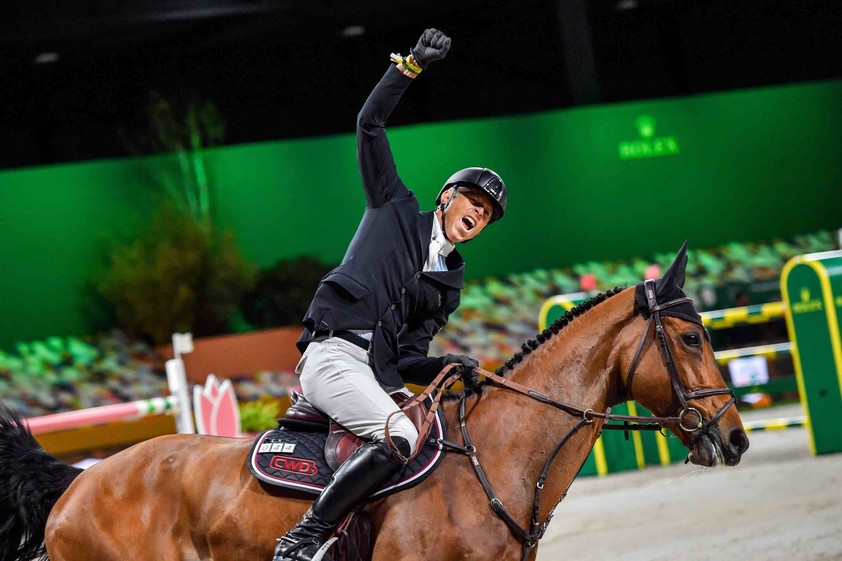 Partnered by his talented grey gelding, Clooney, Fuchs faced formidable opposition from a string of experienced riders, including fellow Rolex Testimonees, Scott Brash from Great Britain, American Kent Farrington, current world number one-ranked rider, Steve Guerdat from Switzerland, and Frenchman Kevin Staut. Other established names, such as German trio, Marcus Ehning, Christian Ahlmann and Daniel Deusser, US rider, Laura Kraut and Peder Fredricson from Sweden, helped to make up a truly impressive list of 42 starters from 15 nations, many of whom were more than capable of becoming the new Live Contender.

With Brash and his 12-year-old gelding, Hello Jefferson, and Farrington and his 13-year-old mare, Austria 2 both retiring, Fuchs and Staut each picking up eight penalty points, and many others failing to navigate the Louis Konickx-designed course fault-free, just eight combinations progressed to the jump-off – a seven-obstacle, 330m final test of ultimate skill, determination and precision.

First to go, Weishaupt set the early pace, jumping clear in a time of 33.71 seconds; however, his lead was short-lived, as Christian Kukuk and his 11-year-old grey gelding, Checker 47 went next, stopping the clock 0.14 seconds under Weishaupt’s time. With none of the following four riders able to better Kukuk’s performance, the Grand Prix’s fate lay with Modolo Zanotelli and Kühner. The penultimate partnership to go, Kühner and his 10-year-old gelding, Elektric Blue P set off at blistering pace, crossing the finish line over a second ahead of Kukuk, etching his name at the top of the leaderboard, where he was to remain after the 32-year-old Brazilian couldn’t quite find enough speed at the last fence, slotting into a very respectable second place.

Delighted with his performance, the new Rolex Grand Slam of Show Jumping Live Contender, Max Kühner, commented: “The Rolex Grand Slam has always been a big aim for me, so I’m very happy that it worked out today.

“I bought Elektric Blue [Elektric Blue P] when he was a two year old. I saw him do one free jump on a video, and I said I like him, and the auction was already running, so we bought him. He’s always done everything very well, he was always a very good horse, and he never disappointed me. He has unbelievable possibilities, as jumping is quite easy for him. He has a good character, and likes to do the sport. At home he gets bored quite easily, so we have a special programme for him. We hack him, and drive him to where he can climb a little bit in the mountains.

“Spruce Meadows and Aachen in September was already on my schedule. It’s still far away, but we will try to make a plan as early as possible. We will aim to take Chardonnay [Chardonnay 79] to Calgary, as he finished third in the last Spruce Meadows Grand Prix in 2019, where he jumped very nicely. And maybe we’ll take Elektric Blue to Aachen.” 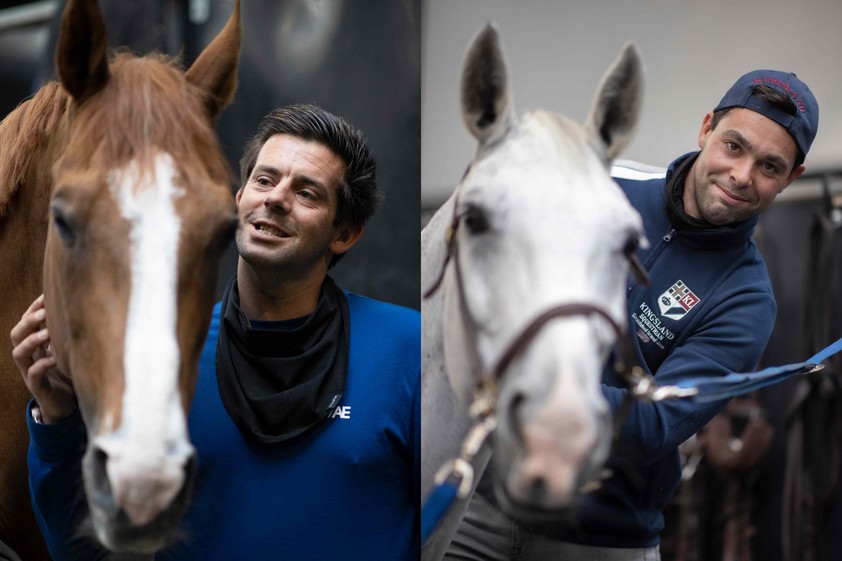 Behind the stable door with:

Sean Lynch, head groom to current world number two-ranked rider from Germany, Daniel Deusser, and Swiss world number three-ranked rider, Martin Fuchs’ head groom, Sean Vard reveal what they love most about their jobs; an insight into the horses they look after; their favourite Rolex Grand Slam Majors; and what they missed the most about not attending elite-level show jumping competitions.

How happy are you to be here at The Dutch Masters and back at an elite-level competition in Europe?

Sean Lynch (SL): I’m very happy to be back. We actually spent the winter in Florida, so it was a bit more of a normal life over there. It’s lovely to be back competing in Europe, back with European friends, and attending European show. Hopefully things can get back to normal this year. I’ve really missed the atmosphere and my group of friends, but the same can’t be said about the travelling!

Sean Vard (SV): Delighted to be back. It’s great seeing all of my European friends again, and back on home turf. We spent the winter in America, but it wasn’t quite the same as being here, especially at a Rolex Grand Slam Major. I’ve really missed the atmosphere and the buzz of the stables, but it’s great to be back, and the big classes are very much the main goals.

What do you love most about your job?

SL: I think it has to be the travelling to different countries to compete at some incredible show, doing something I absolutely love. Being able to enjoy that every single day alongside some great results is pretty special.

SV: The long nights, the early mornings, driving for hours in the pitch black! No, I’m just joking. I love the results, the adrenaline from competing, seeing the horses progress, and the good moments that come with success are amazing.

SL: I absolutely love Tobago [Scuderia 1918 Tobago Z]! He’s a very big character, very easy to look after, with a very big heart. But we have a very talented group of horses at the stable, who I treat exactly the same way as I do with Tobago. Our most exciting young prospect would have to be Mr Jones [Scuderia 1918 Mr Jones] – his jumping is extraordinary and I think he’s going to be a really special horse.

SV: We have a really nice group of horses, with Clooney being the standout – he’s amazing, funny, a bit of a comedian, and great to be around. We’ve got The Sinner, who is also really entertaining, and Leone [Leone Jei], who’s a new young horse from Stal Hendrix – he’s also fantastic with a great character.

What are you goals for this year, and what would you love to achieve?

SL: Just like everyone else, my main goal this year is Tokyo. It would be incredible to go there and win a medal – it’s a huge opportunity.

SV: I’d love to win a Rolex Grand Slam and also a medal at the Tokyo Games – that’s a big goal of mine!

Which out of the four Rolex Grand Slam of Show Jumping Majors is your favourite, and why?

SL: CHIO Aachen! The atmosphere is unlike any other show in the world, it’s just incredible, and I don’t think you’ll find one like it anywhere else. Plus, I work for a German rider, so it makes it a little bit extra special when we compete there.

SV: I have to say CHI Geneva, for obvious reasons. But I’m also a huge fan of CHIO Aachen and The Dutch Masters. In fact, I love all of them, including Spruce Meadows. Can I choose all four?! Ok, I choose all four! 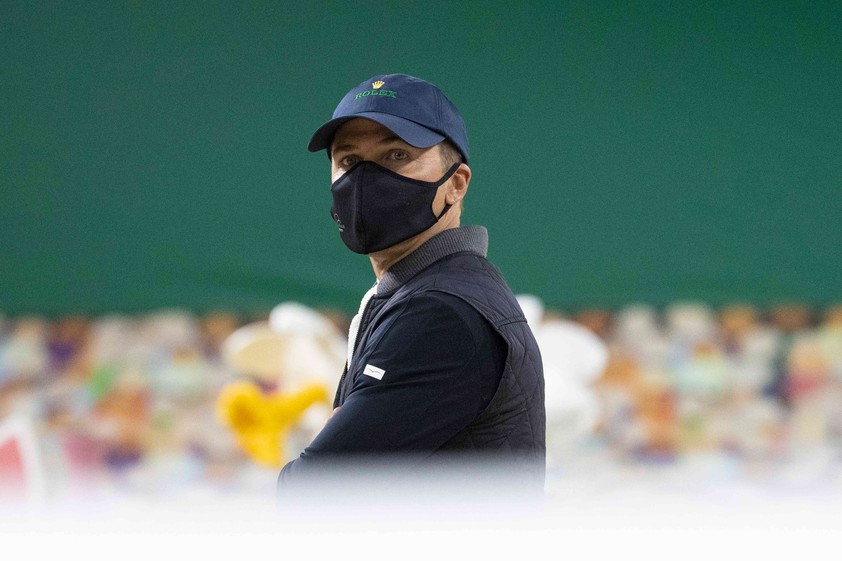 American Rolex Testimonee, former Rolex Grand Slam of Show Jumping Live Contender, and the current world number seven-ranked rider, Kent Farrington explains his goals for 2021; his plan for the Rolex Grand Prix at The Dutch Masters; and the positives he’s taken over the course of the last year.

We’re coming out the other side of a crazy year, so I’m extremely happy to be back at work, so to speak, and back showing. My goals always remain the same: try to focus on the Rolex Grand Slam Majors. We also have the Olympic Games this year, so hopefully that goes to plan, so those are very much my main focuses.

How have you spent the last six months, and which horses have you been competing with?

I’ve been working hard! I’ve been trying to condition my most experienced horses so they’re ready to go, as the show season opens up, and I’m also focused on trying to build-up and develop a group of younger horses. I’ve been at the Winter Equestrian Festival in Wellington, so luckily that season has been able to keep running. I have a stable there and it’s where I live, so I’ve been able to get a lot done over the last few months.

Which horses have you brought with you to compete at The Dutch Masters?

I’ve brought Creedance and Austria, who are two seasoned horses, and they have a good amount of mileage indoors. It’s a bit difficult coming from America, where the horses haven’t competed indoors for a long time, but they both have plenty of experience so I think they’ll be able to pull it off.

How excited are you to be at this Rolex Grand Slam of Show Jumping Major?

I’m really excited, and I’m glad it’s running. I was disappointed after 2020’s show was cancelled, as I was eager to come and compete, but I’m here now, so let’s hope it’s worth it. The Rolex Grand Slam Majors are always the events that I and all of the other riders want to win, so they absolutely provide extra motivation. Having said that, I always want to win!

The last year has reinforced to me that I truly love what I do, that I’m incredibly passionate about the sport of show jumping, and about my horses. I’ve got an incredible team of people around me, and during the highs and lows, those elements never changed, so that’s reassured me that I’m doing what I’m meant to be doing.