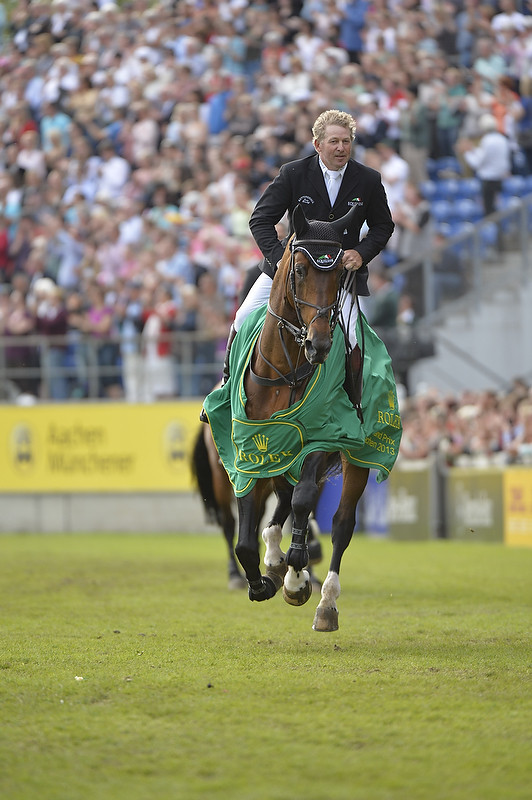 What was the first Major you competed in? How did you do?

Well, I first won the Grand Prix in Geneva in 1978, before it was a Rolex class (ndlr: Skelton won 9 Majors in total).

How did it feel to win your first Major?

As anybody would, it was incredibly exciting, I was very pleased and incredibly happy to be winning them. I had some very good horses in those days, Apollo won two Grands Prix at CHIO Aachen, and then I won the Aachen Grand Prix in 1982 with a horse called Everest If Ever. Lastly, Big Star won the Rolex Grand Prix in Aachen in 2013 when it was part of the Rolex Grand Slam of Show Jumping, so I became the Rolex live contender.

Is there a difference in feeling when you enter the arena of a Rolex Grand Prix at a Major, compared to other Shows?

CHIO Aachen was always a great place to ride, even back in the 80’s it was always packed with crowds, there was always a great atmosphere. Winning the Rolex Grand Prix in Aachen is an incredible feat for any rider to win. It’s probably one of the hardest ones to win, along with Calgary.

Which was your favourite Major to compete in?

I think probably every rider would agree with me in saying that CHIO Aachen is the best Major to compete in, it is like the Wimbledon of Show Jumping or like the Masters in golf, it is the pinnacle of the sport. I think most riders would say this.

Do you think it takes a special and unique type of horse to win one of the Majors that make up the Rolex Grand Slam of Show Jumping?

How has the sport of Show Jumping changed throughout your career?

It’s changed a huge amount, one of the main things I notice now is the time allowed. Nowadays you have to jump the courses a lot quicker than you used to. I watched the video back recently, I think from 1987 when I won a Grand Prix with Apollo, the time allowed was 102 seconds, nowadays you’re in the same field with the same amount of fences, but the time allowed now ranges from 82 and 84 seconds. So, you need to be roughly twenty seconds quicker than what you needed to be all those years ago. The fences come at you quicker nowadays. There are often more fences in a modern course, despite the rings being so small, they now fit around 13 jumps into even the smallest rings. That is added pressure on the horses as they have to jump quicker and more obstacles than they did back in those days.

Would you say that it’s now more important to have a bigger string of horses, rather than one top horse?

Absolutely, there’s a lot more shows now, with a big Grand Prix happening every week somewhere in Europe. So, you need a lot more horses and the high-quality ones are difficult to find, and that’s why they’re expensive.

How did the introduction of the Rolex Grand Slam of Show Jumping enhance the sport?

It’s a very good concept, it’s incredibly difficult to win. I suppose back in the day I would have done it; I think I won those Grands Prix, some of them all in the same year. Scott Brash is the only rider to have done it, it is difficult to win two of those in a season, let alone three or four, so it’s an amazing accomplishment. I think overall, it’s made the sport more competitive, with riders striving to get to the pinnacle of Show Jumping, which is the Rolex Grand Slam.

You competed for so many years, did you still get nervous ahead of big competitions towards the end?

I don’t think I got nervous; all riders get a little bit apprehensive before an important ride because you want to do well. If somebody said that they didn’t feel anything, I’d say they were lying. Riders feel emotions because they want to do well. It’s more adrenaline than nervousness I’d say. I can only speak for myself, but once you start the course, I never noticed anything going on in the ring or anything going on around me. I suppose that’s synonymous with most athletes, I imagine when playing at Wimbledon, tennis players concentrate on what they’re doing and so can’t hear the crowd, it was the same for me.

You had some tough moments in your career – what gave you the drive to keep going?

I always had some young horses that were coming through, so during my injuries, it made me look forward to producing and developing that young horse, which made me want to come back stronger. I had Arko and then Big star, so I always had a couple of good young horses coming along that I thought were going to be good enough, which gave me the drive to come back. But I knew that after Big Star, that I was never going to find any horse that was going to be as good as him again, and also I was getting on a bit in terms of my age, and considering what I’d won up to that point, I knew it was the right time to hang my boots up, especially considering my back was playing up a bit and Big Star wasn’t as sound as he once was. The time was right.

I think we know the answer to this, but which horse was your horse of a lifetime?

Big Star, no doubt. I’ve been very lucky; I’ve had some great horses. It’s very difficult to decide which of them was better, but he was the outstanding one. I’ve had some incredible ones over my time, horses like Dollar Girl, St James, Apollo, Tinka’s boy, Top Gun, Carlo. Some of the best horses in the world at that time, but Big Star was an incredibly special horse, and I’m incredibly grateful to have ridden him.

When you first started riding Big Star, did you know that he was something special?

What is Big Star up to now? Do you still jump him at home?

He goes to stud breeding, then he comes home, we try to keep him as fit as we can. We do a bit of jumping and hacking. He is spoilt and enjoying his retirement.

What parts of competing do you miss the most and least?

Winning is what I miss the most! I miss travelling the least, although I am still doing a fair amount of it with our students and Laura. I do miss taking part. Sometimes I’m watching, thinking to myself “this is a big Grand Prix wouldn’t it be nice to be out there competing”. But I was and am satisfied with what I accomplished throughout my career. I’m not the kind of person that looks back and has any regrets.

With new generations starting to climb the ranks in professional Show Jumping e.g. Peter Charles’ son Harry – what is your advice to them?

The art of the game is picking the right horses, the ones that can take you to the top. You do have to be able to ride them though, but getting the best ones is the most important thing.

Which rider inspired you the most?

There are lot’s that have ridden and are still riding. I would say currently you could look at Scott Brash, Steve Guerdat, and the Philippaerts boys but there are so many good riders out there nowadays that are all inspiring.

How have you kept the horses in training during lockdown?

We’ve just been doing it at home, we’ve built courses at home for the students and once a week we’ll pick a course and practice, it’s been quite entertaining and I’ve enjoyed it because I’ve never spent this much time at home, so the lockdown hasn’t been too big of a problem for me.