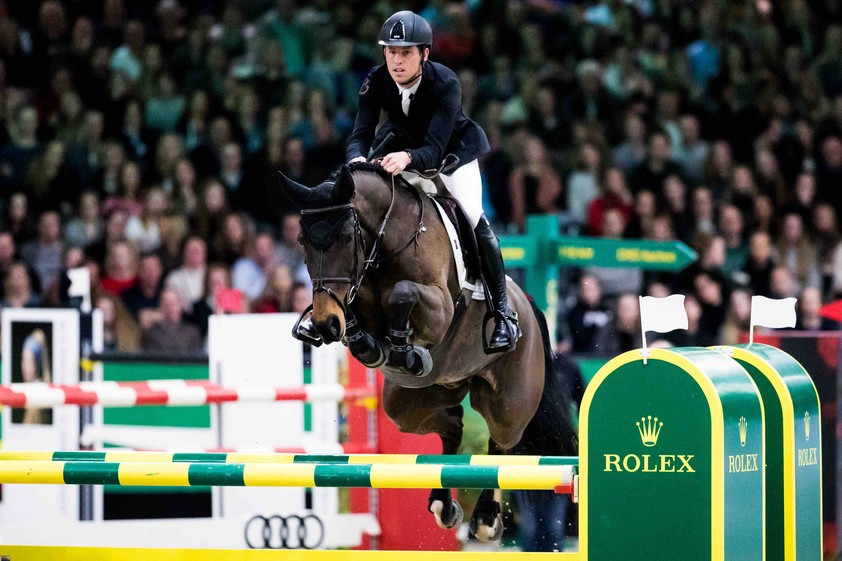 Who to look out in the Rolex Grand Prix

The Dutch Masters 2021, part of the Rolex Grand Salm of Show Jumping, will host the first equestrian Major of the year, and will be held from 23-25 April in the town of ‘s-Hertogenbosch in the south of the Netherlands. After more than a year of uncertainty, due to the COVID-19 pandemic and the recent Equine Virus (EHV-1), organisers of this year’s show are delighted to welcome many of the world’s best riders and their horses to compete at the legendary Brabanthallen over three days of world-class equestrian competition.

The Dutch Masters 2021 has attracted no fewer than six Rolex Testimonees, including British show jumper, Scott Brash, who remains the first and only rider to have ever won three consecutive Majors, thereby claiming the Rolex Grand Slam of Show Jumping title in September 2015. Brash has spent 2021 competing in the Qatari capital, Doha, and in Lier in northern Belgium, and comes to The Dutch Masters hoping to reclaim live contender status.

Joining Brash is fellow Rolex Testimonee and current world number one-ranked rider, Steve Guerdat. Guerdat has a stellar record at Rolex Majors, having triumphed in the Rolex Grand Prix at CHI Geneva in both 2013 and 2015, and the Swiss show jumper will be aiming to add The Dutch Masters Major crown to his enviable list of titles.

As a result of winning the Rolex Grand Prix at CHI Geneva in December 2019, current world number three-ranked rider and Rolex Testimonee, Martin Fuchs comes to The Dutch Masters, as the live Rolex Grand Slam of Show Jumping contender. The Swiss rider has spent the most part of 2021 at the Winter Equestrian Festival in Florida, USA, with his grey geldings, Clooney 51 and Leone Jei, and will do whatever it takes to ensure he remains live contender going into the CSIO Spruce Meadows ‘Masters’ in September.

Rolex Testimonee, Kent Farrington and compatriot Laura Kraut are the sole representatives from the USA at this year’s Dutch Masters. A two-time Major winner (CHI Geneva 2017 and CHIO Aachen 2019), Farrington travels to ‘s-Hertogenbosch with his gelding Creedance and mare Austria 2, and the current world number seven-ranked rider has the necessary experience and aptitude to be confident that he will very much be in the mix in the Rolex Grand Prix on Sunday.

France is represented by four world-class show jumpers, including 41-year-old Rolex Testimonee, Kevin Staut. Winner of the individual title at the 2009 European Championships and currently ranked 21st in the world, Staut brings Blackonda, Viking d'la Rousserie, and Athos des Genets to The Dutch Masters, and will be hoping to add a Major title to his impressive list of career accolades.

Other riders to watch at this year’s Dutch Masters include Belgian show jumper, Niels Bruynseels and Swedish rider, Henrik Von Eckermann, who sit 11th and 17th respectively in the current jumping rankings. Von Eckermann is a previous live contender after winning the Rolex Grand Prix at The Dutch Masters in 2019 with his brilliant 15-year-old mare, Toveks Mary Lou, while Bruynseels won the feature class a year earlier in a thrilling jump-off with his 15-year-old mare, Gancia de Muze.

A young rider to note is 19-year-old Briton, Jack Whitaker, another product of the Whitaker show jumping dynasty, and the next generation of show jumping talent. Whitaker comes to The Dutch Masters having spent the last few months in Vejer de la Frontera in Spain and Vilamoura in Portugal. 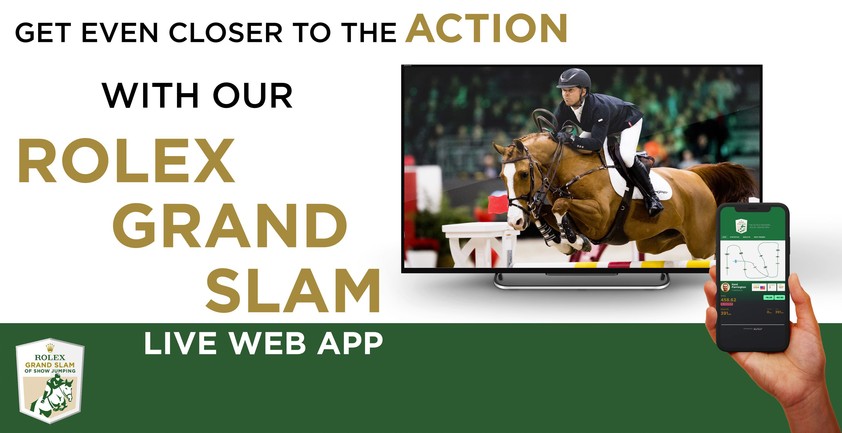 Check out all the stats on 'Rolex Grand Slam Live'

A brand-new web app, designed exclusively by the Rolex Grand Slam of Show Jumping, allowing fans to follow their favourite riders using second screen technology, has been unveiled ahead of The Dutch Masters 2021, the first equestrian Major of the year.

Through the web app, known as ‘Rolex Grand Slam Live’, passionate equestrian fans from around the world will be able to see a host of real-time data, including live timing, number of faults, and order of go, significantly complementing the Rolex Grand Slam online streaming or television viewer experience.

The web app will also give fans access to additional stats, such as percentage of most knocked obstacles knocked, the number of riders out of time allowed, intermediate timing during the jump off, and promises to be the ultimate second screen for equestrian fans wanting to know all about the four Majors that comprise the Rolex Grand Slam of Show Jumping: The Dutch Masters; CHIO Aachen; CSIO Spruce Meadows ‘Masters’; and CHI Geneva.

The ‘Rolex Grand Slam Live’ technology has been developed by a team of experts at high-tech Swiss company, Alogo, which creates analytical tools for the equine industry, including a range of cutting-edge products that quantify athletes’ performances.

The web app will be free and available from the following link: https://rolexgrandslam.alogo.io/ 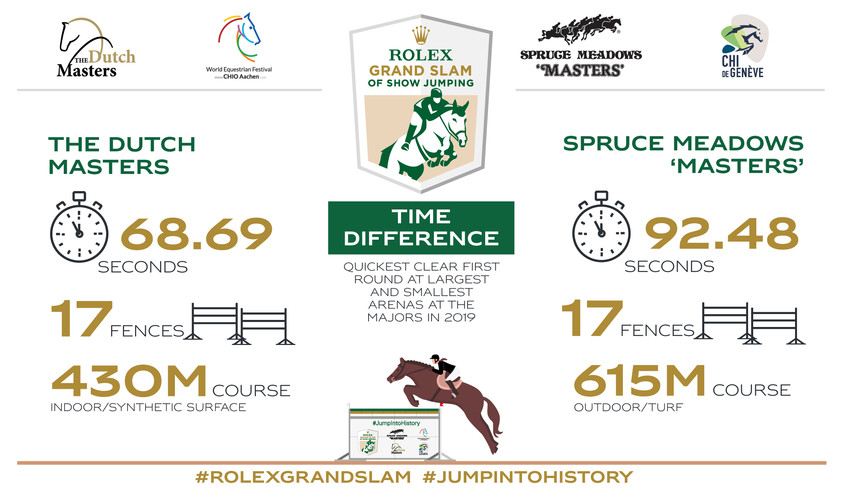 The Rolex Grand Slam is widely regarded to be show jumping’s ultimate challenge and comprises four of the sport’s most prestigious shows – known as the ‘Majors’ – notably The Dutch Masters, CHIO Aachen, CSIO Spruce Meadows ‘Masters’, and CHI Geneva. There is, however, one key element that sets The Dutch Masters and CHI Geneva apart from their German and Canadian counterparts, most notably the two types of arena: indoor and outdoor.

The Dutch Masters’ and CHI Geneva’s indoor arenas use a synthetic footing, while CHIO Aachen’s and CSIO Spruce Meadows ‘Masters’ outdoor competitions are staged on turf. This draws parallels with the four different surfaces used by the Grand Slam tennis Majors – the Australian Open utilises a synthetic hard-court surface; the French Open is played on red clay; The Championships, Wimbledon has iconic grass courts; and the US Open is played on an acrylic hard court.

As for the penalties in show jumping, although they are counted on the same basis both indoor and outdoor, the speed which determines the time allowed for a horse and rider to complete the course is based on 350m/minute indoor versus 375-400m/minute outdoor.

Ahead of the 2021 edition of The Dutch Masters, we spoke to two of the sport’s most acclaimed course designers – The Dutch Masters’ Louis Konickx and CHIO Aachen’s Frank Rothenberger. Konickx has been setting challenges for the world’s most accomplished horse and rider combinations in the indoor, synthetic surface arena at The Brabanthallen in 's-Hertogenbosch since 2008, while Rothenberger has been responsible for creating some formidable tests within CHIO Aachen’s vast outdoor turf arena for many of the same world class partnerships since he joined the World Equestrian Festival’s team in 2003.

Aside from the footing, what are the fundamental differences when designing indoor and outdoor courses?

Louis Konickx (LK): The space in an indoor arena is limited, therefore the line of the course often crosses itself and runs over the combinations and lines; it is always a puzzle to think of an interesting and challenging design. An outdoor arena offers more possibilities for variation and there is space for more cantering.

Frank Rothenberger (FR): The surface in outdoor arenas is sometimes not level, which can give a false impression of the distance between obstacles, whether the course is going uphill or downhill. The light can also cause significant problems, for example, the sun can affect a rider’s and a horse’s sight, while floodlights can create some awkward shadows, so I have to be aware of these elements when I design my courses. One of the obvious and fundamental differences is the size of the arenas – in big outdoor arenas, such as at CHIO Aachen and at the CSIO Spruce Meadows ‘Masters’, a course designer can be much more creative with the tracks, and generally speaking, speed is higher in these types of arena. 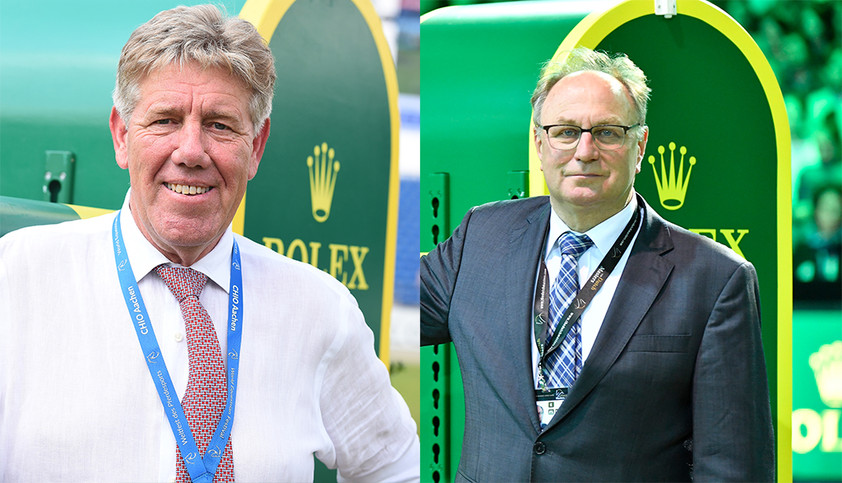 What are some of the challenges you experience when designing courses?

LK: Indoor arenas are all quite equal in terms of shape and layout. Unique fences and the (green) decoration in the arena give the show its own distinctive signature. When I prepare for the show, I pay a lot of attention to this in addition to the challenging lines. Designing courses for the fantastic horses and riders these days is a challenge, and this applies to both indoor and outdoor. I do experience indoor more as a ‘pressure cooker’, though, because you have to work really fast due to the tight programming. In addition, the tension with the enthusiastic public in a packed hall offers an unforgettable atmosphere.

FR: For me, it’s very challenging to create different courses outdoor compared to the ones I’ve designed indoors – it really tests my imagination. In outdoor arenas, slopes can be used to create technical lines, whether the course is going uphill or downhill, so this is a challenge, but it really adds to the course’s character.

What factors, which are out of your control, do you have to consider and be aware of when designing courses?

LK: A course designer always hopes for a nice build-up of tension in a competition with clear rounds in the second half of the competitor field. However, sometimes there are one or two clear rounds within the first 10 riders and the public already knows the course is not too difficult. It can happen and unfortunately it breaks some of the tension.

FR: The weather always has a major influence on the type of courses that I’m designing in outdoor arenas. Under wet conditions, we will try our best to not ask the competitors to perform tight turns so as to avoid the horses slipping. The weather also determines that it’s extremely important to think about distances between the combinations, in that they must be measured even more correctly than in indoor arenas.