Inside the CHI Geneva: Thursday 6 December 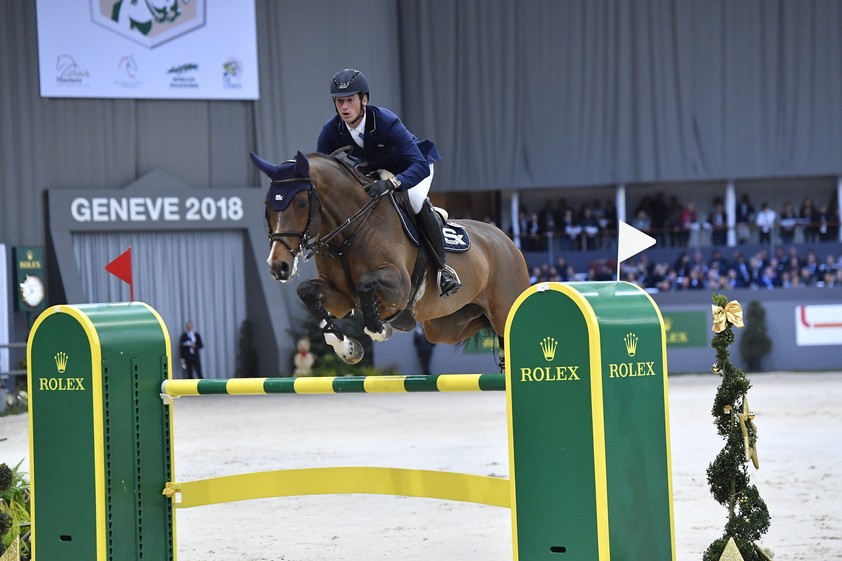 The first qualifier for the Rolex Grand Prix saw nine horse and rider combinations compete in a hotly contested jump-off. Setting the bar high, Daniel Deusser riding Calisto Blue, was the first to produce a clear round with a thrilling time of 37.31 seconds.

Last to go, Pieter Devos, looked on par to emulate Deusser’s clear round but was a fraction too slow and had to settle for second place, with Simon Delestre finishing in third, both excellent contenders for the Rolex Grand Prix on Sunday.

How did the course feel tonight?

Daniel Deusser: The time was really tight in the first round so everybody was forced to ride forwards, and in the end the horses got quite long which accumulated a lot of faults. There were 10 combinations clear and a couple more with time faults, which is a good amount for a jump-off, but it was certainly not an easy class.

Going into the jump-off did you think you were in with a good chance?

Daniel Deusser: To be honest, I was not sure. There were a lot of fast combinations to compete against and I thought that one or two might be a little bit quicker, but I think my clear round put the pressure on and some of the horses were forced to go quicker which made them go a bit flat. I had a good round and was really pleased with my horse.

Looking ahead to the Rolex Grand Prix on Sunday, who do you think your biggest competition is?

Daniel Deusser: There are quite a few really good competitors here this weekend, so it is hard to say. I think McLain Ward and Clinta will go well, Steve Guerdat and Bianca are hard to beat when they are on form as well, it will be a good competition for sure.

Behind the stable door with: Emma Uusi-Simola, groom to Steve Guerdat

One of my favourite parts of the job is the travelling. I really enjoy seeing different parts of world and spending time with the horses away from the yard. I also love the atmosphere that the shows bring, each one is so different but the feeling of excitement you get from the crowd is the same and really special.

Do any of Steve’s horses have any funny characteristics?

Yes, Bianca has such a big character and is a typical mare! At home she is the calmest horse on the yard, she is so easy and laid back, but once she gets to the show, she becomes really nervous and a lot less calm! I think she get’s nervous about competing, but she always manages to channel her nerves in the ring. She is also very picky about what treats she likes and if you give her the wrong ones, she turns her nose up at them.

Albfuehren's Bianca has had an incredible year of results so far, why do you think she is performing better than ever before?

Steve has worked with Bianca for a while now and wanted to make sure he gave her time to grow and develop before pushing her too much. I think this is the key to her success, as it is important to make sure the horse is both mentally and physically ready to compete at this level. She has grown up now and is an amazing horse with so much talent and scope, so we are really pleased that she is doing so well.

Do you have any grooming / travel tips?

I think the most important part of this job and the best tip I can give, is to always make sure the horses are happy. For me, I like them to have freedom and for them to feel like horses not just competitors, so we make sure we give them lots of time in the field to relax and eat the grass. It’s not a secret, but a happy horse will mean a happy rider and that makes my job easier!

What routine do the horses have when they finish competing?

After they have jumped, we use some ice on their legs, give them a very thorough brush to get the blood circulation moving well and with some of the horses we use massage blankets too.

What advice would you give for someone wanting to start a career in this industry?

You have to be sure that you want to work really hard, the days are long and require a lot of commitment. My advice would be that you can always keep learning, so always ask people questions and seek advice from others, as it will mean that you keep improving.

What is the best moment of your career so far?

That’s a hard one as there have been lots of high points working for Steve. I would have to say the two moments that stand out for me are; the first time we won the World Cup Final, I can still remember the buzzing feeling and celebrations, it was so exciting. The second has to be when Steve won the Rolex Grand Prix here with Nino, the crowd’s reaction was incredible, and it was so emotional. CHI Geneva has been voted the ‘World’s Best Show’ nine times, how do you keep the show fresh each year?

Sophie: Each year we take time to speak to people involved in different aspects of the show and ask them what worked well and what can be improved. It is really important for us to gather information, listen to the comments, and use this to progress each year. We are never complacent and no matter how small the detail or adjustment, we want to make sure there is no stone left unturned. It is also important to keep the spirit of the volunteers high and treat them well, as without them we simply wouldn’t be able to produce such a great event.

Alban: I would just add, we give all our heart to the task as we want the people to feel our love of the sport and our ambition is to welcome the riders, grooms, spectators and volunteers – everybody that makes this show so special. I use the analogy: ‘when you invite friends to your home, you want them to feel welcome and have a good time’ and that’s what we try to do at CHI Geneva every year.

You have two show jumping course designers, what were your thoughts behind this decision?

Alban: We think it is very important to have two course designers for the show jumping as we have so many classes throughout the week – including many special classes like the speed class with the natural fences and the combination class – which is a lot for one person to manage on their own. I think it is also vital to have a partnership where you can work together, bounce ideas off each other and I truly believe you will always get better results when you work as part of a team. Our system is to have one Swiss course designer, which is now Gérard Lachat, and an international course designer.

How did the show change when it became part of the Rolex Grand Slam of Show Jumping?

Sophie: We were in the World Cup circuit for a long time, from 1979 – 2012, so it was not an easy decision to change, but I really feel it re-energised the show and gave us a great boost. We, as a team, are so proud to be a part of the Rolex Grand Slam together with CHIO Aachen, The CSIO Spruce Meadows 'Masters' and The Dutch Masters. Before we became part of the Rolex Grand Slam, some of the members of the team who had been here a long time were starting to think about stepping down, however the injection of the Rolex Grand Slam gave them a whole new lease of life and it has certainly allowed us to enter a new and exciting chapter.

Sophie could you talk about your background and how you progressed to become the Show Director?

Sophie: I started off working with the former President for two years and at the end of 2001 he said that he wanted to step down and would I join the team? At first, I thought he was crazy, I was so young (28 years-old) and I did not know if I was ready for such a big responsibility. I took some time to think about it and I decided to accept the offer, then in 2004 I became the Show Director. As a little girl, I would not have dreamed that I would be in this position one day! Even just to work at the show was a dream come true for me, an event with so much history  that welcomes such beautiful horses and talented riders. It was certainly a big challenge, but the team were so welcoming and really believed in me which I am so grateful for. Alban was actually good friends with my parents, and I had always admired his work, so to actually be working with him seemed so surreal to begin with, but his support is something I will never forget and now we are very good friends too.

Alban: We had every confidence in Sophie and we can only say thank you to her. She is such a good Director and brings so much spirit to the team. She has brought 15 years of happiness to the committee and our friendship has grown from strength to strength. I think this organising committee is very special as we are all here for the sport, no one is here for just themselves. We all share a passion to improve the sport and all had a childhood dream to be a part of this special world and we stay faithful to our roots and to our dream.

It is such a historic show, how has it changed since it first started?

Alban: The show started in 1926 but has only been running annually since 1991. Originally, we only had show jumping until we introduced dressage in 1997, then we added driving in 2002, then two years ago we were completely mad and decided to have four disciplines! We wanted to create a mini-indoor Aachen by having show jumping, dressage, driving and cross country. We know that we have reached our limits now due to space, but we love the challenge this brings and are proud at how far we have come. We don’t know what the future will bring, we make sure we listen to our spectators and absorb their feedback, so we can bring them what they want to see in the next editions.

Alban, what are your three best stats about the show?

What advice would you give to someone who wanted to become a Show Director one day?

Sophie: I would say you need to believe in yourself, sometimes it feels like there is a big mountain to climb, but you have to tell yourself you will reach the top. You also need to be open to the other people you are working with and not to think that you have all the solutions. Lastly it would be to show respect to the volunteers because without them we can’t do anything.

Alban: You need to make sure you have good stamina as the days are long and after the work is finished, you must have energy left to dance! I would also say, never forget your childhood dreams and always stay faithful to your passion.