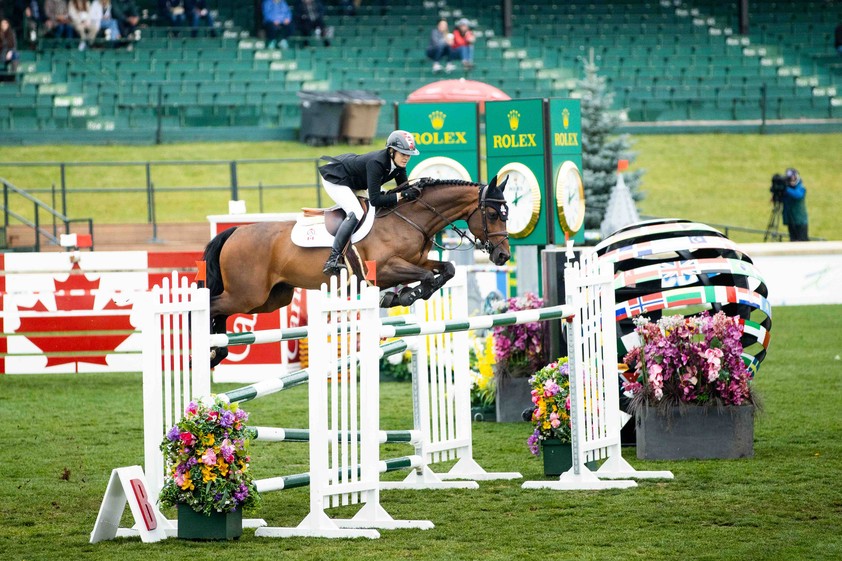 Twenty five combinations contested Saturday’s 1m50 Suncor Winning Round in a wet International Ring following overnight and early morning rain. However, spectators’ spirits were not in the slightest bit dampened, as they were treated to some world-class performances from not only Canada’s finest equestrian athletes, but also a number of leading riders from eight other nations, who descended on Calgary for the 2021 edition of the Spruce Meadows ‘Masters’.

Round 1’s proceedings were dominated by the home nation, with four Canadian riders amongst the 10 who eventually progressed to Round 2, including Tiffany Foster and her 15-year-old gelding, Brighton, Amy Millar and her 11-year-old gelding, Christiano, and the experienced duo of Eric Lamaze and Jim Ifko, who were partnered by 11-year-old gelding, Kino and the 12-year-old La Silla-bred mare, Celine Ls La Silla, respectively. The Irish trio of Jordan Coyle (Centriko Volo), Daniel Coyle (Ivory TCS) and Conor Swail also made the top-10 cut, and were joined in the Winning Round by the talented 23-year-old Belgian, Zoe Conter (Dawa De Greenbay Z), the in-form Egyptian, Nayel Nassar (Igor Van De Wittemoere), and British rider, Matthew Sampson (Geneve R).

But in the end, it was Tiffany Foster’s day to shine in front of an enthralled crowd, after she and the brilliant Brighton did enough to see off a late challenge from Irishman, Conor Swail, beating him to top spot by three tenths of a second, with the current world number 59-ranked rider, Egyptian Nayel Nassar slotting into third place.

Delighted with her long-time partner, Brighton, Foster, commented: “The Suncor Winning Round here at Spruce Meadows is a kind of unique event, as you know you don’t carry your faults, which means you’ve got to get into that top 10, so it’s always better to carry a little bit of rhythm. Brighton seems to love this class, so I just ride my round. The good thing about him is he’s super-fast, so even if I happen to have one down I’m usually in with a shout, but he’s clear more than not!” 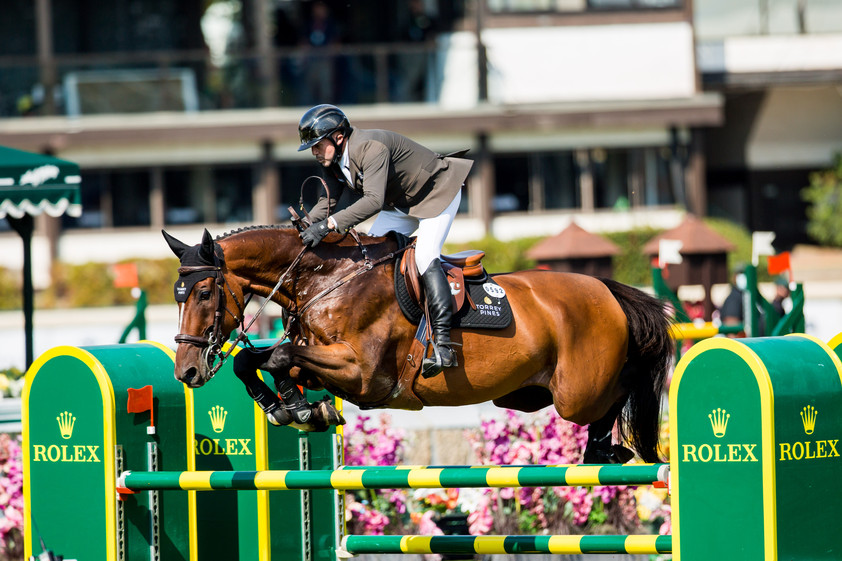 Which horses are you competing with this week? And can you tell us a bit about their characters?

I have Dieu Merci [Van T & L], who is an up and coming stallion. He’s 11-years-old this year and he’s going to be my future star. He will be doing the CP ‘International’, presented by Rolex here on Sunday, and hopefully in the future he’ll be able to put a Rolex Grand Slam Major in his pocket, or in my pocket. He’s going to do great things, this horse – I really believe in him.

I have my young horse, Fine Lady [5], who’s 18-years-old (!) – I don’t know if I have to say much about her. She’s a winner. She’s not as sharp as she once was, but she still loves jumping and we’re planning on keeping her in form just to finish in Geneva, if she will let us do that.

I have a new horse called Kino, who we just purchased, as an addition for this year, as we have some great young horses coming next year. I don’t know him well, so I can’t tell you which way it’s going to go. I had a problem with his previous rider. He came from Ludger Beerbaum originally, and then Rodrigo Pessoa bought him for one of his students and it was never a match. I like the horse and the horse seems to like me.

Why is CSIO Spruce Meadows ‘Masters’ such a special show to compete at?

Spruce Meadows in general is special. Spruce Meadows ‘Masters’ is the Wimbledon for me; it’s the French Open; it’s all of the above. It’s a Rolex Grand Slam Major; it really is the event. This year with travelling and covid and the restrictions, you’re not going to see the familiar faces, but you’re not going to see any less difficulty in the course. I really believe that it’s going to be something that’s incredible.

I just love the sport, I love jumping, I like going fast, and I love the jump-off. I love adrenaline. I love to think I ride as good today as I used to. I’m missing a few beats, actually, but I like to think that! Adrenalin is the one word I would use.

Do you have any secret tactics for the CP ‘International’, presented by Rolex on Sunday?

My strategy was to jump my horse [Dieu Merci Van T & L] in yesterday’s 1.55m and then to leave him alone and keep him fresh, as he’s just travelled here, and then enter Sunday to win.

Who do you think will be the one to beat in the CP ‘International’, presented by Rolex?

I believe Kent Farrington, Scott Brash and Steve Guerdat. It’s like horseracing: I always pick the favourite, but I always lose, so I don’t know! 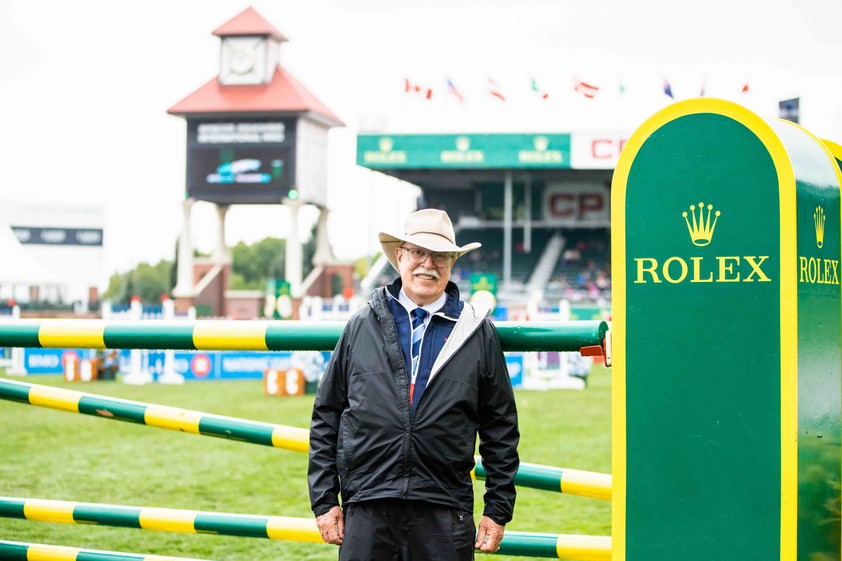 Walking the course with:

I’m delighted and so happy to be back here in Canada. For so many years I’ve been coming to Spruce Meadows and designing courses, but for 2020’s and the first part of 2021’s shows to be cancelled, it was incredibly sad. I really hope the improvements we’re currently seeing continues and 2022 will be back to normal and things will settle down.

How much work has the team at Spruce Meadows put into making this year’s event happen?

They’ve all spent an incredible amount of time to put the ‘Masters’ Tournament on. The team has been working tirelessly to ensure that my visa was granted to allow me to travel to Canada from Venezuela. People have to understand how international this show is, the huge amount of people come from so many different overseas countries. To find show jumping crew was a huge challenge for the organising committee. Spruce Meadows is a seasonal event, which requires a lot of people to make it happen, and finding help wasn’t easy.

Have you faced any challenges this week?

Something that has been challenging for me is Saturday’s BMO Nations Cup, as we only have five teams competing. There have been a number of factors responsible for this, including COVID-19, the recent European Championships, next week’s CHIO Aachen, and the Nations Cup Final in Barcelona. We seem to have everything against us. However, we still have a significant amount of prize-money [CAD$600,000] and a very proud sponsor in BMO, so we will aim to keep the standard as high as normal.

What makes Spruce Meadows different from other international shows?

We see other shows using long distances, very light poles, not a lot of materials and a short time allowed. Here at Spruce Meadows we have big poles, heavy fences, and I believe we’re using more space than any other show. I’m seeing other shows’ 5* courses around the world today with 1.60m and 1.70m oxers in their Grands Prix. On Sunday I will have 1.75m and more, and I’m also using short distances. We like to be this way and we like to be unique.

Can you tell us a little bit about the course that you’ve designed for tomorrow’s CP ‘International’, presented by Rolex?

For many years, I believe the course that I’ve been designing for Sunday’s class is one of the hardest in the world. The feature class at Spruce Meadows has become a benchmark for what the horses are able to jump, and this year I feel confident that we will have an excellent Grand Prix, as I think we have a group of riders here who are absolutely world class. The first round will require a normal level of show jumping. You then have to remember that only 12 riders will progress to the second round, which I think will prove to be the absolute limit to what their horses are able to handle.