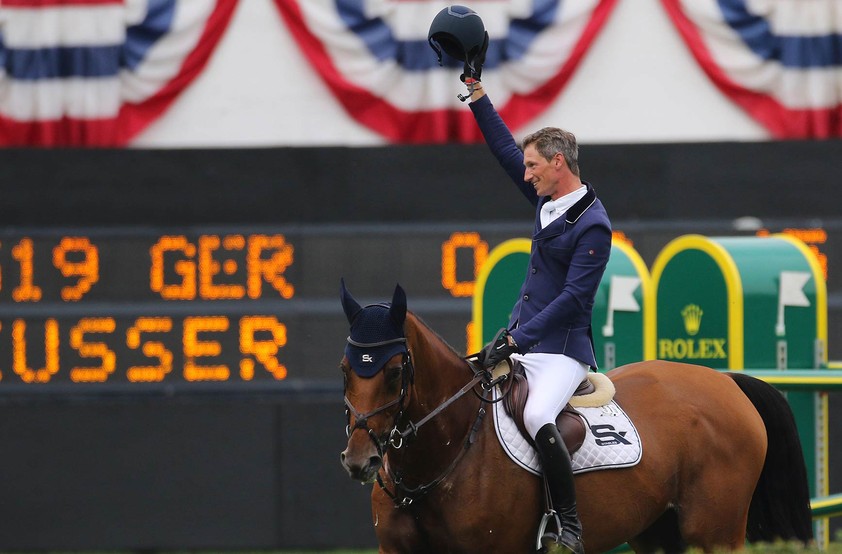 A typically enormous and challenging Leopoldo Palacios-designed course awaited 38 of some of the world’s finest horse and rider combinations, as they contested the pinnacle class of ‘Masters’ week, the CP ‘International’, presented by Rolex, part of the Rolex Grand Slam series, in Spruce Meadows’ iconic International Ring.

In the opening round, no clears after the first 20 starters and a string of DNFs was testament to the gravity of the test that the partnerships faced, with the triple combination after the water jump just one of the obstacles catching lots out. However, 24-year-old Gilles Thomas from Belgium and his 14-year-old gelding, Aretino 13 soon proved that Venezuelan Palacios’ course was rideable, after confidently clearing the 14 obstacles fault-free in a time of 84.72. Despite accruing four faults, Rolex Grand Slam of Show Jumping Live Contender, Gerrit Nieberg and his partner in the Rolex Grand Prix at CHIO Aachen in July, Ben 431, jumped fluently and remained very much in contention. Shortly afterwards, McLain Ward demonstrated his and his superstar mare HH Azur’s class and harmony, notching up the second clear of the round in 83.73 seconds.

The top 12-placed horses and riders from the first round faced a second round comprising even taller fences over a slightly shortened course, with a time limit of 72 seconds. Fifth to go, Martin Fuchs and his 10-year-old grey gelding looked pure class, breezing the course without fault in 69.80 seconds, the first of three consecutive clears with bringing four faults from the first round, which also included Rolex Grand Slam of Show Jumping Live Contender, Gerrit Nieberg and Brazilian Eugenio Garza Perez and his 11-year-old stallion, Contago. However, their hopes were short-lived after 2021’s winning duo of the CP ‘International’, presented by Rolex, Steve Guerdat and Venard De Cerisy, were the first pair to go double clear. Current world number 39-ranked rider Gilles Thomas went next and, much to the delight of the Calgarian crowd, also went clear, meaning a  jump-off was triggered. Rolex Testimonee Daniel “Double D” Deusser and his 12-year-old mare Killer Queen VDM made it three in jump-off. And it appeared that Friday’s winner of the Tourmaline Oil Cup, McLain Ward, would make it four, but agonisingly rolled the first of the double Liverpool. A wide-open third round jump-off was set and the knowledgeable crowd waited on in anticipation.

First up, Steve Guerdat put down the first of the double, crossing the finish line with four faults in 41.70 seconds. Next to go, Gilles Thomas nudged and rolled the CP fence and put the final fence down, crossing the line with eight faults in 42.31 seconds. Daniel Deusser calmly entered the International Ring and meticulously navigated the eight-fence jump-off, crossing the finish line within the time limit, thereby winning the 2022 CP ‘International’, presented by Rolex and becoming the Rolex Grand Slam of Show Jumping Live Contender.

On winning the CP ‘International’, presented by Rolex, Deusser, said: “It is an historic Grand Prix here, it’s a class that I’ve followed since I was very, very small. I watched it on television, and I still have VHS cassettes at home that have the Grand Prix here. I’ve watched it over and over again, and I could never imagine to be here, so to win the CP ‘International’, presented by Rolex here in Spruce Meadows is a fantastic feeling.”

Thrilled with his mare Killer Queen VDM, Deusser, commented: “She had a fantastic week, to be honest. I started the first day with a small class and I was doubting to jump her in a big competition, but in the end I jumped her in the big class on Friday, just because she has never been here in the International Ring. I think it was a good decision today, she jumped three fantastic clear rounds and she will definitely have a big, big dinner tonight and some carrots and sweets!” 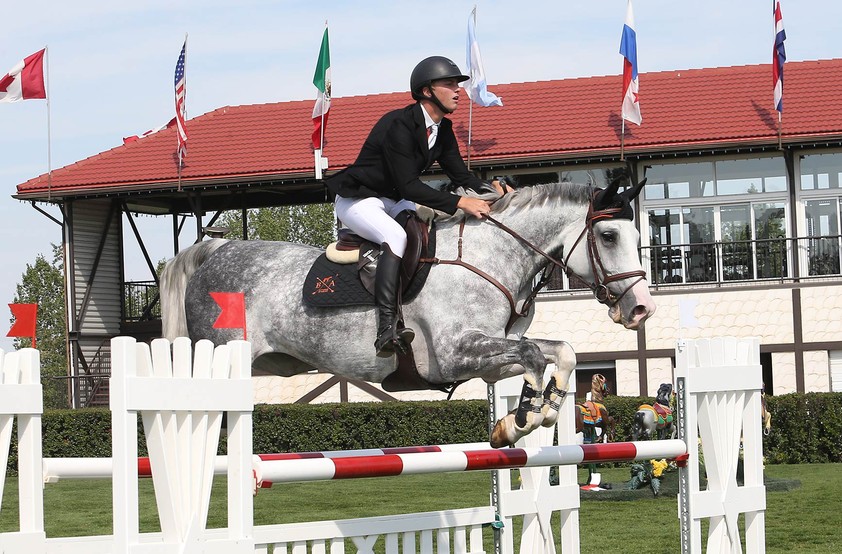 Meet the Next Gen:

What are your plans between now and the end of the year?

As of right now, the older horses that I have here at Spruce Meadows will get a bit of time off and then we’ll be back here in October for Oktoberfest with some of the younger horses. After that, we will have some time off before we head down to Thermal for the winter circuit for the first four months of next year.

What makes Spruce Meadows such a special place to compete at?

I’ve grown up around here, and as a kid you come here and you always dream of competing in the International Ring with the best in the world. The history here, it’s just iconic, and it’s really a dream come true to be able to compete here.

What’s the proudest moment of your career so far?

Who’s inspired you the most throughout your career so far?

Most recently, I’d have to say both of my coaches, Kelly Koss-Brix and Ben Asselin. I’ve really enjoyed them taking me under their wings and really showing me the ropes of show jumping and giving me the opportunity to ride some incredible horses.

What keeps me motivated is that there’s always more, you want to achieve the biggest and the best in the sport, the goal is to be able to jump on Sunday here and to jump in the biggest Grands Prix. All of that motivates me to keep going and keep working as hard as I do.

I have Face to Face here, or as we know him in the barn ‘Frankie’. I love the horse to death, he’s done so much for me and for my riding career. We’ve really built quite the amazing partnership, and I’m just thrilled what he and I have achieved over the summer. He’s been a great horse for me and I can’t say enough good things about him.

The other mare I have here is Castelle [Van Het Beeckhof Z], she’s owned by Telsec Farm. I’ve been fortunate enough for them to give me the opportunity to ride the horse. She’s a typical mare, she has a bit of an attitude and always wants it to be her idea. But she really is an incredible jumper and I think she has big things in her future to come.

Have you got any young horses you think will be future superstars?

I personally don’t have any young horses of my own, but the one that Ben and Kelly have me riding at home called Macgyver, he’s a full brother to Ben’s good horse Makavoy, who’s now retired and is enjoying his good life out in the field. He’s slowly coming along and figuring it out and I really think he has some top potential.

What’s the best advice someone has ever given to you?

Just this past week Ben said to me that I’ve done all of the hard work outside of the ring so at the end of the day I just have to go into ring and compete. He said I have to trust in the work and processes that I’ve done and the countless hours that I’ve spent training, which will pay off inside the ring. I just have to go in the ring and be competitive and believe that I have the opportunity to win every class.

I think it’s been amazing. It’s really brought public support back to show jumping and made people really interested in the sport. I haven’t been to Europe to witness some of the big events there. Being here and being able to see the public’s interest and how into the sport they actually get, it’s been great and it’s really good for the sport.

Away from show jumping, what do you love to do? 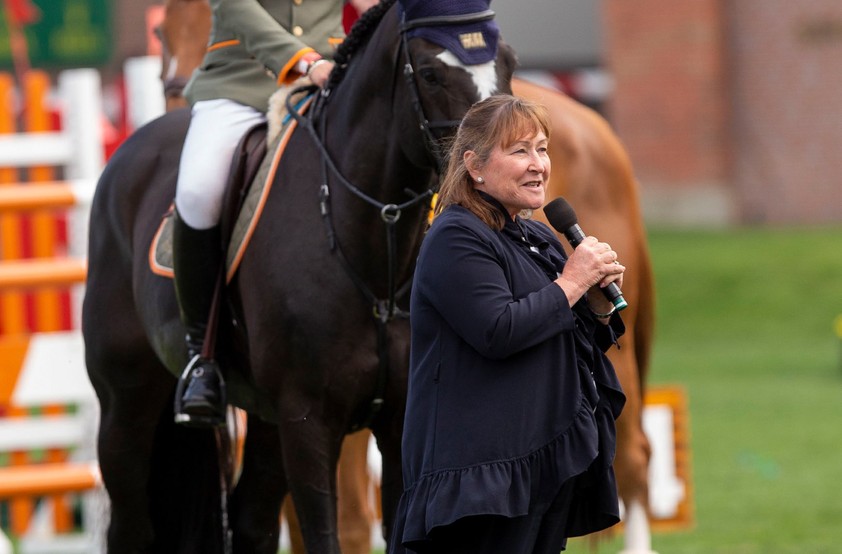 Word from the organiser:

You must be delighted that this year’s edition of the CSIO Spruce Meadows ‘Masters’ is going ahead with full capacity?

Absolutely, it’s so great to be back. Someone must be looking down on us because we’ve got beautiful sunshine, we’ve had amazing sport, and it’s just wonderful to have all the elements come together.

Is there anything new this year that CSIO Spruce Meadows ‘Masters’ has introduced?

The biggest thing that we’ve introduced this year has been the demonstrations and we really wanted to highlight dressage. I think that in Canada there’s been a need to really promote dressage. It’s a very fast growing sport, it’s very elegant and it seems to me that the fans have really enjoyed it. We’ve had two wonderful performers, who are Canadians and are CDI winners. One has just recently returned from the World Championships, while the other is an up and coming athlete. It was kind of fun, but the horses were well matched and they did a wonderful performance on Friday night and they will next kick off the CP ‘International’, presented by Rolex.

What qualities do you look for in team members? And what makes a successful team?

The biggest quality is that the team works together, both in good times and bad. They have to hunker down and really try and find solutions to the issues that are presented, and they should turn those challenges into opportunities. For me, that’s the biggest thing.

What is your advice to someone who wants to get into the sporting events industry?

The biggest advice I would give, which isn’t my strong suit, would be patience. I would also encourage people to set their goals, to understand them and to always work towards them. I believe that one of the biggest fundamental threads for all four of the Grand Slam events is that we’re all in it for the long game. It’s not about a quick fix or immediate results, it’s about building the sport and being committed to the sport, building all of the stakeholders, whether it’s the athletes, our fans, our sponsors, or the media. It’s about keeping all of those elements together and moving the sport forward.

For you, what makes a successful major sporting event?

It needs to be exciting. Each of the Rolex Grand Slam events are unique and they each have a different feel. In the sport right now, I believe that there’s a little bit of a numbing sameness. The Masters in golf is different to the U.S. Open Championship, and in Formula One the Monaco Grand Prix is different to the Dutch Grand Prix. Being unique and being true to your culture and character is one component. Having the ingredients of the top athletes is another. And then allowing the sport and the competitiveness to take over so, as a spectator, you can watch and really enjoy the intensity, and be entertained and thrilled. If you have all of those ingredients, I believe you will have a successful event.