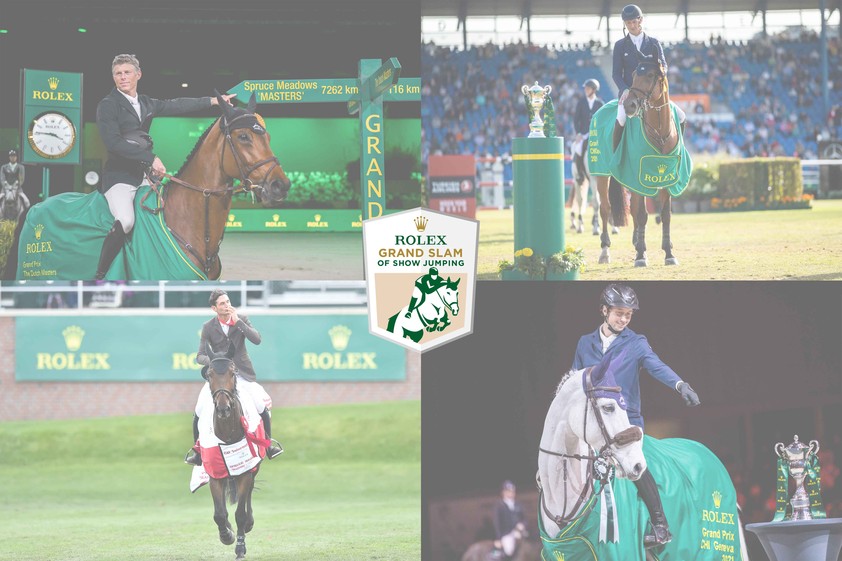 The 2021 show jumping calendar was filled with exceptional entertainment, featuring not only the sport’s most decorated competitors but also welcoming a new generation of future stars who shone brightly at the year’s four Rolex Majors. The Rolex Grand Slam of Show Jumping continues to be at the forefront of every rider’s ambition, none more so than Switzerland’s Martin Fuchs, who starts the year as the Rolex Grand Slam live contender following his stunning victory at CHI Geneva in December.

Opening this year’s Rolex Major season in ‘s-Hertogenbosch, the Netherlands from 11-13 March is The Dutch Masters, latest addition to the Rolex Grand Slam of Show Jumping. The largest indoor show in The Netherlands and one of two indoor shows on the Rolex Grand Slam calendar, The Dutch Masters brings a rich heritage with traditions dating back to 1967. This year, show jumping’s very best riders will descend upon the Brabanthallen for three days of world-class competition, culminating in the Rolex Grand Prix on the show’s final day. Hosting the tightest arena of the four Majors, the trust between horse and rider is more crucial than ever, as the combinations navigate the sharp turns, which give them little room for error. Last year’s winner, Austrian Max Kühner, rose to the occasion alongside his talented 11-year-old gelding, Elektric Blue P, and in doing so claimed his first Major victory.

The second Major of the season, CHIO Aachen – often referred to as the ‘Wimbledon’ of the equestrian world – will once again take place in the North Rhine-Westphalia city in the west of Germany. Dating back to 1924, CHIO Aachen is a show steeped in history and continues to attract more than 350,000 knowledgeable fans across 10 exhilarating days of equestrian sport, which will this year run from 24 June-3 July. One of the most prestigious competitions on the annual show jumping calendar, CHIO Aachen’s highlight class, the Rolex Grand Prix, takes place on the show’s final day and is the one every rider wants to win, etching their name into equestrian history on the iconic winners’ wall. 2021 saw Rolex’s newest Testimonee, Germany’s Daniel Deusser and his phenomenal mare, Killer Queen VDM, take home the spoils after fulfilling a lifelong dream to be crowned champion. Hot on Deusser’s heels was the young, up-and-coming American rider, Brian Moggre, who at 20-years-old displayed incredible levels of skill and determination to fight-off a field of former world number ones and Olympic, World and European Individual champions to secure second place.

From 7-11 September, attention turns to Calgary in Canada for the CSIO Spruce Meadows ‘Masters’. With a reputation of being one of the most demanding courses in the world, it takes a very special partnership to be victorious in the CP ‘International’, presented by Rolex. Rolex Testimonee, Steve Guerdat and his 13-year-old gelding Venard de Cerisy epitomised this, producing two precise and fault-free rounds, the only pair to go double clear and ultimately clinch the coveted trophy. The Rolex Grand Slam has fond memories of this Major, as it was here in 2015 that Great Britain’s Scott Brash became the first winner of the revered Rolex Grand Slam of Show Jumping following a flawless round aboard his legendary gelding, Hello Sanctos, a feat no rider has been able to emulate since.

The Major season culminates in Switzerland when riders return indoors to compete at CHI Geneva. Held from 8-11 December in the Palexpo complex, CHI Geneva is one of the most historic and prestigious international shows and has been voted the world’s best show jumping event a record nine times. Hosting the sport’s most accomplished riders, the Rolex Grand Prix is the highlight of the four days of elite competition. Local hero, Switzerland’s Martin Fuchs rode to victory in 2021 with his 10-year-old gelding, Leone Jei, and made history by becoming the first rider of the competition to win consecutive editions after triumphing in 2019.