Inside the Rolex Grand Slam: Meet the Next Gen with Edouard Schmitz 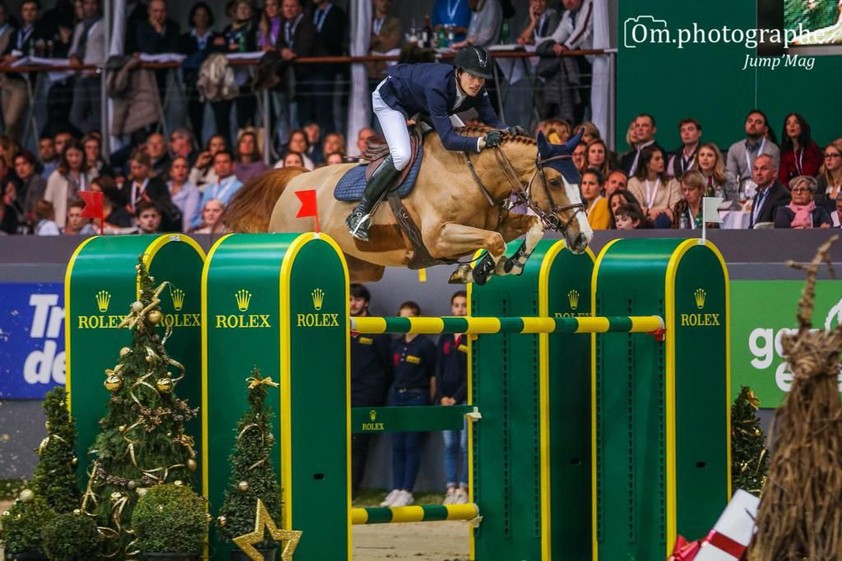 What are you goals for the rest of this year, and what are your plans, dreams and ambitions for 2022?

This year, I was selected to jump in a few World Cups for the first time, which has been an amazing experience. I am competing in the World Cups in Madrid, London and Mechelen, and having a good result in one would be a great way to end 2021. I am going to CHI Geneva, and as it is my home show, I want to perform really well there.

I have been on an upward curve the second part of this year and my goal is to continue this and keep it going. I want to get higher in the rankings – hopefully in the top 50 – that would be a big achievement for me and enable me to jump in some bigger classes. I dream of competing in a Nations Cup. As a proud Swiss and patriot, to wear the red jacket is always something special for me and to have that chance next year would be great.

What has been the proudest moment of your career so far?

My proudest moment happened a few years ago when I was 16-years-old, from the outside you may not think that this is the best moment in my career but for me it is. I was at an international U25 show in Chevenez, and as I was 16 my trainer wanted me to jump in the junior Grand Prix; however, I really wanted to jump in the U25 Grand Prix, as I had a wild card to jump in it, and it meant I could also win a wild card to jump at CHI Geneva. All week I was fighting to jump in the bigger class, and my trainer kept on saying it was a bad idea and I should not jump in it; but I fought so hard to jump in the class that eventually he let me enter into it – and I won it and got the wildcard to CHI Geneva! I was riding Cortino 46, and I think it was one of the proudest moments of my career because I felt like I had proved everyone wrong.

You were (are!) an accomplished junior skier; why did you decide to focus on show jumping?

I don’t really know why I chose one over the other, as I was really passionate about both sports. But I guess in the end I did have a preference for show jumping, and I have never once regretted choosing it over skiing.

Is there anything you’ve learnt as part of your undergraduate studies that you apply to show jumping, and vice versa?

I think that in general that sport is a good life school for everyone. The systematic thinking that you learn in engineering or maths studies are also an asset in several situations in horse riding. I think that in sports we have the tendency – which is sometimes a good thing – to sometimes let emotions get the best of us and we feel more that we think. It’s what is also so beautiful about sport, that you can bring a bit of systematic thinking, which is a good thing.

In engineering you have a problem, and you solve it with the tools that you have, and I think to bring this mindset to horse riding is very valuable. Sports and systematic thinking are very complementary, and my undergraduate studies have really helped me learn this.

Just like tennis and golf, show jumping has its very own Grand Slam. Which of the other sporting ‘Majors’ do you love watching, and which is your favourite and why?

As a Swiss person you can’t say you don’t watch the tennis Majors, especially when you have an athlete as great as Roger Federer. He is just as incredible off the court – he is a very sympathetic person, and the vibe that he gives off during interviews is amazing. He has progressed personally a huge amount, when he first started out, he was the ‘bad boy of tennis’ and he has now turned into the most fair and polite athlete. I feel that everyone has something to learn from his or her path, and to follow that path at the highest level is something that is, of course, extraordinary.

My favourite Major would either be Wimbledon or Roland-Garros, but I think if I was pressured to choose just one it would be Roland-Garros. I think that the tournament is more interesting because Federer does not play as well on clay and so there is bit more pressure.

Who has inspired you the most throughout your career? Is there one rider you idolise?

I don’t like the word idolise – because there is a lack of criticism about idolising someone. Just looking and worshipping someone without questioning what they do, I think can be very harmful. I like to look at all the riders and choose my favourite part that I want to emulate.

When I was a small child, I went to CHI Geneva every year and I would watch the riders on the flat and during the warm-up, and I would pick what I liked most. I would go back to the stables on Monday and try it out on my own. The riding teacher would always say, ‘Edouard, what are you doing?’, because I was very fond of Pius Schwizer at the time, and he would always ride with his elbows out. So, on Monday I would be on my pony with my elbows out, and everyone would ask me what I was trying to do. I look at everyone and cherry pick what I like most and not idolise because I think that idolising gets you into a stagnating state.

My parents have always been really big supporters and are a huge inspiration to me. They never get too deep into show jumping and that is a problem I have sometimes – I get so obsessed with some things that sometimes it is hard to get me out of the situation. My parents have done a very inspiring job because they always know when to pull me out but still keep me deep enough that I care enough to do the work to make it happen.

I think that anything that is related to horses and competition keeps me hungry and motivated. I have always been a competitor ever since a was a small child – I had to be the first one to touch the car when racing to it or I had to have the best grades at school. Some people may say it is a bit toxic at certain times, but I am just a competitive person to my core and I always want more.

Tell us a little bit about your current stable of horses and their personalities… Which of your young horses are you most excited about?

I have the best string of horses that I have ever had this year, and there has been a lot of movement lately on that side of things. I don’t really have that many young horses at the moment – we have built up some seven-year-olds but they are all now eight or nine.

I have had the ride on Quno for the last few months. He had already gained some experience jumping in bigger classes with his previous rider, and I hope I can make the most of his experience to build mine up in the bigger classes.  I have a few horses who are owned by Mr Arturo Fasana, one of which is called Gamin Van't Naastveldhof and I think that he is going to be the real deal. It is always hard to tell at this point, but the way things are going,  it looks really good and we are all really excited about that horse.

Then I have Cortino 46 who I have had since I was 15 and I have competed in five Youth European Championships with him. He has been the most incredible horse for me, I won my first 5* with him, as well as jumping in my first 3* Grand Prix – most of my experience from 1.45m to 1.60m comes from him. Balenciana K is another very good horse that I have, but she is a bit of a lady, she wants to be spoken to politely. She is sensitive so it is not easy to deal with her, but with the right management she will do anything for you.

And then I have Babylone Des Erables, who I also ride for Mr Arturo Fasana, she has competed at 3* level this year and she is a very competitive horse over 1.50. Finally, I have Illusion who is an eight-year-old and my youngest horse, also owned by Mr Arturo Fasana, and I think that he could also be a really good horse. It is always really hard to tell and it is always raw speculation anyway – but if I’m not excited, I don’t know who will be!

What is the best piece of advice you’ve been given?

My previous trainer had a phrase that he always said, and I really like, which is ‘You should never think you are smarter than others’. We would go and try new horses together, and you sometimes hear riders say, ‘I think I could do a better job with this horse’, and it can sometimes be a little bit rude. I think that it is a very good phrase to live life by.

I think it is the most prestigious thing that you can win in our sport. It groups some of the most legendary shows in our sport together. I mean, of course I love Geneva the most – but all four shows are the best of what our sport has to offer, and they all have so much history. There has only been one person to win the Rolex Grand Slam of Show Jumping – Scott Brash – and that makes it the most exclusive prize in the sport.

If you were stranded on a desert island, which three items would you take with you?

That is a tough question! I think probably a book – although I don’t know which one, then my laptop – but there would be no Wi-Fi, and then some pictures of my family and people I love.