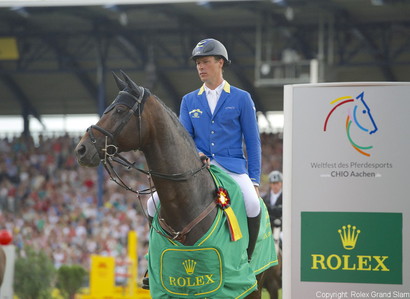 What does winning the Rolex Grand Prix in Aachen mean to you?

Christian Ahlmann: It means an awful lot to me. My victory in the Rolex Grand Prix is definitely my best achievement so far. I came very close several times, and now I eventually succeeded! This victory is worth more than a World Cup victory and worth more than a team victory. It is one of the best and most important jumping competitions – especially for a German show-jumper. The whole world travels to Aachen for this competition! Riding in front of such an audience, amid such a fantastic atmosphere: All of that makes it very special.

What was the best moment for you?

Ahlmann: In terms of the sport, the whole day! Codex One gave me a super feeling in all of the rounds. That already got me hoping that it was going to be a very special day. Then, when I realised I had won and the whole pressure disappeared, joy took its place! The prize-giving ceremony in front of the fantastic Aachen crowd was the absolute highlight and simply a goose bump experience. The icing on top of the cake!

What did your family say about the brilliant victory in Aachen?

Ahlmann: I come from an extremely equestrian sport loving family. So, naturally, everyone was delighted about my result in Aachen! My father actually competed in Aachen years ago himself. Aachen has a very special standing for all of us.

What significance does the Rolex Grand Slam of Show Jumping have?

Ahlmann: I am very grateful that Rolex has been supporting the equestrian sport for so many years already. And it is great that there is now also a initiative comprising of individual shows that already have a very high standing in their own right. This has now been topped with the Rolex Grand Slam! Of course, it is very difficult to win the series. The competition has become very tough, much tougher than in the past. There are a lot more top riders and of course, luck also plays a role in it. But there is no doubt about it, every rider would like to pull it off once! It is something special and is held in high esteem within the equestrian sport scene.

What is your major goal for the future?

Ahlmann: I always had three major goals: To top the world rankings. Win the Rolex Grand Prix in Aachen and to win a Championship title. I have now achieved one of these aims! So, I still have two goals to work at.