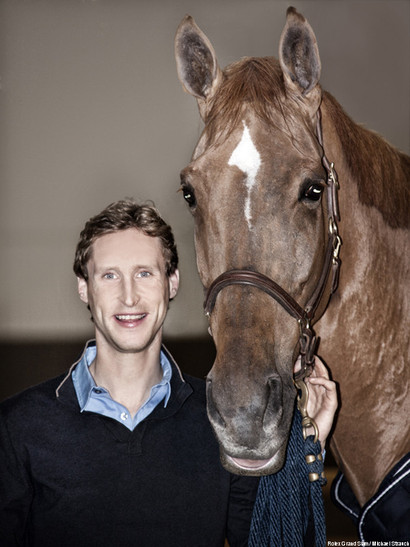 He is the first rider, who has the chance to write equestrian sport history: After his victory at the Spruce Meadows `Masters´, the Belgian rider, Pieter Devos, has the opportunity to become the first show jumper to win the Rolex Grand Slam of Showjumping when the CHI Geneva begins tomorrow.  If he rides to victory in the Rolex Grand Prix he will secure himself 500,000 Euros in addition to the regular prize-money, a further victory in the Rolex Grand Prix at the CHIO Aachen next year would mean he would pick up one million in total.  But even more important than that, he would become a sporting legend.  We talked to him about Calgary, Geneva and his current state of mind.

What was it like beating Steve Guerdat and Penelope Leprevost in one of the toughest jumping competitions in the world, the CN International Grand Prix presented by Rolex at the Spruce Meadows `Masters´?
Phenomenal.  I still can’t really believe it, Steve is the Olympic gold medallist, one of the best riders in the world. It wasn’t until I saw Steve next to me during the prize-ceremony that I knew it was actually true. It was of course the best day in my sporting career so far.

How has the success changed your life?
Many doors have opened up, I have been invited to shows that I wasn’t able to compete at before.  The press is showing increased interest in me, it really has promoted my career.

Did you have a party at home?
Yes, we did actually hold a small party for the first time ever after a victory in a Grand Prix.  Normally you carry straight on to the next show, focus on the next competition, life simply continues.  But this time I wanted to savour the moment and some of my friends said: It is time to celebrate.  And they were right (laughs).

What was the atmosphere in Calgary like for you?
It was the first time I competed there, the first time I entered the stadium was incredible, absolutely indescribable.  It is not a riding arena, it is a massive park.  It was an unbelievable experience.  During the Grand Prix the spectators were sensational they fired me on no end.  Beforehand everyone had told me how unbelievable it was, and I just kept saying yeah, yeah (laughs).  And now? I say to them: It is unbelievable (laughs).  Incidentally, something else made it particularly special winning there for me: I brought on and trained my horse “Candy” myself and a lot of people didn’t think we’d manage to win a difficult Grand Prix.  Well, we certainly showed them (laughs).

Tell me a bit about Candy.
She is not at all spooky and she has made fast progress.  Within no time at all, we were able to move on from 1.20-metre jumps up to 1.40-metre jumps.  And she is incredibly attentive and careful and she always fights hard for me – that is the most important thing.

Will you be riding her at the CHI in Geneva?
I think so.  I am extremely fortunate to have a second horse, namely “Dream of India Greenfield” that I can ride in the top competitions, but I will be placing my bets on Candy for Geneva.

What goes in Candy’s favour?
The hall in Geneva is huge and the mare needs plenty of space, so that is ideal for her. That is why she is going to be my first choice for Geneva.

How do you judge your chances?
It is not going to be easy (laughs).  No, seriously: The best riders in the world will be competing and they all want to win – whereas I am still pretty young and have little experience at such big indoor shows.  But that was the case before Spruce Meadows too, so why shouldn’t it work out again?  Why not be a bit optimistic.

You can write history…
…and be the first rider to win the Rolex Grand Slam.  A wonderful piece of history, which however certainly doesn’t make things easier.  I definitely won’t be completely relaxed in the saddle, because I know how many additional pairs of eyes will be fixed on me.  On the other hand, it does also give you a portion of extra motivation.

Do you think about it often?
I try to blend it out a bit.  It is one of the most exciting, perhaps indeed the most exciting pieces of history that is going to be written in the equestrian sport.  The Rolex Grand Slam doesn’t just stand for the opportunity to win a huge amount of money.  It also gives the riders a chance to go down in history.  Obviously, it is fantastic to have this chance, but it goes without saying: it puts an enormous amount of pressure on too.

You are a professional rider, but you are not dependent on the sport to make a living…
No, I still work at my parent’s company, we produce and export fruit on our farm in Beekkevoort, Belgium…

…where you also train?
Yes, we have just moved into a newly erected stable block.  It is a totally new complex with a large outdoor arena, an indoor arena and 40 boxes.  The conditions are top.  Incidentally, another important point for me is that my girlfriend works there, she runs the stables.  My brother and sister-in-law ride too, we are a real family team.  And the company means we are a bit more independent and can keep some of the good horses.

Riding at top level, building a new yard, working at your parent’s company…
…the past few months and years definitely weren’t boring.  But let’s be honest: I am young and have wonderful opportunities, which you have to grasp and take advantage of and that is exactly what I am doing at the moment.

How did you find your way into the equestrian sport?
My parents had horses, so it was a logical step.  My first pony was called Moonjump, he wasn’t exactly very well behaved.  I don’t know exactly how often, but I fell off that many times that my parents wanted to sell him, but I didn’t want them to.  Ultimately, I learnt an awful lot from Moonjump.

Did you already want to become a show jumper back then with Moonjump?
Oh yes, that is all I wanted to do from the very first second I sat in the saddle: jump. My parents are also show jumpers, so there was no question about it.

You have shown very constant development, improving steadily all the time.  Have you got any specific plans or a major goal in your life?
Simply waiting to see what happens, is certainly not my strategy.  When I enter the ring, my plan is quite simple: I want to win.  If you don’t always try to win, you never will.  My major goal?  Taking part in the Olympic Games, that would be super.

What is your most outstanding characteristic?
I was never given horses that were ready to compete, that I just had to climb on and steer round the course.  In car jargon, one would say: I have never driven an automatic. I have always schooled my horses myself.  So, I would say my most outstanding characteristic is that I feel at home riding a wide range of different horses – because I adapt to suit the horse and not vice versa.  I don’t have one set system that has to work come what may; instead, I recognise the quality of a horse and try to exploit it to the full.  This has enabled me to reach top-level sport with several horses.