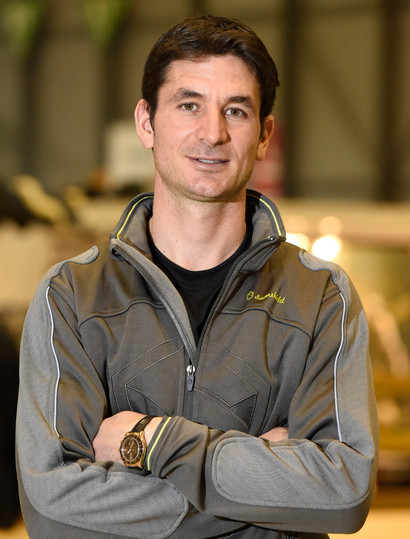 Tomorrow you will be competing in an international class with your long-standing successful partner, “Nino des Buissonnets”, for the last time. After the “Rolex Grand Prix”, a festive ceremony will celebrate “Nino” retiring from competitive sport. When did you decide that Geneva was to be his last show?

Steve Guerdat: It was always clear that when “Nino” retired, it would be in Geneva. It is my favourite show and “Nino” has already won the “Rolex Grand Prix” here twice. The crowd here love him. I made the decision that it would happen this year around two months ago. “Nino” is still in top form at the moment, but he will turn 16 next year and if he were to sustain an injury, it would probably be the end of his career. I didn’t want to take this risk. I wanted him to retire when he is still at the peak of his performance, he deserves that. Tomorrow the people can enjoy him for one last time and then that is it for him. That is the way it should be!

You competed at top level together for six years and have celebrated countless victories. How much has “Nino” contributed to your career so far?

Guerdat: I think in the meantime “Nino” has become a legend, not just because of him winning Olympic gold or because of the two Major victories in Geneva. For example, he also came second in the World Cup Final twice. He never took part at too many shows, but whatever he did, he always turned in top results – and he is still in top form now. He is not only my best horse, he is without doubt one of the top horses in sporting history.

What are your feelings when you look ahead to tomorrow, when you know it is going to be the last time that you saddle “Nino” for a Grand Prix?

Guerdat: I don’t want to think about that now at all. I will ride tomorrow and try to win the “Rolex Grand Prix” again. Everything else will happen afterwards!

Alright, let us concentrate on the sport, then: In this respect, what can we expect from the Major final?

Guerdat: It will certainly be a very difficult course, as is customary here in Geneva. The first round will be a long one and it is necessary to ride extremely fast in the jump-off. There are so many good pairs here, we already saw that in the “Rolex IJRC Top 10 Final” on Friday evening. It is definitely going to be exciting tomorrow, but hopefully luck will be on our side, so that we complete the class on a good result.

You too put in a remarkable performance on Friday and claimed third place in the “Rolex IJRC Top 10 Final” with “Corbinian”. In the spring you succeeded in winning the World Cup Final with this horse. Do you think that “Corbinian” could follow in “Nino’s” footsteps, as far as future Championships are concerned?

Guerdat: “Corbinian” is perhaps not quite as consistent as “Nino” at the moment, but he is an exceptional horse in his own way. He already is one of the absolute top horses now and it is a shame that the people haven’t give him the credit he deserves yet. I mean this horse won the World Cup Final – that in itself is a huge victory in a horse’s career. As such, “Corbinian” doesn’t actually have to prove anything else or follow in anyone else’s footsteps, because he has already left his own.

Finally, coming back to tomorrow’s “Rolex Grand Prix” again: When you won in 2013 and 2015, you were one of the first to go in the jump-off, so you had to wait for a number of riders to jump before you actually knew you had won. Do you hope that things won’t be as nerve-racking for you tomorrow?

Guerdat: I simply hope, I ride well. Everything else will take its course!