It is about time! 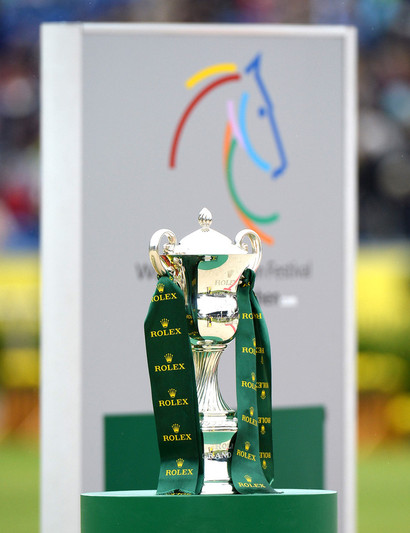 There are just a few hours to go before the first episode of the Rolex Grand Slam of Show Jumping this year! The jumping competitions of the CHIO Aachen 2016 begin tomorrow on Tuesday with a warm-up in the Main Stadium. From Wednesday to Friday, the athletes will have the chance to secure themselves a place in the grand finale on Sunday afternoon, the “Rolex Grand Prix, the Grand Prix of Aachen”, which is endowed with one million Euros in prize-money.

The three qualifying jumping competitions alone are a hard trial for both horse and rider: Starting with the “Turkish Airlines Prize of Europe,” the main competition on Wednesday, the path leads to the starting list of the “Rolex Grand Prix”, via the “Mercedes-Benz Nations’ Cup” on Thursday evening and the “Prize of North Rhine-Westphalia”, the main competition on Friday. Only those riders, who manage to convince with an excellent placing in at least one of these competitions, will win one of the coveted 40 tickets for the final.
All of the top riders in the world ranking list will be battling it out to secure themselves a Major victory: The host country, Germany, is sending its best riders to the CHIO Aachen: Christian Ahlmann (ranks 2nd), Daniel Deußer (ranks 8th), Marcus Ehning (ranks 12th), Ludger Beerbaum (ranks 13th) and Meredith Michaels-Beerbaum (ranks 21st). The same is true of the French show-jumpers, who have three of the world’s current top ten riders: Simon Delestre, the current number one in the world ranking list, Pénélope Leprévost (ranks 4th) and Kevin Staut (ranks 7th). Incidentally, thanks to winning the bronze medal at the European Championships 2015 in Aachen, Delestre has already pre-qualified for the Grand Prix. The same applies for Gregory Wathelet from Belgium (ranks 10th), the reigning Vice European Champion, as well as for the current number three in the world ranking list, McLain Ward, who already has a place in the “Rolex Grand Prix” after taking the victory at the Pan American Games 2015. Among others, Kent Farrington (ranks 5th) and Beezie Madden (ranks 11th) will also be representing the USA.

Steve Guerdat has even pre-qualified twice – namely for claiming Olympic gold in 2012 and for his victory in this year’s World Cup Final. Since the Swiss rider is travelling to the CHIO Aachen as the winner of the Major in Geneva, all eyes will be particularly focused on him during the show: If he also succeeds in notching up the victory in the Grand Prix of Aachen, he will have achieved the second step in the direction of the Rolex Grand Slam and would then have to complete just one more hurdle at the Spruce Meadows ‘Masters’ in Calgary to take the Grand-Slam title.

Scott Brash knows what this phenomenal victory feels like: The current number six in the world ranking list went down in sporting history last year as the first and hitherto only winner of the Rolex Grand Slam of Show Jumping. The British rider has also confirmed his participation at the CHIO Aachen and is also pre-qualified for the “Rolex Grand Prix” as winner of the Spruce Meadows ‘Masters’ in 2015.

Will Steve Guerdat be able to assert himself against the strong field of competitors? Or will we hail in a new Major winner after the Grand Prix of Aachen on Sunday afternoon? The Rolex Grand Slam of Show Jumping is looking forward to an exciting CHIO Aachen 2016!