Meet the Next Gen: Gilles Thomas 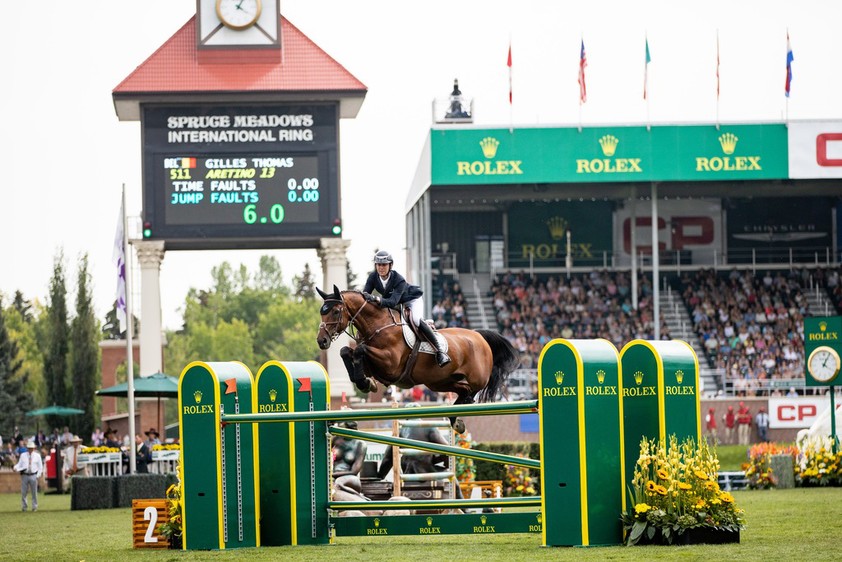 You have had a great year, what has been your highlight?

I have an such an amazing year – it is hard for me to pick just one highlight! I had my first 5* victory in the King George V Gold Cup at Hickstead in July which was amazing, and then coming third in the CP ‘International’, presented by Rolex at the CSIO Spruce Meadows ‘Masters’ Tournament was a fantastic result. Most recently being on the Belgium team and winning the FEI Jumping Nations Cup™ Final was incredible for me. I don’t think I can choose just one of those moments!

I am hoping to ride at CHI Geneva – that would be amazing. Then in Belgium we have the have a 5* show which includes a FEI Jumping World Cup™, in Mechelen, between Christmas and New Year’s Eve. This show is always very important to Belgian riders, and my family are involved in the organisation of it, so I really hope I can have a good result in the FEI Jumping World Cup™ there.

What are your hopes and ambitions for 2023 and beyond?

My ultimate dream is to compete at CHIO Aachen, in my opinion it is the best show in the world and the Rolex Grand Prix there is one of the most prestigious classes in the calendar. I am also aiming to compete in a Belgium senior team at a big championship. I have competed in Junior and Young Rider teams, but to be part of the Belgium team at the FEI World Championships or the Olympic Games and win a medal would be a dream come true.

After your great performance in the CP ‘International’, presented by Rolex at The Spruce Meadows ‘Masters’ Tournament, how will you prepare for CHI Geneva?

I’m not totally sure whether I will be competing there yet, but I hope that I will. They are two very different shows, but I would still take Aretino 13, as even though the arena at CHI Geneva is indoors, it is still very big. If I go to CHI Geneva, it will be the only indoor show that Aretino 13 competes in because he is a big horse and needs more space, so suits outdoor arenas better. CHI Geneva is such an amazing show and so I will plan to take my three best horses if I go.

I am very lucky at the moment because I have a stable filled with very high-quality horses, and that has enabled me to have such a successful season. I have around 12 horses in total and four of them can jump in a 5* Grand Prix. I also have some very talented seven and eight-year-olds that I have very high hopes for the future.

I have an eight-year-old stallion called Ermitage Kalone by Catoki. He has been breeding a lot this year and is very popular in Belgium, the Netherlands and Germany. He is a very good jumping horse and is well bred himself which is why I think he has been so popular.

Next year he will turn nine-years-old and so we will start to jump him more – he is currently jumping at 1.45m and in 2* Grands Prix and finding it very easy. My plan is that next year he will be my second horse for the 5* shows, and I will hopefully take him to a 3* FEI Nations Cup™ – we will build him up slowly throughout the year. I think that he will really start to be a top horse in 2024.

What keeps you motivated?

I love the feeling of winning and achieving top results, and this year has really given me that experience. It has been an amazing year, where I have been able to go to some of the best shows in the world, where the organisation is amazing and I am competing against my idols. Of course, there are a lot of shows in the calendar, and you have to go to most of them to keep your rankings points up, but I am very lucky that I have enough top horses to swap them out across the season to keep them fresh.

The Belgium team has been so successful this year, how does it feel to be riding on the same team as great riders such Wathelet, Philippaerts, Guéry, etc.

At the beginning of the year, I was third in a big class in Miami, and both Jérôme Guery and Gregory Wathelet messaged me to say they hoped that they we would compete on the same team this year, but I never thought it would happen.

My call-up to the Belgium team came sooner than I thought, and I was selected for the Nations Cup™ team in Falsterbo, where we won. I was then also selected for the FEI Jumping Nations Cup™ Final in Barcelona where I was on a team with Jérôme, Gregory and Olivier [Philippaerts], where we also won and gained Olympic qualification. Everything this year has happened so quickly, but it has been so incredible to be part of such a successful team. It has been amazing to compete on the same team as them as they are fantastic riders and have had such successful careers.

I think that it is so positive for the sport. The four Majors are at the best shows in the world, and they are so good at ensuring everything perfect for the horses – of course the prize money is incredible as well. There are so many 5* shows but the Majors really stand out to be as something to aim and prepare for, they are the top of the top. I think for riders, these Majors really motivate us, and we want to try and produce our best results there.

Which is your favourite Rolex Grand Slam of Show Jumping Major and why?

Even though I had such a great result at CSIO Spruce Meadows, I think I have to say CHIO Aachen. I live in Belgium, but Aachen is only around an hour drive from my yard. I have been and spectated there a few times and I think it is the best show in the world – I really hope I get to compete there one day.

My uncle, Marc van Dijck. He is also my trainer and has competed at the top level of the sport as well as representing the Belgium team. Around 10 or 15 years ago he was competing at CSIO Spruce Meadows and CHIO Aachen, and he was actually third in Aachen. He gives me the best advice, but I am also super motivated to make sure that I beat his results!

What is the best piece of advice that you have been given?

I am a very competitive person, so I think the best piece of advice I was given was that it is better to ride for second place and not for first place, and you will eventually win more. I really think this is true because you ride a bit slower, and it allows the time to build up their confidence and ability.

What is a typical day for you at home?

When I am at home, I ride around eight or nine horses. At the moment, my uncle manages my stables which enables me to focus solely on riding the horses, which is great for me. I try to ride all the horses in the morning. We have a lot of young horses as part of our breeding programme, and so in the afternoon I spend my time with the foals and free jumping the younger horses. It is very exciting to see the next generation of horses that we have at the stables.

What do you do in your free time outside of Show Jumping?

I do not have a lot of free time because most shows are on the weekends, but when I am free, I like to meet up with my friends and go for a drink or to a restaurant. I don’t see them that often – so I really appreciate the time I spend with them. I am also very sporty, so play squash once a week with a friend.

If you were stranded on a desert island, which three items would you take with you?

Definitely my pillow – I have to take this everywhere I go, otherwise I get neck pain. Then I think a pocketknife to help me survive, they are always useful. Finally, a speedboat, so that I can get home!