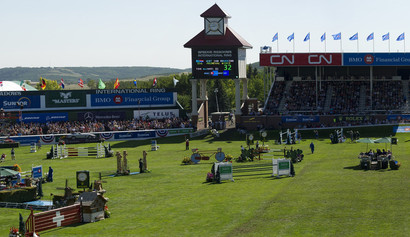 It was a splendid kick-off to the Rolex Grand Slam.  Forty thousand spectators celebrated Nick Skelton as the first winner, Skelton, of all people, this veteran of the sport, who has experienced so many highs and lows.  And where else could this new chapter in the history of the jumping sport begin than at the CHIO Aachen?  The heart of equestrian sports beats at these showgrounds steeped in tradition.  International competitions have taken place in Aachen since the early nineteen twenties, throughout the years always in a magnificent setting.

This quest for perfection based on a long history is shared by the organisers of the Spruce Meadows Masters.  In Canada from September 5th - 8th, the winner of the Grand Prix in Aachen will have the first chance to win a bonus in the Rolex Grand Slam.  If Nick Skelton also rides to victory here, he has the opportunity to win an additional one million Euros in prize- money in Geneva in December.   Located at the foot of the Canadian Rocky Mountains the long tradition of Spruce Meadows, an extraordinarily good infrastructure and enthusiastic spectators provide an exceptional atmosphere, which attracts the best riders in the world.  It is a magical place for equestrian sports and their fans, one where history can be written.  And every year one has the impression that the organisers have succeeded in further increasing the top quality of this event.  The Masters is always an extraordinary week.  The best horses in the world are found in the stables and tens of thousands of spectators are in the stands waiting to celebrate the horses and riders from 13 nations.  Christian Ahlmann, Hans-Dieter Dreher, Lars Nieberg and Daniel Deußer will be travelling to Spruce Meadows from Germany. Spruce Meadows and the Rolex Grand Slam are one of the highlights of the year for Deußer. “Together with Aachen, Spruce Meadows is one of the best and most traditional showgrounds in the world.  I am very much looking forward to the challenge of the Grand Prix (CN International presented by Rolex) on Sunday.”  Of course, his aim will be to win so that he can become part of the Rolex Grand Slam.

At the end of the week, that much is already certain, some of the riders will once again have become legends.  And everyone, both the fans and the athletes, will be eagerly awaiting the next Rolex Grand Slam event.  Next stop:  CHI Geneva, December 12-15th.