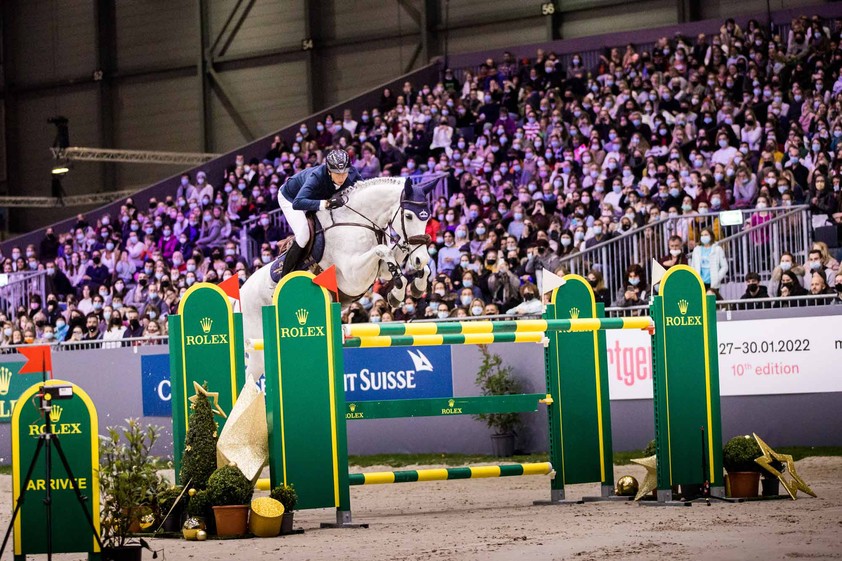 The Rolex Grand Slam of Show Jumping returns to CHI Geneva from 7 – 11 December 2022 with an action-packed schedule, including the 21st running of the Rolex IJRC Top 10 Final on Friday evening and pinnacle class, the Rolex Grand Prix on Sunday afternoon.

Held in the impressive Palexpo in Geneva, the world’s elite horse and rider combinations will tackle some of the toughest tracks of the year, at is what is often considered the sport’s leading indoor show jumping venue. Taking part in this year’s show is a spectacular line-up of athletes including 17 of the top 20 riders, as well as six Rolex Testimonees and 17 riders representing the home nation.

After his sensational win at in the CP ‘International’, Presented by Rolex at The CSIO Spruce Meadows ‘Masters’ Tournament, Germany’s Daniel Deusser will be looking to continue his impressive form in the Rolex Grand Slam of Show Jumping Majors, having won two of out the last three Grand Prix. Deusser will be aiming to continue his quest to become only the second person to have ever won The Rolex Grand Slam of Showjumping, following fellow Rolex Testimonee Scott Brash’s triumph in 2015. Deusser will also be joined by fellow countryman Gerrit Nieberg, winner of the Rolex Grand Prix held at CHIO Aachen earlier this year.

Home favourite and defending champion, Martin Fuchs, will be the one that everyone has their eyes upon. Having won the last two editions of the Rolex Grand Prix at CHI Geneva, the World No.2 understands the precision, bravery and athleticism required by horse and rider to be successful in this prestigious competition. Joining Fuchs is compatriot and three-time winner of the Rolex Grand Prix at this iconic venue, Steve Guerdat, as well as FEI World Championship teammates Edouard Schmitz and Pius Schwizer.

World No.1 Henrik von Eckermann adds to the impressive list of entries this year. The Swedish rider will come to the show brimming with confidence, having been World No.1 for the past four months and following a recent win in the FEI Jumping World CupTM Qualifier in Verona. The double world champion and team Olympic gold medalist will however be looking to claim his first victory in the Rolex Grand Prix in Geneva. Sweden will also be represented by Peder Fredricison. The ever-competitive Peder, who joined Henrik on the podium in Tokyo and Herning will also be aiming to lift the prestigious trophy for the first time.

Last year’s runner-up Harrie Smolders will be hoping to go one better this year to become the first Dutch winner of the class. A strong contingent of riders from France will also head to CHI Geneva this year, including World No.3, Julien Epaillard, the in-form Simon Delestre and Rolex Testimonee Kevin Staut. Staut, a former winner ofboth the Rolex IJRC Top 10 Final and the Rolex Grand Prix, will be looking to use his knowledge and experience of how to win in this venue to add the last Rolex Grand Prix of the year to his impressive results this year.

Great Britain will be represented by all members of their FEI World Championship bronze medal-winning team. Ben Maher won the Rolex IJRC Top 10 Final last year with his Olympic gold medal-winning partner, Explosion W, and has continued his impressive form throughout the year with new string of horses at the very top of the sport. Scott Brash, is never one to discount in this prestigious class, having won here in 2014 on his way to claiming the Rolex Grand Slam of Show Jumping in 2015. The Under-25 World No.1 Harry Charles will also be in attendance. Having broken into the Top 15 this year, the young British rider has cemented himself as one of the best riders in the world and will be joined by another up-and-coming young rider, Joseph Stockdale, who will be making his debut at CHI Geneva.

Belgium’s Gilles Thomas, who was third at in the CP ‘International’, presented by Rolex at The CSIO Spruce Meadows ‘Masters’ Tournament, will be joined by compatriots Gregory Wathelet, who won the Rolex Grand Prix at CHI Royal Windsor Horse Show earlier in the year, and FEI World Championship individual silver medalist, Jérôme Guery.

Other notable entries include Ireland’s Conor Swail, who has recently won both the FEI Jumping World CupTM Qualifiers in Washington and Sacramento, Max Kühner from Austria who was third in the Rolex Grand Prix at CHI Geneva last year and the USA’s McLain Ward.