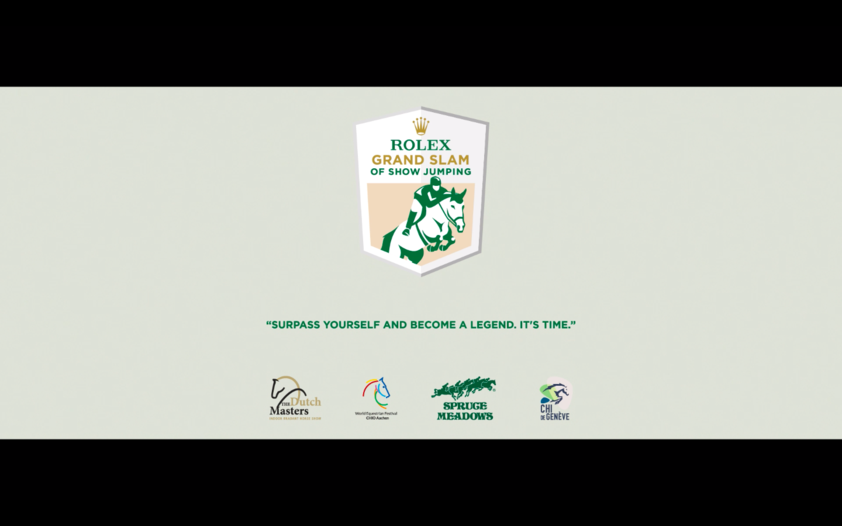 The pinnacle of international show jumping, the Rolex Grand Slam, released a ground-breaking new multi-channel media campaign in March 2018, which has demonstrated some phenomenal results since its inception

The multi-platform campaign, which uses the strapline ‘Surpass yourself and become a legend’, was first revealed in the form of a 60-second-long commercial and is designed to promote the dedication and passion required to win the revered Rolex Grand Slam of Show Jumping.

The Rolex Grand Slam of Show Jumping comprises the most highly regarded international show jumping events in the world, notably the four Majors, including The Dutch Masters, the CHIO Aachen, CSIO Spruce Meadows ‘Masters’ and CHI Geneva. The evocative and innovative film tells the story of a rider’s journey to achieve success, through emotive footage accompanied by a compelling narrative, relatable not only to the equestrian audience, but to anyone wanting to achieve greatness and striving to accomplish a lifetime goal.

A 30-second version of the film featured across the Rolex Grand Slam of Show Jumping’s social media channels conquering the digital world to report impressively high figures, including a reach of 12 million on Facebook. Not only was the reach high, the 30-second film generated over 3.5 million views on YouTube, outshining comparable equestrian-focused films.

The 30-second film also featured on international lifestyle online publications, including GQ, The New York Times, and Bloomberg, as part of a strategy to target a wider global audience. The strategic placements of the film achieved an enviable reach across lifestyle and economic media titles, educating new audiences on what the Rolex Grand Slam of Show Jumping is.

On the success of the campaign the new president of the Rolex Grand Slam of Show Jumping’s Steering Committee, Marcel Hunze, commented: “This campaign is the first step towards raising awareness of the Rolex Grand Slam of Show Jumping and growing audience reach globally. Like tennis and golf, show jumping has its own Grand Slam and we want to demonstrate to the broader sporting enthusiast the parallels these three Grand Slams share, with each creating an environment for athletes to strive for excellence and pursue their dreams of becoming a legend.”

The first Major of the year takes place at The Dutch Masters in 's-Hertogenbosch, The Netherlands, where the world’s best riders will compete for victory in the prestigious Rolex Grand Prix on Sunday 17 March 2019. Among the stellar line-up is the Rolex Grand Slam of Show Jumping live contender, Germany’s Marcus Ehning, who will be hoping to emulate his success at CHI Geneva in December 2018 and move one step closer to lifting show jumping’s most coveted trophy.