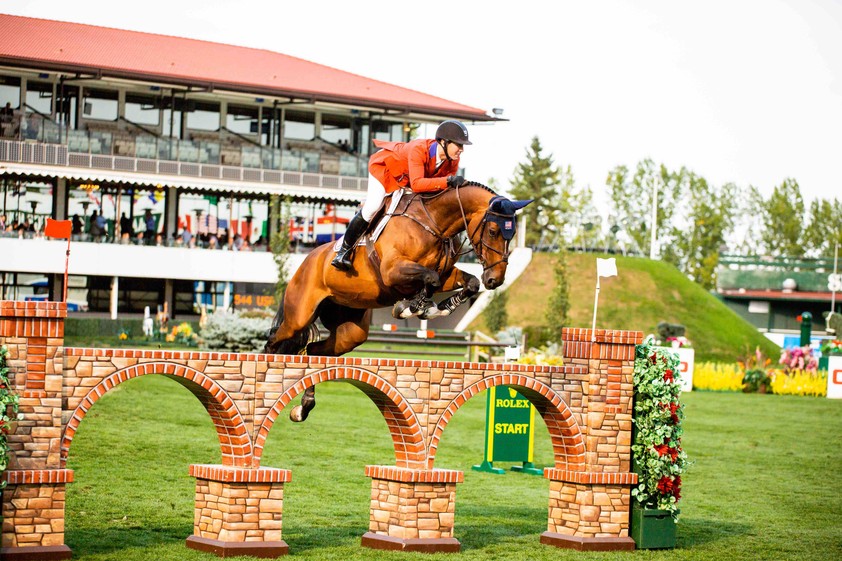 The Rolex Grand Slam of Show Jumping returns to the CSIO Spruce Meadows ‘Masters’ from 7-11 September 2022, with the CP ‘International’, presented by Rolex on the Sunday providing a thrilling finale to five days of outstanding sport. Located in the foothills of the Alberta Rocky Mountains in Calgary, the show will welcome the world’s best horse and rider combinations to what is often regarded to as the leading equestrian venue in North America.

Following his spectacular win at CHIO Aachen with Ben 431, Gerrit Nieberg comes to the CSIO Spruce Meadows ‘Masters’ as the Rolex Grand Slam of Show Jumping Live Contender. This will be the first time that the combination will make the journey across the Atlantic Ocean to this iconic venue, with the duo looking to carry forward their winning momentum from CHIO Aachen to continue their quest to become the next Rolex Grand Slam of Show Jumping victor.

Joining Nieberg are a host of world-class horse and rider combinations. Three of the Swedish FEI World Championship gold medal-winning team come to Calgary with their medal-winning horses. Jens Fredricson, Peder Fredricson and Henrik von Eckermann will all be aiming to claim their first victory in the CP ‘International’, presented by Rolex at the beautiful venue. von Eckermann and King Edward are sure to be the hot favourites heading into the third Rolex Grand Slam Major of the year, having won the Individual gold medal in Herning. Peder Fredricson is also expected to be at the top of the leaderboard, having won two Rolex Grands Prix in the last two months at Knokke Hippique and the Brussels Stephex Masters. These combinations will be riding full of confidence and will be looking to continue their top-form into the show.

Out of the six Rolex Testimonees competing at the CSIO Spruce Meadows ‘Masters’, current World No.2 Martin Fuchs will lead the way. The Swiss, who made history by winning consecutive Rolex Grands Prix at CHI Geneva in 2019 and 2021, will be hoping to claim the Rolex Grand Slam of Show Jumping bonus for winning two out of four Majors. Fuchs has had a phenomenal 2022 season thus far, winning the FEI World Cup™ Final and the Rolex Grand Prix at Jumping International de Dinard.

Compatriot, and last year’s winner of the CP ‘International’, presented by Rolex, Steve Guerdat returns to the impressive International Ring at the CSIO Spruce Meadows ‘Masters’ to defend his title. The ever-competitive Guerdat is the ultimate horseman and is always able to get the most out of his horses in the big moments. Knowing what it takes to win, he brings two of his top horses (Venard de Cerisy and Taina M&m), to this third Rolex Grand Slam of Show Jumping Major of the year. Joining Fuchs and Gerdat is the next young Swiss talent and their FEI World Championships teammate Edouard Schmitz. The young rider is now cementing himself as one of the most exciting young riders in the sport having recently won the International Grand Prix of Ireland at the Dublin Horse Show.

A regular at the Calgary venue, Kent Farrington and his team of horses will have the advantage of knowing the arena and most importantly the American knows how to win in it. In July, he added to that list of wins with Orafina in the Jayman BUILT Cup at the 'North American' CSI 5* tournament held at the venue. Last year, Farrington came second in the CP ‘International’, presented by Rolex, and will be hoping to go one better this year.

British rider, Scott Brash, is sure to have the fondest of memories from this venue, as it was where he won the Rolex Grand Slam of Show Jumping in 2015. Brash still stands as the only rider to have won this elusive title and is a two-time winner of the CP ‘International’, presented by Rolex. He will travel to Calgary brimming with confidence, following his strong performance in the Rolex Grand Prix at CHIO Aachen finishing a close second, as well as winning Team bronze in Herning.

The home crowd will be delighted to welcome a number of Canadian riders. Tiffany Foster, the best placed Canadian rider at the FEI World Championships, will be joined Erynn Ballard and Amy Millar. The last Canadian winner of this class came from Ian Millar and Dixson in 2014, so these talented riders will be looking to bring the coveted title back to home soil once more. The Canadians also have a trump card to play, with their new Chef d’Equipe Eric Lamaze on-site providing his expert coaching and knowledge having won the class in 2007.

The Netherlands will be represented by Harrie Smolders, who will be partnered by Darry Lou. The 14-year-old chestnut stallion was the former mount of American rider Beezie Madden, who in 2019 claimed the prestigious class. The passionate crowd will no doubt be wondering whether the Dutchman is able to repeat this success aboard this talented horse. Adding to Europe’s strong presence at the show is Max Kühner, who brings his trusted partner Elektric Blue P as well as the talented Eic Coriolis Des Isles. France’s Kevin Staut will also be making the journey the CSIO Spruce Meadows ‘Masters’. Staut, who has had numerous 5* Grands Prix wins over the last couple of years, is yet to be victorious in this class. The Frenchman’s fellow Rolex Testimonee Daniel Deusser, a previous winner of the Rolex Grand Prix at CHIO Aachen and The Dutch Masters, will also be in attendance.

Jérôme Guery will head the strong Belgium contingent in Canada. Guery notably, who won the Individual silver medal at the FEI World Championships, will be joined by no less than four members of the Philippaerts family. Ludo Philippaerts will be joined by three of his sons, including Olivier, winner of the CP ‘International’, presented by Rolex 10 years ago, Nicola who brings the talented mare Katanga V/H Dingeshof, with whom he finished third in the Rolex Grand Prix at CHIO Aachen earlier in the season and Thibault who recently won Individual silver and Team gold-medals at the FEI Young Rider Championships.

Course designer Leopoldo Palacios will be looking to set a challenge that is fair yet challenging for the horses and riders competing in the CP ‘International’, presented by Rolex. With the continued quest for the next victor of the Rolex Grand Slam of Show Jumping continuing at the historic venue, the field of competitors look as talented as ever and each rider will be putting their all into lifting the iconic trophy on the final day.