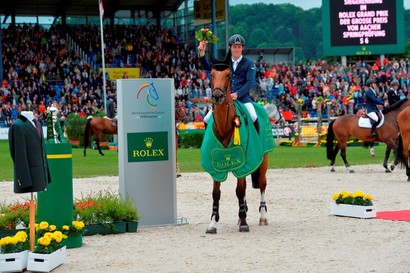 For Scott Brash the dream of claiming the victory in the Rolex Grand Slam is almost within reach. His personal Rolex Grand Slam started at the CHI Geneva in 2014, where the British rider, who is in the meanwhile number one in the world rankings, finished first with his top horse "Hello Sanctos" after jumping double clear. During the Rolex Grand Prix in Aachen a few weeks ago, the exceptional show-jumper had a déjà-vu experience in front of 40,000 spectators: Three clear rounds and the fastest time in the jump-off after reaching the finish line in 48.04 seconds – these were the ingredients for the phenomenal victory in a nail-biting final. He had also placed his bets on the right horse in Aachen, namely on "Hello Sanctos". In September, he will have the opportunity as the first show-jumper ever to claim a triple victory in the Spruce Meadows "Masters" in Calgary. If the 29-year-old succeeds in winning the Grand Prix there again, he will become an equestrian sport legend. Because nobody else has ever achieved this feat before. He would also pick up a huge bonus. Because whoever wins all three Major shows - in Aachen, in Spruce Meadows, and in Geneva - in succession, has the chance to win one million Euros on top of the prize-money.

Brash has already competed in Calgary once before. And he is looking forward to returning: "I like the showgrounds, even though they do differ from Aachen. Aachen excels with its fantastic atmosphere and huge stadium. In Calgary the atmosphere is also unique, but the stadium is of course totally different." He already rode "Hello Sanctos" at his Calgary premiere and he felt quite at home there, which is actually a good omen. Nevertheless, Brash is facing the last obstacle with a down to earth attitude and with "understatement". "It is going to be everything but easy, taking the victory for the third time in succession. Many other very good riders have to tried to pull off this feat before me. It was already very difficult winning two shows consecutively and three in a row…that will be very, very difficult," was his realistic assessment. Especially since the British rider is aware, that he will face very strong competition: "Around 50 participants will try to win the Grand Prix. The riders from the USA and Canada have a small home advantage perhaps, because they already competed there in the summer. So they will be tough to beat, but then so will the Europeans."

The system of the Rolex Grand Slam is simple: The rider has to participate in all 3 Majors within the same cycle.  If he wins the three shows, he picks up a bonus of 1 million Euros on top of the prize-money. In case of two consecutive wins out of three, he is granted a  bonus of 500,000 Euros. If the two victories are non-consecutive the bonus totals 250,000 Euros. The rider can choose the horse he wishes to compete with. It is therefore possible to win the bonus riding different horses. This system is infinite, in other words it is not dependent on the calendar year. It is thus an endless story.