Steve Guerdat places high demands on himself, which he will strive to satisfy with his mare Nasa in Calgary. 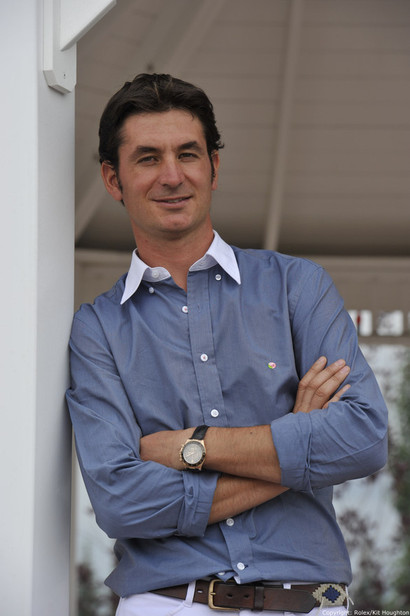 Of course, he always wants to win, said Steve Guerdat. His ambition and his success-oriented way of thinking are what allow him to achieve his aims. Even if he is aware that constant success is simply not possible. Because not everything runs as perfectly as in the summer of 2012. Steve Guerdat rode to victory with Nino des Buissonnets in London and claimed the Olympic gold medal. However, the Swiss show-jumper, who is in the meantime 32 years old, hasn‘t let this go to his head. „There is still room for some improvement,“ he revealed, „because I ride at approx. 50 shows a year and I certainly don‘t win every time.“
In the interplay between the rider and horse, every detail has to be right to lead to success. „It is a balancing act,“ said Guerdat, especially where Nino des Buissonnets is concerned. The 13-year-old French gelding owned by the financier from Zurich, Urs E. Schwarzenbach, walks a fine line between genius and insanity, raved Guerdat. His impressive talent, enormous jumping ability and carefulness are what make Nino des Buissonnets one of the best jumping horses in the world. However, these attributes also shape the horses own will, which got the upper hand again at the CHIO Aachen in July. Nino des Buissonnets refused the first jump of the double combination in the second round of the Rolex Grand Prix.
„Things didn‘t go as planned,“ said Guerdat laconically. He has learnt to cope with the difficult character of his horse, in the same way that he has learnt to curb his own impulsive character. Ambition and the hunger for success are to inspire him, not to tear him apart, which is why his trainer, Thomas Fuchs, always keeps telling him to relax a bit. This doesn‘t fall on deaf ears, „I was possibly too focused and thought about things too much,“ admits Guerdat. Especially since it is a well-known fact that success and defeat lie very close together in the world of sport – something which is also true for Steve Guerdat and Nino des Buissonnets. After the CHIO Aachen they went on to win the Grand Prix at the CSI**** in Munster.
The Swiss rider will compete at the WEG with Nino des Buissonnets and will ride Nasa, his current top horse, at the Spruce Meadows Masters, the next Major show, which takes place just after the World Championships. „She feels at home in Spruce Meadows,“ said Guerdat about the 13-year-old grey mare, which is also owned by Urs E. Schwarzenbach, whose stables are located above Herrliberg near Zurich, where Guerdat has been living for the past seven years. In 2013, he came second with Nasa in the Grand Prix in Canada, pipped at the post by the Belgian rider Pieter Devos, after picking up one time fault.
Should the pair manage to jump clear in all rounds and reach the finish line first, Steve Guerdat will be doubly rewarded on September 14th. On the one hand with a lion‘s share of the prize-money totalling 1.5 million dollars as well as collecting a bonus of 250,000 Euros. Because he won the Rolex Grand Prix at his home show in Geneva last December, which makes up the third leg of the Rolex Grand Slam of Show Jumping, after Aachen and Calgary. As such, Guerdat qualifies for the bonus programme, according to which prize-money to the value of one million Euros will be paid to the rider, who manages to win all three Grand Prix in succession within twelve months. In addition to this, should two GP be won in a row, a bonus of 500,000 Euros will be paid out, and for the „two out of three“ mode, which is possible in Guerdat‘s case, the bonus would be 250,000 Euros.
And yet neither the lucrative amounts of money, nor the fact that Guerdat could become the first rider to win a bonus in the Rolex Grand Slam, play a major role for the rider. „It is a traditional show that is held in high esteem, the best riders have already won here,“ was Guerdat‘s initial comment when questioned about the CSIO in Calgary. Guerdat namely didn‘t become a show-jumper because of the high prize-money. It was his fascination for horses that led to him becoming a professional rider.
In this way, Guerdat followed in his father‘s footsteps. Philippe Guerdat, who is now Chef d‘Equipe of the French team, was also a successful show-jumper. And Steve‘s grandfather, Serge Guerdat, who lived in Bassecourt in the Swiss Canton Jura, was a well-known horse dealer. However, his grandson Steve never really enjoyed the horse trade, which is why during the early years of his career he left Jan Tops‘ stables.
Because as soon as Guerdat was successful with a horse, it was sold. „I knew very early on that my aim was to achieve everything possible in my sporting career and not to win as much money as possible,“ said Guerdat.  Steve Guerdat has already celebrated many great victories: Olympic gold, team gold at the European Championships, number one in the world rankings, numerous significant Grand Prix victories. Whether the 32-year-old show-jumper can possibly have any further goals? „Yes, I try to jump every course clear,“ said Guerdat. His aim is to achieve absolute harmony with his partner, the horse. Hence, Steve Guerdat is the perfectionist among the show-jumpers.