Superlatives at the CHI Geneva 2014 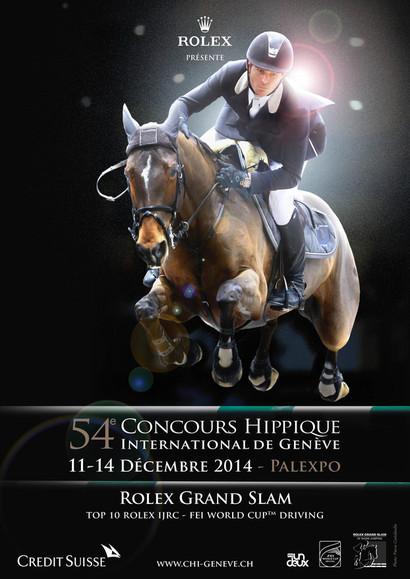 The Concours Hippique International de Genève (CHI Geneva) is offering an exciting show with high-end classes, outstanding competitors, and for the very first time, an Indoor cross country course to the public at Palexpo from December 11th to December 14th. Equestrian sports will never have been under such a strong spotlight in Geneva!

The very best riders will be reunited on the worldʼs biggest arena over four days, from 11th to 14th December, to compete in high-class competitions. And all the world champions have answered favourably to the invitation; the Swiss Steve Guerdat, Olympic champion, the recent team World champions, the Dutch riders Gerco Schröder, Maïkel van der Vleuten and Jur Vrieling, the European champion, the Frenchman Roger-Yves Bost, the individual World vice-champion 2014 Patrice Delaveau, as well as the current number one, Scott Brash and Daniel Deusser, winner of the World Cup and the IJRC Top 10 Rolex Final. The same final that will again be taking place in Geneva on Friday evening. The ten best riders on the planet will compete a two-phase class. Germany with Daniel Deusser, Ludger Beerbaum and Marcus Ehning, as well as France with Patrice Delaveau, Kevin Staut and Pénélope Leprévost, will be the nations the best represented. The American, Kent Farrignton who is very comfortable in Geneva, as well as Steve Guerdat, Scott Brash and Maïkel van der Vleuten will try and play mediator.

The Grand Slam as main target
The Rolex Grand Prix, taking place on Sunday afternoon, will of course be the highlight of
this yearly equestrian rendezvous in Geneva. Being part of the Rolex Grand Slam of Show Jumping with Aachen and Calgary, Geneva and its Rolex Grand Prix have grown to a new dimension. The German rider, Christian Ahlmann, winner in Aachen last July, has well understood this. Victory in Geneva will allow him to pocket CHF 300ʼ000, awarded to the winner of the Grand Prix, as well as the substantial amount of EUROS 250ʼ000, which he could touch as the bonus for winning two sequential Grand Prixʼs.

Tailor made shows
Last but not least, various shows will punctuate the sportier side of the programme in Geneva. To ensure the spectacle, the Basel Top Secret Drums Corps, with their 20 crazy drums will provide a stunning show. In a more equestrian register, twelve riders from the Maison du Roy, dressed in Louis XV period costumes will ride accompanied by ten hunting horns. Six traditional carriages, drawn by horses from the Swiss National Stud Farm and two riders from Garde Républicaine française will also feature in the show.