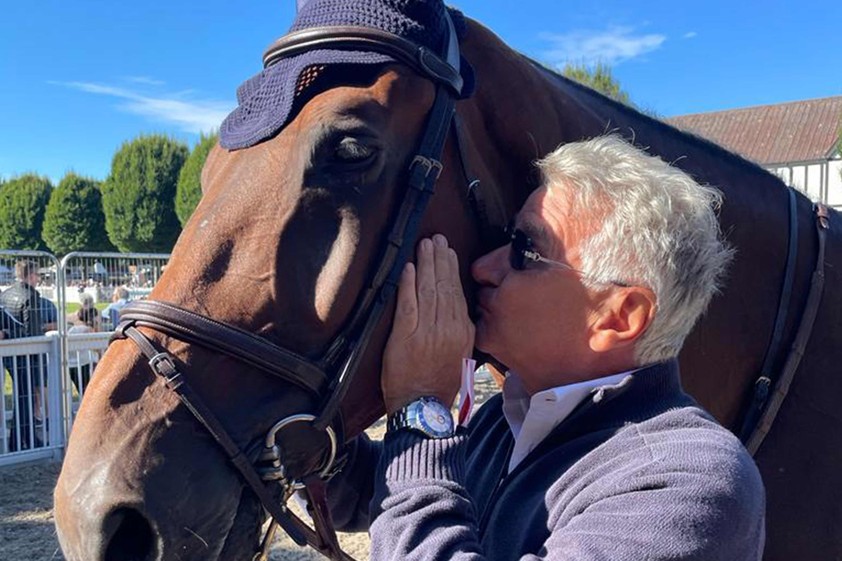 I am Swiss-Italian, so I can link my first equestrian memories to when I was living in the Italian part of Switzerland, near Lugano. One memory I have is of some great show jumpers, including Graziano Mancinelli, Piero D'Inzeo and Raimondo D'Inzeo, not because I was fond of horses, but because when watching Italian television at that time, they were such big champions. These are the three champions that still come to my mind, and the first ones that introduced me to the equestrian world.

How did you become a top level owner in the sport?

First and foremost, I don’t come from a family in which I was brought up with horses, so I became a show jumping horse owner a little bit by chance. When my daughter decided to take up horse riding for her enjoyment, I bought her a six-year-old in Ireland called Castlefield Eclipse, which was my first top level horse. It is thanks to Eclipse that I discovered my interest and passion for show jumping. I also discovered that I enjoy being surrounded by the very best riders and that I strive to achieve great results. Eclipse competed at the Olympics in London in 2012, then won in St. Gallen, and then received a bronze medal with the Swiss team at the European Championships in Aachen in 2015. So, I became an owner at first by chance but then my love for being an owner was fuelled by the results that my first horse Eclipse achieved.

As an owner, what is the proudest moment of your career so far?

The first memory that comes to mind is Edouard [Schmitz] and Gamin [Van’t Naastveldhof] winning in Dublin – that was something very special but also unexpected. It could be compared to a tennis player winning Wimbledon due to the tradition and the thrilling atmosphere of the show, which makes the competition so unique. Of course, there are other favourite moments, for example, when Eclipse made six clear rounds in the Nations Cup of Rome, Rotterdam and Aachenn. These are very different memories but are still very important to me.

What qualities are you looking for when purchasing a 5* (or a potential 5*) show jumping horse?

I purchase horses that are quite young, usually six- and seven-year-olds. When you purchase those types of horses, there is potential in their legs, for them to jump at the biggest competitions, but this is not everything, this is only one aspect of what one looks for when buying a horse. Physiology, mentality, and agility are also very important when selecting horses. In my opinion, it is very important to train horses thoroughly; one has to be attentive from when they are young, to ensure that things are not done too quickly, to take the time, and to be patient with them. It’s very important to train the horses well for them to be successful at a high level where there is pressure and stress. As I joined this profession quite late, I had to observe other people and gain experience through learning and buying. I was looking at horses that could have the mentality to be able to continuously perform, and to remain at the top. At this high level, you only have three or four percent of the horses that can remain at the highest level and win competitions.

How much involvement does a rider have when you look to buy a new horse?

When we buy new horses, I always want Edouard to give his advice, which is important, as at the end of the day, he is the one who is going to ride the horse. I like to not only receive advice from the rider but from other people when buying horses, as it allows me to make an informative decision.

Tell us a bit about your relationship with Edouard Schmitz?

I have known Edouard since he was young, and everyone recognised that he was a very talented rider.  When I was making decisions on who I wanted to lend my horses to, Edouard came to mind. After discussing with my daughter, we both came to the conclusion that he would be a good choice, as we believed we would be giving a rider the possibility to succeed in the sport. Edouard has always had a very supporting family and it has been such a pleasure to have him as a rider. Our relationship is based on seriousness and humour, and contains a certain lightness, which allows us to not feel too pressured, which is hard in this world. I am not the type of person that would cause stress or pressure, as I believe this can lead to issues, so it’s important for me to have a good relationship with whoever is riding my horses. So, for this reason, I let Edouard decide how to train, and how to handle the horses, as this is not my area of expertise.

How many horses do you currently own, and which is your stand-out horse? Edouard has referred to Gamin Van’t Naastveldhof as ‘the real deal’;

I have two horses with Edouard, a seven-year-old called Karel [Doorman], who has the potential to succeed at a very high level, and an 11-year-old called Babylone Des Erables, who is good but may not have the capability to achieve Karel’s level. Then I have Gamin, who I bought when he was six-years-old – he is my best horse. He is a horse that every rider would love to have, as he has all the qualities that one looks for: power, agility, a fantastic gallop, and he has the mentality.

Which of your young horses do you believe has the potential to be the most successful?

Karel is a horse we hope will succeed at a high level – he is a very quick and careful horse with a great mentality. But as he is only seven, he cannot yet compete in 5* competitions, so this is the only problem that we have with him at the moment. A solution is for us to enter him into some smaller classes, which is a good way to train him and build him up. In a way, Karel has similar qualities to the ones that Gamin had at this age, but he doesn’t have the same body, as Gamin has always been a big horse. Despite this, there is a very good chance that we will succeed, and be able to jump Karel at a high level, but it may be too early to say for sure.

Why do you do it? What is your ambition in being an owner?

My only ambition is passion. I mean, I don't have any special interest at all in horses. In the last 15 years, I have maybe sold only two horses, not because I wanted to do it, but for other reasons. I am really proud that along with Edouard’s family, we have helped him achieve so much, certainly during this last year. This is thanks to his skills and his personal qualities, but also due to the horses that he has.

The Rolex Grand Slam of Show Jumping is absolutely essential at this level and for the sport. A competition that is supported by Rolex is naturally prestigious, so all the riders dream of competing in competitions like CHI Geneva and the other three Majors at some point in their career. Competitions like the Rolex Grand Slam motivate and inspire young people to start riding and to discover the sport, which in my opinion is very important.