The Rolex Grand Slam in Numbers 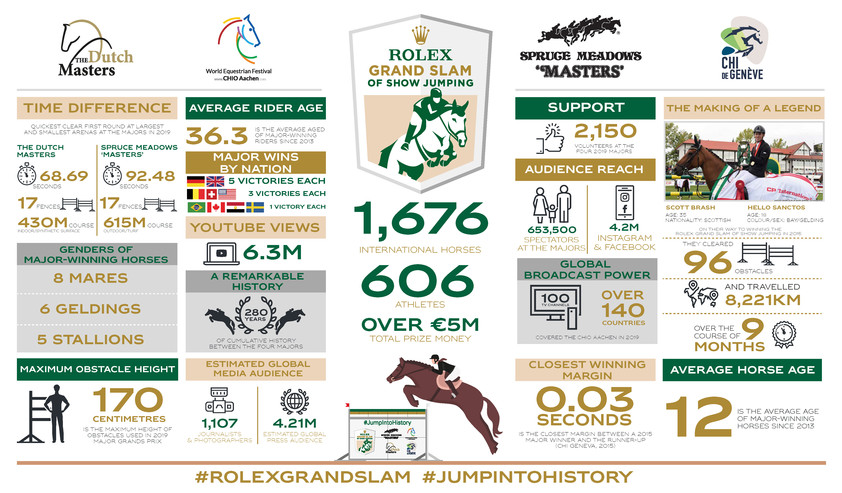 The Rolex Grand Slam of Show Jumping was launched in April 2013 and is today regarded as one of the most revered prizes in equestrian sport. The concept was created by the organising committees of three of the world’s biggest and most well respected shows – CHIO Aachen, Germany; CSIO Spruce Meadows ‘Masters’, Canada; and CHI Geneva, Switzerland – and rewards the rider who consecutively wins the Grands Prix at these three shows with a €1M bonus. In March 2018, these three global events, which are also known as ‘Majors’, were joined by a prestigious fourth – the largest indoor show in the Netherlands: The Dutch Masters.

The first and only winner of the Rolex Grand Slam of Show Jumping is Scott Brash MBE, who achieved this pursuit of excellence in 2015 aboard his bay gelding, Hello Sanctos. Having already triumphed in the Rolex Grands Prix at the CHI Geneva 2014 and the CHIO Aachen 2015, the British rider then went double clear in the ‘CP International’, presented by Rolex at the CSIO Spruce Meadows ‘Masters’ in 2015, and in doing so reached the pinnacle of the sport.

In a relatively short period of time, the Rolex Grand Slam of Show Jumping has grown exponentially – as portrayed by many of the impressive figures in the infographic – and has established itself as the sport’s ultimate challenge, attracting the very best horse and rider combinations on the equestrian world stage. While tennis has its four Grand Slam tournaments (Australian Open; French Open; The Championships, Wimbledon; and US Open) and golf has four Major championships (Masters Tournament; The Open; U.S. Open; and PGA Championship), the sport of showjumping is proud to have its very own Grand Slam. What makes the Rolex Grand Slam stand‐out from its tennis and golf counterparts is that women and men compete against one another on the same level for the same prize.

Since its inception, the Rolex Grand Slam of Show Jumping has welcomed over 653,500 spectators yearly to its four Majors; crowned Major champions from nine different nations; while everything has been made possible by the unwavering support of more than 2,150 loyal volunteers. To learn more about the magnificent facts and figures that make up the Rolex Grand Slam of Show Jumping, please see the attached infographic, which we encourage you to post on your website and share across your social media channels.