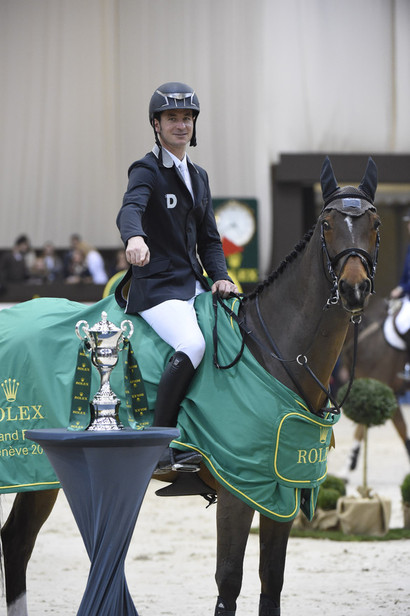 It was his day, his crowd, his big victory! The Swiss national hero, Steve Guerdat, won the “Rolex Grand Prix” at the CHI Geneva. At the third and last Major of the year in the Rolex Grand Slam of Show Jumping at the Palexpo, the reigning Olympic gold medallist relegated Simon Delestre from France and the Canadian show-jumper Eric Lamaze into second and third place respectively.
Up against 16 world-class pairs in the jump-off, Steve Guerdat entered the ring with his top horse “Nino des Buissonnets” as the ninth to go. The Geneva crowd greeted him with a frenetic cheer, as if he had already won. After completing the course at breath-taking speed and jumping clear over the final obstacle, absolutely nothing could keep the spectators in their seats: They celebrated their hero, who after winning in 2010 and 2013, was able to notch up his third Major victory in Geneva. “I am delighted about this victory, my horse Nino is simply superb, the crowd really helped me and of course a bit of luck always has to be on your side,“ said an overjoyed Steve Guerdat after the prize-giving ceremony. “The Major in Geneva is one of the most important competitions for me, it has the same standing as a Championship in my eyes.”
After this victory, the Rolex Grand Slam of Show Jumping has begun again for Steve Guerdat – he will once again be taking on the ultimate equestrian sport challenge. “The Majors in Geneva, Aachen and Spruce Meadows are classics on the equestrian sport circuit, which every rider strives to win. The additional opportunity of winning the Rolex Grand Slam provides extra motivation.”
Which is why the motto for the outstanding Swiss rider now is: Full speed ahead towards Aachen! Because Steve Guerdat will have the chance of clinching his second Major victory in succession there in July 2016.