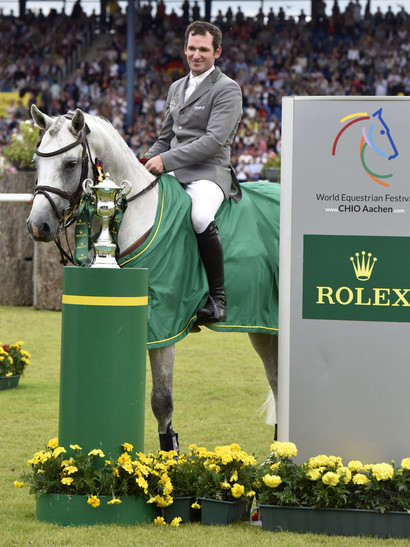 Six days of show jumping in a class of its own, hundreds of thousands of euphoric visitors, a nail-biting final: The opening Major of the year in the Rolex Grand Slam of Show Jumping at the CHIO Aachen 2016 couldn’t have been better. Especially not for Philipp Weishaupt, who rode to victory in the “Rolex Grand Prix, the Grand Prix of Aachen” and thus celebrated the first Major triumph in his career.

The German rider left the entire present-day equestrian sport elite trailing behind him with “LB Convall” and relegated the Rolex Grand Slam winner of 2015, Scott Brash from Great Britain, and the Spanish top rider, Sergio Alvarez Moya, into second and third place, respectively, against the amazing backdrop of the sold-out Main Stadium. As winner of the Major in Aachen, Philipp Weishaupt now joins the ranks of those sport icons, who have written history at the most famous showground in the world: Nick Skelton, Christian Ahlmann and of course Scott Brash – to mention just the most recent entries on the legendary winners’ board of the “Rolex Grand Prix” of Aachen. Now, a further unforgettable name has been added to the list.

“I can’t really believe it at the moment,” commented a more than overwhelmed Philipp Weishaupt during the prize-giving ceremony. “When I walked the course, it was clear to me that it was going to be very, very difficult today. But then, everything simply went so well, it was simply a perfect day.” And precisely this day is perhaps the beginning of a chapter that could soon become the most important one in his career. Because today, on Sunday, July 17th, 2016 – three days before his 31st birthday – the Rolex Grand Slam of Show Jumping has begun for Philipp Weishaupt, the challenge for the most prestigious and most demanding trophy on the international equestrian sport circuit. The objective is to win the three Majors – the CHIO Aachen, the CSIO Spruce Meadows ‘Masters’ and the CHI Geneva – in direct succession. A bonus of one million Euros and an eternal place in the sport’s Hall of Fame awaits the rider, who succeeds in achieving this exceptional feat.

So, for Philipp Weishaupt, the next stop is going to be Calgary – at the Spruce Meadows ‘Masters’ from September 7th- 11th, 2016.