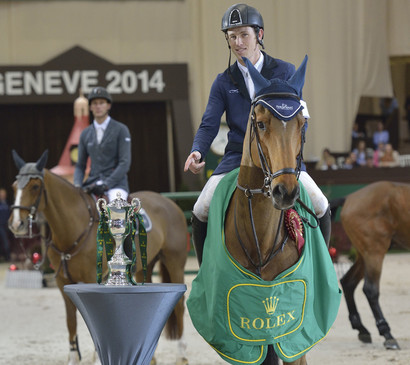 Scott Brash: Winner of the Rolex Grand Prix in Geneva 2014.

Scott Brash's personal Rolex Grand Slam of Show Jumping has begun. The British show-jumper rode Hello Sanctos to victory in the Rolex Grand Prix on Sunday afternoon at the third Major Show of the year, the CHI Geneva. The current number one in the world ranking list triumphed over twelve of the best riders in the world in the jump-off. He will now take on the ultimate challenge on the international equestrian sport circuit: The Rolex Grand Slam of Show Jumping.

"It is fantastic now also being a part of the Rolex Grand Slam. I am extremely looking forward to the next leg in Aachen," commented Brash. He is particularly grateful to Rolex: "It is unbelievable what Rolex has been doing for our sport for such a long time." At the World Equestrian Festival on the last weekend in May, Scott Brash will attempt to become the first rider in history to win two Major Shows in succession – and be the first rider to claim a bonus in the Rolex Grand Slam of Show Jumping.

After riding to victory in the Rolex Grand Prix at the CHIO Aachen in the summer, Christian Ahlmann from Germany also did his very best to win the Rolex Grand Slam of Show Jumping. After picking up four faults in the first round of the "CP International presented by Rolex" at the Major Show in Canada, the Spruce Meadows "Masters" exactly three months ago today, he jumped clear in the first round in Geneva and thus qualified for the jump-off. However, after knocking the penultimate obstacle, he ultimately finished eleventh in the competition.

The Major tournaments Aachen, Spruce Meadows and Geneva – all prestigious names on the international equestrian sport circuit, which are now connected by a spectacular bonus system: Turning the Rolex Grand Slam into a truly infinite story, into one of the most exciting concepts in the history of international sport.