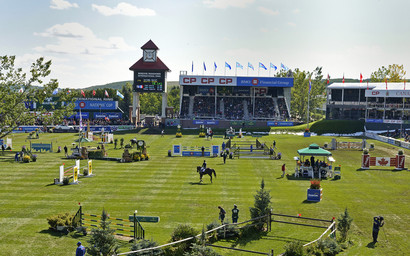 Sunday, April 13th, 1975, Spruce Meadows, lying just outside the gates of the metropolis Calgary, at the foot of the Canadian Rocky Mountains. A date, a venue, an event that was to write sporting history. Because the equestrian centre, which the Southern family was to officially open on this day, has long since become one of the most famous sporting venues in the world. Spruce Meadows is family-run up until this very day, still following the principle of the original quest to create a unique atmosphere of friendship, trade and top sport.

The figures speak an impressive language: Riders from 57 nations have already competed at the site, which, spanning 553 acres, offers sufficient space to house over 300 football pitches. 14 riding areas, two halls and stables for 1,000 horses – gigantic dimensions that can only be grasped by those, who have actually visited the location in person. Half a million visitors annually can confirm this. So too can the world elite of the show jumping sport, who contest the Grand Prix in the “International Ring” during the prestigious ‘Masters’ – the second leg of the year in the Rolex Grand Slam of Show Jumping. Now, in Spruce Meadow’s 40th anniversary year, precisely here in this legendary arena, a further milestone in the history of the equestrian sport could be set. Namely by Scott Brash. The Olympic gold medallist is the first rider ever to succeed in winning two consecutive Majors in the Rolex Grand Slam. Starting with the CHI Geneva in December 2014, where Brash and his exceptional horse “Hello Sanctos” rode to victory in the Rolex Grand Prix, the pair left their fellow competitors trailing behind them this May at the World Equestrian Festival as well. Now that the Brit has won first place in the “Rolex Grand Prix, the Grand Prix of Aachen”, competing at Spruce Meadows will allow him to unlock the impressive sum of 500,000 Euros – the reward for two Major victories in succession.

If Brash succeeds in winning the Spruce Meadows ‘Masters’, he could double this bonus. However, it is not just the one million Euros that are attracting the 29-year-old to the top show in Canada: The ascent to the Olympus of the equestrian sport is what lures him. To achieve what no other rider has managed to achieve ever before! Winning the three most demanding and most famous Grand Prix in the world directly in a row.  Geneva, Aachen and now the Spruce Meadows ‘Masters’. Making the Rolex Grand Slam perfect. And becoming a legend in the process!

However, two lists underline the fact that it is not going to be an easy task. As every year, the top international riders will be on the entry list. Not to forget the list of previous winners: Rodrigo Pessoa, Ludger Beerbaum, Jos Lansink, Nick Skelton, Jeroen Dubbeldam, John Whitaker – the list is full of the names of world champions, Olympic gold medallists and equestrian sport idols. The two Canadian national heroes, Eric Lamaze and Ian Millar, have already succeeded  in adding their names to the list. Millar even managed this feat twice with the sensational horse “Big Ben”, last year the ten-time Olympic Games participant claimed the victory in the “CP ‘International’ presented by Rolex” with “Dixson”. Now it is down to Scott Brash to follow in the tracks of Millar. Ride into the “International Ring” and win. Face the ultimate challenge. The whole world will have their eyes cast on him. Will he manage to pull off this sensational feat? Will he win the Rolex Grand Slam of Show Jumping? Sunday, 13 September 2015. A date, a venue, an event that could write sporting history.