The best riders in the world at the Rolex Grand Prix 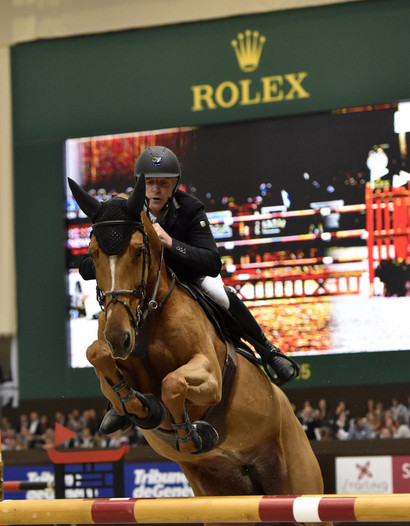 The opening prelude is over, now it is time to continue writing history! The venue: Palexpo, the biggest indoor arena in the world. The protagonists: The top show jumping stars. The event: The Rolex Grand Slam of Show Jumping, the biggest challenge in the history of the equestrian sport.
40 riders have secured themselves a place in the “Rolex Grand Prix”, the Final at the CHI Geneva and every single one of them will give it their best shot to come out on top at the end of the day. Because it is not just about winning the Grand Prix, there is much more at stake: Whoever leaves the ring as the winner of this competition has mastered the first step on the way to the Rolex Grand Slam of Show Jumping.
In total, there were four qualifiers for the “Rolex Grand Prix”. Roger-Yves Bost from France won two of them, Kent Farrington from the USA and the Swiss rider, Janika Sprunger, won one apiece. Their fellow competitors, who are also in the running to take the victory in the Major? The reigning double World and European Champion, Jeroen Dubbeldam from the Netherlands; the Olympic gold medallist, Steve Guerdat from Switzerland; the Swiss rider, Eric Lamaze from Canada and Ludger Beerbaum from Germany; the Vice-European Champion, Gregory Wathelet from Belgium; the Irish shooting star, Bertram Allen and of course the Rolex Grand Slam winner Scott Brash, who is hoping to defend his title. The starting list reads like a chronicle of successful names from the top sport. 40 big names on paper, all of whom want to write history on Sunday by winning the “Rolex Grand Prix”.