Weishaupt and Guerdat get off to a good start 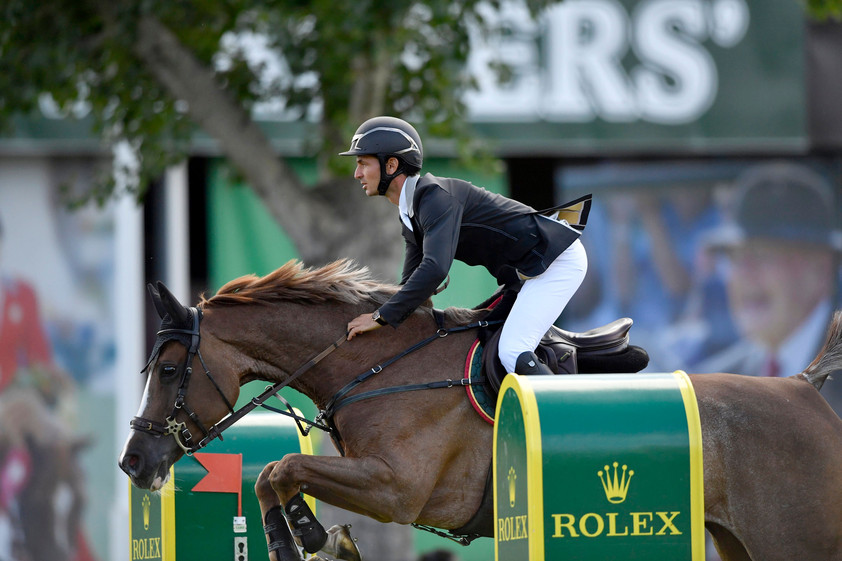 The picture shows Steve Guerdat and "Albführen's Happiness", winners of the first qualifier for the "CP 'International', presented by Rolex". It can be used free of charge (picture: Rolex Grand Slam of Show Jumping/Kit Houghton).

The international classes of the Spruce Meadows ‘Masters’ in Calgary, Canada have been underway since Wednesday. The two Rolex Grand Slam contenders, Philipp Weishaupt and Steve Guerdat, can be more than satisfied with their initial performances at the Major: Guerdat won the first qualifier for the “CP ‘International’ presented by Rolex” with the mare “Albführen’s Happiness” straight off. So, the Swiss rider has already qualified for the Final on Sunday. “Naturally, it is great to get a show off to such a good start,” said Guerdat delighted, however he also explained: “Of course, there is a huge difference between this first qualifier over 1.50 metre obstacles and the Grand Prix on Sunday, when a completely different level of performance is demanded.” Incidentally, Guerdat is placing his bets on “Corbinian” for the “CP ‘International’ presented by Rolex”, whom he won the World Cup Final with in the spring and with whom he successfully competed at the CHIO Aachen in July.

As in Aachen, Philipp Weishaupt will be saddling his horse “LB Convall” for the Major final. The stallion, who already competed in the Summer Series in Spruce Meadows, has presented himself in top form from the very first day onwards after returning to Calgary: “He is fresh, he felt at home here again straightaway, he greeted the parade horses of the Royal Canadian Mounted Police as if they were old friends. He also felt great jumping too.”

Since the pair are pre-qualified for the final after winning the CHIO Aachen, they can take a relaxed approach to the remaining days of the show. “’’Convall’ had the day off on Thursday, I am riding him in an advanced jumping class on Friday, Saturday I will rest him again – and on Sunday we will be going for it,” commented a confident Philipp Weishaupt, who, if he succeeds in riding to victory in the “CP ‘International’, presented by Rolex” on Sunday, will have the opportunity to perfect his second step in the direction of the Rolex Grand Slam.