Will Scott Brash succeed in winning his second Major competition in a row in Aachen? 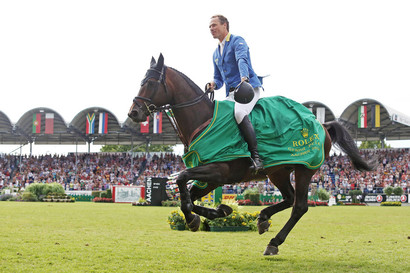 Scott Brash. Christian Ahlmann. Kent Farrington. Beezie Madden. Steve Guerdat. Edwina Alexander. Ludger Beerbaum. It is the crème de la crème, the absolute world-class of the show jumping sport, who will be competing at the Aachen Soers at the weekend. The World Equestrian Festival is the first Major show of the year and with it the Rolex Grand Slam of Show Jumping enters its third year.

Which rider will begin his personal Grand Slam? Or will the journey continue perhaps? It could do for Scott Brash! After his victory in the Rolex Grand Prix of the CHI Geneva 2014, the British rider could notch up a second Major triumph in succession. In addition to the regular prize-money, a 500,000-Euro bonus is awaiting him in Aachen– a further victory in September at the Spruce Meadows “Masters” would turn him into a legend: He could go down in history as the first rider to win the Rolex Grand Slam of Show Jumping. As the first rider in history to achieve this feat, he would pick up an incredible one million Euros on top of the prize-money.

In 2013, the first year of the Rolex Grand Slam, Nick Skelton from Great Britain was able to win the Major in Aachen with his exceptional stallion “Big Star”. In 2014, it was a German athlete, Christian Ahlmann, who after winning at the Soers had the chance to claim the prestigious Rolex Grand Slam title. In the saddle of “Codex One“, he was the only rider to jump clear in the jump-off and was eternalised on the legendary winners’ board in Aachen for the first time in his career. However, Ahlmann‘s dream of winning the Grand Slam came to an end in Spruce Meadows, after unfortunately finishing in 18th place. The hope of claiming the “two-out-of-three” bonus worth 250,000 Euros, which a victory at the Major in Geneva would have brought him, is also over.

The Rolex Grand Slam also ended very soon for the winner of the Spruce Meadows “Masters”, Ian Millar: The Canadian rider, who has participated at the Olympic Games a record number of times, didn’t compete at the CHI Geneva, which meant he was eliminated. Because although the riders are allowed to compete on different horses in the Major competitions, they are obliged to compete at all three events, in order to remain in the running to win the biggest coup in the show jumping sport.
So, all eyes will be on Scott Brash in the afternoon of May 31st, 2015 when he enters the main stadium in Aachen! “It will be very difficult,” admitted the Olympic gold medallist up front. “But I am really looking forward to the Rolex Grand Prix. My horse ‘Hello Sanctos‘ is in fantastic shape and we have prepared him for Aachen in a targeted manner.” Last year, the bay gelding let himself get very distracted by the Soers atmosphere and knocked two fences down.

Whether “Hello Sanctos” will show stronger nerves this time? But even then, it will remain exciting to the very last moment! After all, when the international top riders compete against each other with their top horses, every pair can win, every canter stride, every breath taken can determine the winner.

Ultimately, the time decides it all! Time for unique victories, time for top sport in a league of its own, time for the opening event of the year in the Rolex Grand Slam of Show Jumping – time for the World Equestrian Festival Aachen 2015!

“The Rolex Grand Slam is a series that is unparalleled. Each show is exceptional in itself. They are shows that look back on a great tradition with a Grand Prix that every show-jumper would like to win at least once in his life. The additional bonus on top is something very special. We are extremely grateful to Rolex and the organisers that they have made this possible. It moves our sport quite a few steps forward. It is extremely difficult to win all three competitions. I tried to pull it off again twice within one year, managed to reach the jump-off once, but unfortunately I picked up four faults. My chances of winning the Rolex Grand Prix Aachen in 2015? I will, of course, give it my best shot, but everyone is highly motivated and Scott Brash is in very good form at the moment and he will also try his hardest to win. One thing is definitely certain: It is going to be super sport.”