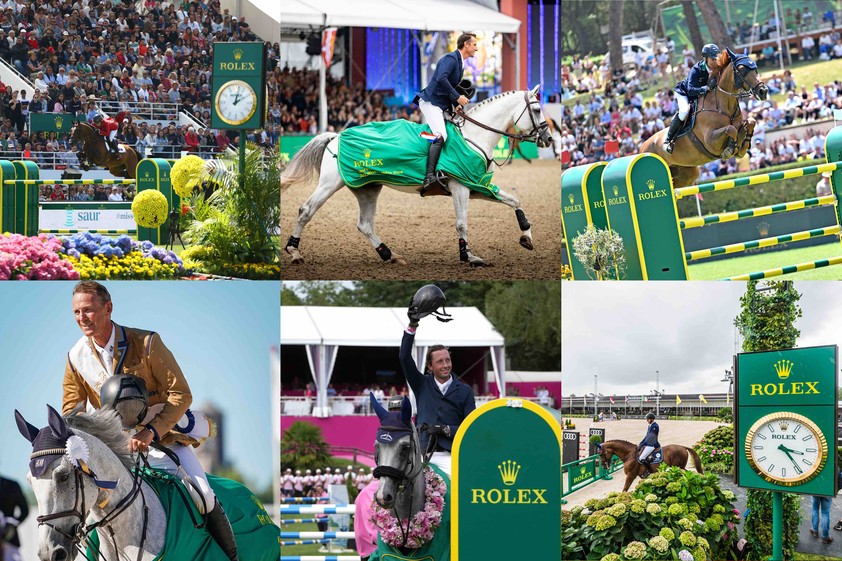 With European summertime drawing to a close, so too does the Rolex Grands Prix summer season, which begins in May and ends on the final weekend in August. Over the course of this four-month period, Rolex is the title partner of six prestigious shows’ Grands Prix, each one sitting outside of the revered Rolex Grand Slam of Show Jumping.

CSIO Jumping International de la Baule hosted the first Rolex Grand Prix of the summer season, also marking the first time Rolex has sponsored the show, a firm favourite with riders. Delighted crowds witnessed 59-year-old Canadian Beth Underhill and Dieu Merci Van T&L lift the inaugural trophy. The stallion was previously ridden by legendary Rolex Testimonee Eric Lamaze, who has now retired from the sport due to health issues. Lamaze is now providing his expert knowledge to the Canadian team in his new role as Chef d’Equipe and was with Underhill at the show. Second place went to Yuri Mansur of Brazil with his gelding Vitiki, with Frenchman Pierre Marie Friant claiming third with Urdy d’Astrée.

Just a week later, the world’s best horse and rider combinations made the short journey across the English Channel to the spectacular CHI Royal Windsor Horse Show in the grounds of Windsor Castle, which this year hosted a spectacular equestrian and musical performance to celebrate Her Majesty The Queen’s 70-year reign. Equestrian royalty gathered to contest the Rolex Grand Prix, which, in typical English style, was held under grey clouds and rainy skies. Bernardo Costa Cabral’s course caused issues throughout, with only three combinations eventually progressing to the jump-off. First to go was Belgian Gregory Wathelet with his trusted partner Nevados S who laid down a gauntlet that neither Max Kühner of Austria nor Daniel Bluman from Israel could match. Wathelet and his stallion now target the FEI World Championships, both hoping to carry forward their winning form.

Next up was CSIO Roma Piazza di Siena, which is often referred to as the most picturesque show jumping event in the world. On the pristine oval arena where 49 of the world’s best partnerships competed, 13 proceeded to the jump-off. Much to his delight, Irishman Denis Lynch claimed his second Rolex Grand Prix in Roma, his first coming in 2008 with the great Lantinus. Lynch had only recently taken over the reins of his ride Brooklyn Heights, but the duo were in harmony and produced the quickest round to take the title. Germany’s Jana Wargers and her bay stallion Limbridge followed up in second place and home favourite Piergiorgio Bucci took third.

Knokke Hippique, was won by World No. 3 Peder Fredricson from Sweden, riding his long-standing partner H&M All In, who is now 16-years-old. With six combinations going clear in the first round, it was a hotly contested jump-off. Fredricson, who now heads to the FEI World Championships in Herning, Denmark with H&M All In, commented: “H&M All In may be 16 years old but he is still a winner. He got a break for a few weeks and participated in a small competition last week to warm up again. Today was our day. I am immensely happy”.

The Rolex Grand Prix, held last weekend at Jumping International de Dinard, saw current World No.1 Martin Fuchs claim back-to-back wins in the prestigious competition, following his victory with Conner Jei last year. This year, the Swiss was partnered by his striking grey gelding Leone Jei, with whom he won the Rolex Grand Prix at CHI Geneva last year. The duo have been selected to represent the Swiss team at next week’s World Championships and will be full of confidence heading into the competition. Home crowd favourite Julien Epaillard and Gracieux du Pachis produced the only other double clear but were just 0.52 seconds slower than the winning combination, while Fuchs’ fellow Rolex Testimonee Bertram Allen and Pacino Amiro took third in the esteemed class with a fast four faults in the jump-off.

Attention now turns to the Brussels Stephex Masters, which for the first time this year will be held in a grass arena and will host the final Rolex Grand Prix of the summer season. Following this is the third Major of the year hosted at the Spruce Meadows ‘Masters’ where Gerrit Nieberg will look to continue his quest as Live Contender after his spectacular win in the Rolex Grand Prix at CHIO Aachen.