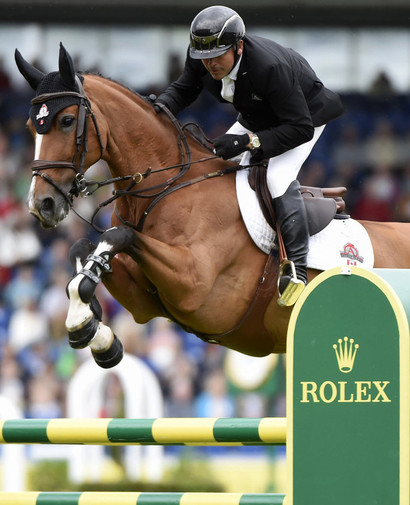 The first qualifier for the “Rolex Grand Prix” of the CHIO Aachen 2016 is over: The Canadian rider, Eric Lamaze, asserted himself with “Fine Lady” in the “Turkish Airlines-Prize of Europe” on Wednesday afternoon and relegated the current number one in the world ranking list, Simon Delestre from France, and the Belgian show-jumper, Olivier Philippaerts, into second and third place, respectively.

The athletes had to overcome 16 obstacles measuring up to 1.60 metres in height in the first big challenge of the Aachen Major. Steve Guerdat, winner of the CHI Geneva in 2015, wasn’t able to meet the requirements of the demanding course and had to retire with “Concetto Son”, so he wasn’t among the 14 clear rounds that reached the subsequent jump-off in the battle for the victory. However, this performance doesn’t reduce his chances of winning the “Rolex Grand Prix” on Sunday: As the Olympic gold medallist of 2012, Guerdat has already prequalified for the Final of the CHIO Aachen, for him winning the competition would mean his second Major victory in the Rolex Grand Slam of Show Jumping. That is why he rested “Corbinian” on Wednesday, Guerdat’s current first choice for the “Rolex Grand Prix”, because the gelding already presented himself in good form on Tuesday in the opening jumping competition and mastered the course with ease without picking up any faults.

The next qualifier for the “Rolex Grand Prix” is a floodlit competition on Thursday evening: The riders have a second opportunity to secure themselves a place on the starting list of the Grand Prix if they achieve a top ranking in the “Mercedes-Benz Nations’ Cup”. The third and final qualifier is the “Prize of North Rhine-Westphalia” on Friday. Following this, we will know who the 40 participants are that have qualified for the “Rolex Grand Prix” of the Aachen Major on Sunday, which is endowed with one million Euros in prize-money.