Influencer interview with This Esme 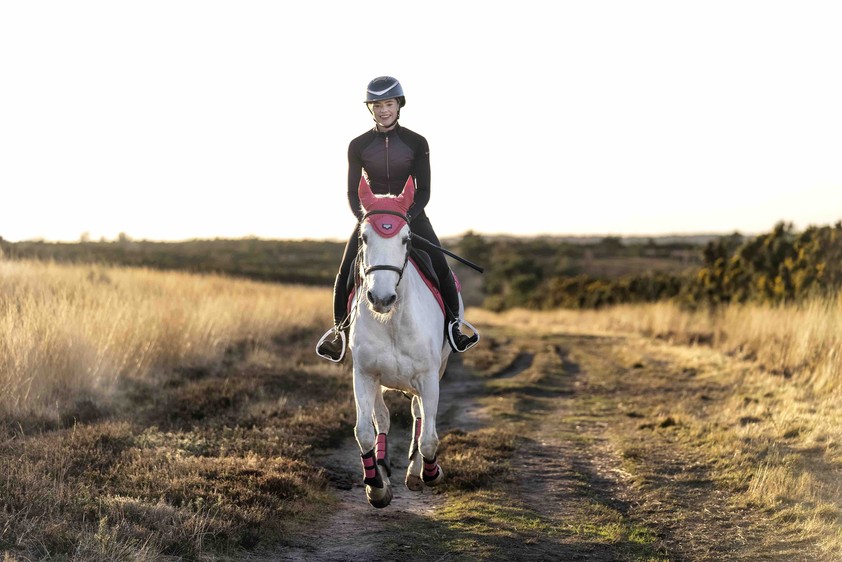 Esme Higgs is one of the biggest influencers in the equestrian world – with 730k followers and an incredible 100+ million views on her YouTube channel, as well as over 260k followers on Instagram and a stunning 412k followers on TikTok.

I am very lucky to have always lived in the countryside, so my earliest equestrian memory was probably growing up on a small holding with donkeys. The local riding school used to ride past my house, and from as young as I remember, I would always ask for riding lessons. My parents always used to say no for various reasons, such as I was too young or too short or too small to ride. My first time on a horse was at a friend’s fifth birthday party. After that they had no excuses, so I started having lessons.

My first pony was called Mickey. I still him have today – he features on the channel a lot. We loaned him for a month first and I wasn’t really expecting him to be my first pony – but we fell in love with him! I am very lucky that I got him at the age of eight – I have been very fortunate with horses that I have had.

How did your career as an Influencer start?

It really happened accidentally. My second horse, Casper, was very green when we got him, so YouTube was something I did for myself to watch his progress. My friends and family would video me riding him and his show jumping rounds, and then I would edit them and post them on YouTube. For me, being able to see our progress gave me a lot of confidence in our partnership. I uploaded them onto YouTube originally because I didn’t have the greatest phone and so it would run out of storage, so YouTube was a safe space that I could store them.

One summer, I decided to do a ‘how to tack up your horse’ video, because I come from a non-equestrian background and I know that sometimes riding schools just teach you how to ride and don’t focus so much on the care side, so I thought this video would be helpful to some people. This was the first video of mine that wasn’t just watched by my friends and family – I think it ended up getting around 1,000 views and I thought that was wild! In posting that video I found my passion, and I started making Vlogs, not because I thought lots of people would watch them, but because I liked making a video diary for myself.

I made quite a lot of videos that I didn’t post because I was too shy or too scared of what people would say. It was really the summer after my GCSEs that YouTube became something I did with all my time and loved doing, and still love doing today. I was that awkward age of 16, where you can’t drive, and I lived in the middle of nowhere – so I made lots of videos of my ponies for fun. I got up to 10,000 subscribers just making videos of my phone, but I never thought it would take off like it has and become my full-time job. At the time, I knew there were a few YouTubers who did it as their main job, but they were very mainstream – producing lifestyle and beauty content – I never thought it would be possible for a sport as niche as horse riding.

What are the steps in building and growing a successful equestrian social media network?

I think that one of the most important things is consistency. I spent three years uploading onto YouTube once a week without earning a penny or thinking it was my job. I did it because I loved it and was always so excited to get home on the weekends and make a video. A lot of people try to do YouTube but after a few months they realise it is hard work and give up. I think the main elements to being successful are consistency, good quality content, being yourself and being original.

Which riders do you follow and who would you say has the most impact with their social channel?

I really enjoy watching Caroline Breen’s stories. They show the behind-the-scenes of her life - a lot of top riders only share content from shows but she shares her dogs, vegetable patch and other things that you do not typically get to see from riders.

Which of the four Majors that make up the Rolex Grand Slam is your favourite?

CHIO Aachen – I am going there for the first time this year and I am so excited! It looks incredible and I am sure that I am going to have the best time!

How important is social media and Influencer strategy when marketing a Major equestrian event?

I think that it is crucial to the future of equestrian sport to be on social media. In the last couple of years, the equestrian world has been brought into the 21st century and has started to see the value of social media. Social media provides more exposure to the sport than ever before, and this is important in ensuring the next generation of equestrians come through. It also enables the sport to be more accessible than ever before, and this is something that I am passionate about and have been working on with my channel. I have been working with some great riding schools and charities that aim to make the sport more accessible. A lot of people have found my channel because they love animals, and they are now interested in equestrian sport or have even started riding themselves!

What is a typical day in the life of This Esme?

It really depends on the day – it is probably easier to say a typical week than a day. But on a typical day when I am at home it usually consists of filming and editing videos, along with riding and looking after my horses. I try to have a point in the evening when I stop working, but I work from home, and I am very driven, so it is hard for me to ‘switch off’. I probably do about 80-hours of work on the channel each week including filming, editing, interviews and zoom calls. There is always more to do but I absolutely love it!

How does the Rolex Grand Slam of Show Jumping enhance the sport?

I think show jumping is the best discipline for people who do not know too much about horses as it is easy to understand. The Rolex Grand Slam of Show Jumping enables a wider audience to be able to watch the world’s best horse and rider combinations compete at the very top level of the sport. There is also a lot of strategy involved in the sport and it is nice that it is not always the same person who wins each competition. I find show jumping such an exhilarating sport to watch – I have been lucky to go to some of the top shows in the world and it is incredible how close you can get to the fences and the horses and riders.

I think I have to say all the incredible people I have met and the amazing stories I have heard. I work with some amazing charities such as Brookes and World Horse Welfare which is a truly incredible experience. Also being able to be with my horses and work with horses is a dream come true for me.

What is your ultimate ambition for your brand and channel and platform?

My absolute dream would be to have a series on a platform such as Netflix or Amazon Prime. It would be mind-blowing if that were to happen.

Who is your favourite rider?

This is really hard – I have so many. One definitely is Trevor Breen; he teaches me and has helped me with my horse Joey – I think he is amazing. I also really admire Holly Smith and I have fortunate to be able to interview her quite a few times at Hickstead.

Who is your favourite Show Jumping horse?

I would have to say Ben Maher’s Explosion W. He is incredible and I have been lucky enough to see him jump at a few different shows.