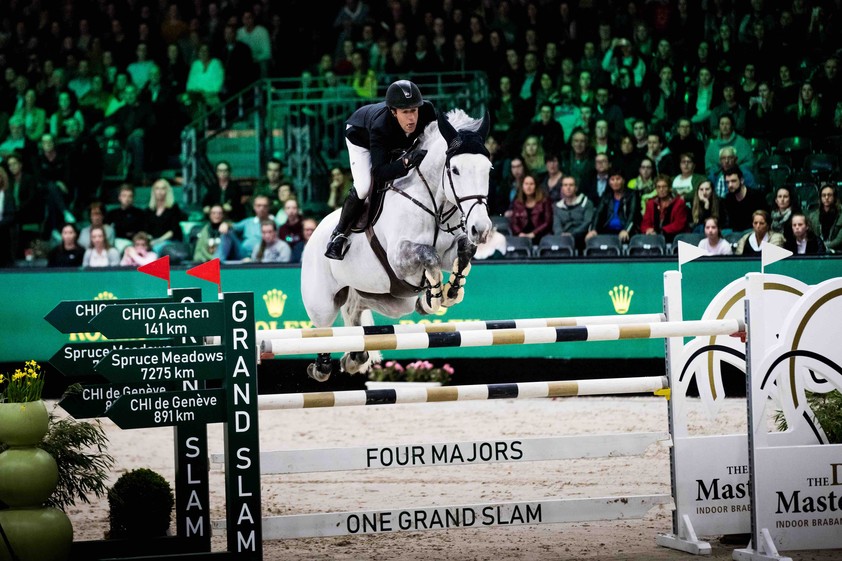 Who to Look Out For At The 2020 Dutch Masters

This year’s Dutch Masters, held from 12 – 15 March 2020, will see over 65,000 spectators descend on the town of ‘s-Hertogenbosch to watch some of the world’s best riders go head to head. Audiences can expect an all-encompassing programme of equestrian competitions, where some of the world’s most distinguished show jumping and dressage riders will be competing. The Rolex Grand Prix, the pinnacle of this year’s event, will culminate on the Sunday afternoon, where a variety of equestrian’s elite riders will do battle to become the Rolex Grand Slam of Show Jumping live contender.

The Brabanthallen ‘s-Hertogenbosch 14,500 capacity will welcome a number of the world’s best horse and rider partnerships. The 2020 Dutch Master’s will feature multiple contenders who will be vying for victory in the first Major of the calendar year.

Rolex Testimonee, Steve Guerdat (SUI), is no stranger to achieving excellence at the Majors. Three-time winner of CHI Geneva, the current World No.1 will be hoping to emulate this success at The Dutch Masters this year. He brings with him a formidable number of horses, putting him in good stead for the upcoming competition, in his bid to become the new live contender.

The Rolex Grand Slam of Show Jumping live contender, Martin Fuchs (SUI), is also in contention. Having already achieved so much at a young age, his career highlights include an individual silver medal at the 2018 FEI World Equestrian Games and most recently, an individual gold medal at the 2019 FEI European Championships. Fuchs has also shown a run of recent good form, securing a first-place victory with Stalando 2 in the Equinimity WEF Challenge Cup CSI 5* and he will be hoping to add this year’s Dutch Master’s trophy to his impressive list of accomplishments. The Swiss Rolex Testimonee will be partnered with a strong string of horses, including his top mount Clooney 51, who led him to victory at CHI Geneva last December.

Henrik Von Eckermann (SWE), a previous live contender, is one to follow at this year’s Dutch Masters. Following a stellar 2019, including victories in the Rolex Grand Prix at The Dutch Masters and at CHI Royal Windsor Horse Show, Eckermann will be hoping to defend his title and re-take the reigns as the live contender. The strong partnership with the talented Toveks Mary Lou, has allowed the Swedish rider to rise up the world rankings and the mare’s ability to produce quick jump-off times in small arenas, means there is no doubt he will be feeling confident heading to The Netherlands next week.

Legendary equestrian, and former World No.1, Scott Brash (GBR) is a name synonymous with success in the Majors. In 2015, the Scotsman made history by becoming the first rider to win the three consecutive Majors of the Rolex Grand Slam of Show Jumping. Brash has already attained some enviable recent results, including a stunning victory in the Turkish Airlines Olympia Grand Prix and second place in the Rolex Grand Prix at CHI Geneva last December. As the British rider creeps up the world rankings, all eyes will be on him at this first Major of the year.

Daniel Deusser (GER); World No.3, is also a rider to watch at this year’s Dutch Masters. The German has consistently posted top finishes across numerous 5* competitions and has been in touching distance of a Major victory on more than one occasion. Fellow German teammate, Marcus Ehning, brings a wealth of experience to this year’s Dutch Masters. After riding Prêt a Tout to victory in the Rolex Grands Prix at CHI Geneva and CHIO Aachen in 2018, the former live contender will be hoping to put himself in contention for this year’s competition in ‘s-Hertogenbosch.

From across the pond, USA’s Kent Farrington is known for his speedy displays in jump-offs, highlighted in the 2019 Rolex IJRC Top 10 Final where Farrington produced a lightning fast round to lift the coveted trophy. Aboard his new bay mare, Austria 2, the fast duo knocked an incredible 2.22 seconds off the time set by Ireland's Darragh Kenny in a breathtaking display of skill and speed. Fans can expect more exceptional horsemanship from Farrington, that of which also lead him to be victorious at the 2019 Rolex Grand Prix at CHIO Aachen.

The home crowd can look forward to seeing a strong contingency of contenders including former World No.1 Harrie Smolders and European gold medalist Jeroen Dubbeldam who will both be pushing for big results. It will be also be an emotional occasion for Dutch rider, Maikel van der Vleuten who will be retiring his legendary horse Verdi TN at the Show following an incredible 15-year partnership.