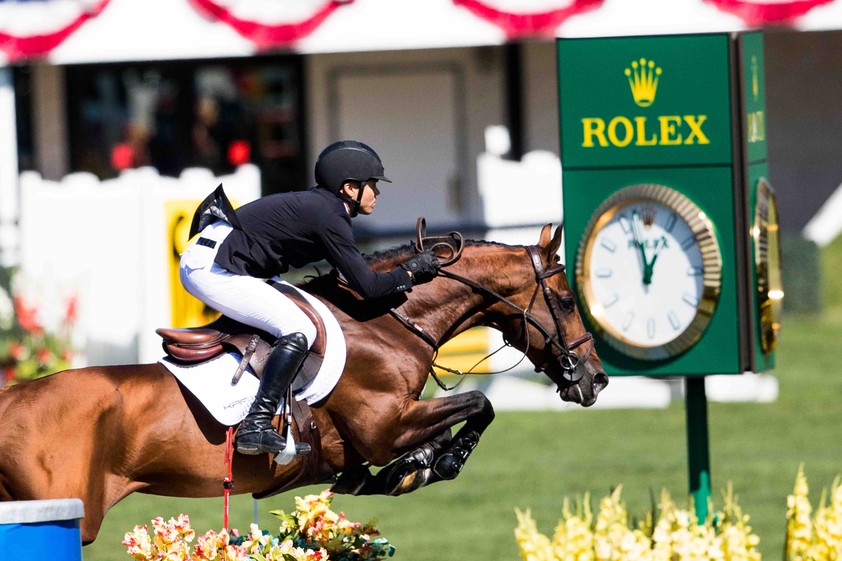 The CSIO 5* Spruce Meadows ‘Masters’ returns from 8-12 September 2021, and will play host to the second Rolex Grand Slam of Show Jumping Major of the year: the CP ‘International’, presented by Rolex, which will be staged in the impressive International Arena on the final day of the competition.

After winning the Rolex Grand Prix at The Dutch Masters in ‘s-Hertogenbosch in April – and in doing so becoming the live contender – Austrian Max Kühner has confirmed his attendance, alongside a stellar list of competitors, including five out of the current top 20-ranked riders in the world, and five Rolex Testimonees. As ever, the five-day competition promises to be a truly international affair, with 15 nations represented, with the hosts welcoming no fewer than 42 of its very own home-grown athletes.

Current world number three, Martin Fuchs travels to Calgary brimming with confidence, following Switzerland’s win in the team jumping competition at the European Championships, which he and his gelding, Leone Jei played a crucial role in. The 29-year-old will be accompanied at Spruce Meadows by his talented 10-year-old gelding, Conner Jei, winner of the Rolex Grand Prix at the Jumping International de Dinard.

British rider Scott Brash returns to Spruce Meadows, where he was crowned the first ever Rolex Grand Slam of Show Jumping champion in 2015 with his legendary gelding, Hello Sanctos. The current world number four brings Hello Vincent to Calgary, who he finished a very credible fourth with in the Rolex Grand Prix at Knokke Hippique in June.

Fuchs’ compatriot and the current world number 10-ranked rider, Steve Guerdat, has also added the Team European champion accolade to his impressive list of titles. The three-time World Cup champion (2015, 2016, 2019) will compete at Spruce Meadows with his dependable 12-year-old gelding, Venard De Cerisy, who he took to this year’s Tokyo 2020 Olympic Games, where the duo finished fifth in the Team competition.

Rio 2016 Olympic Team silver medallist, Kent Farrington leads the charge of athletes from the United States, and in a clear demonstration of intent, brings seven horses with him to Spruce Meadows. Of note, the current world number 13 will compete with his 15-year-old mare, Gazelle, 14-year-old gelding, Creedance, and nine-year-old hot prospect, Orafina.

Rolex Testimonee and home favourite, Eric Lamaze, is one of 42 athletes who will be flying the flag for Canada. Currently ranked number 120 in the world, Lamaze will be joined by his 18-year-old mare, Fine Lady 5, who helped him clinch an Individual bronze medal at the Rio 2016 Games, 12-year-old stallion, Dieu Merci van T & L, and 13-year-old Kino.

Other accomplished Canadian riders who are set to compete, include Tiffany Foster, Kara Chad, Mario Deslauriers and Erynn Ballard.

Rolex Grand Slam of Show Jumping live contender and current world number 20, Max Kühner, is the competition’s sole representative from Austria. Kühner brings Eic Coriolis des Isles to Spruce Meadows, a nine-year-old French stallion, who he will partner in the CP ‘International’, presented by Rolex, the next stage of his Rolex Grand Slam journey.

2019’s CP ‘International’, presented by Rolex champion, Beezie Madden is part of the US contingent, and travels with her 15-year-old La Silla-bred stallion, Breitling LS. Madden’s compatriot, four-time Olympic Team medallist, McLain Ward, travels to Calgary off the back of a Tokyo 2020 silver medal, and will be hoping for more success at Spruce Meadows with Kasper van het Hellehof and HH Azur.

No stranger to Spruce Meadows, having competed at the ‘Masters’ in 2019, a young rider to note is 23-year-old Belgian, Zoé Conter, who is confirmed to ride with her 12-year-old stallion, Davidoff De Lassus and 12-year-old mare, Dolitaire Chavannaise in the week’s 5* classes.

What have you been up to since winning the Rolex Grand Prix at The Dutch Masters in April?

Generally I’ve been fine, considering we’ve had a lot of shows, which have followed the various lockdowns. After Den Bosch, Elektric Blue had his next show in Madrid, where he won the Global Champions League team competition. After that, he went to Knokke Hippique, where he came third in the Rolex Grand Prix. In Monaco, I rode one of my young horses called Eic Coriolis des Isles, and he came second in the Grand Prix. Finally, Elektric Blue was fourth in the Grand Prix in Valkenswaard, which was a chance to prepare him for the European Championships, and now his next stop will be CHIO Aachen. We love and enjoy what we do, so as long as everything works out well, it’s less about work and more about passion.

I will bring Eic Coriolis des Isles with me to Spruce Meadows, who’s a nine-year-old French stallion, who I mentioned finished second in the Grand Prix in Monaco in July. I’ve had him since he was a seven-year-old, so I’ve known him for quite a while. He’s never competed in a Grand Prix like the one in Spruce Meadows, so it will be interesting to see how he likes the amazing show arena. I think I’ll give him two classes before the Grand Prix, just to get him accustomed to the whole situation, so I hope he will be well prepared.

Eic Coriolis des Isles performs well in an outdoor situation. He has an outstanding character and is amazingly brave. He has a lot of possibilities in his body, so jumping is very easy for him – it feels like he has endless scope and good riding abilities. For sure, he doesn’t have vast experience, and he generally needs one or two days to get to know a new place. He has a very big stride and he’s not spooky or shy with anything, so I’m assuming he will like Spruce Meadows.

This year the shows have been scheduled very close together, which is why I decided to take Elektric Blue P to CHIO Aachen, as it comes directly after CSIO Spruce Meadows. We are extremely happy to have a horse which is able to win just one Grand Prix in the Rolex Grand Slam series. If we want to win several of them, then we would usually just choose one horse, but I think it’s too much to jump the same horse week after week, particularly travelling these long distances.

Which other horses will you take to Spruce Meadows, and which of your young horses are you really excited about?

As a second horse, I will bring Vancouver Dreams to Spruce Meadows, who I’ve known for over five years since she was a five-year-old. She’s a very careful horse with a big stride, who likes the big arenas, and she’s also very fast, so I hope we can win something with her. Eic Coriolis des Isles is still young, so he is one of the big hopes. We also have Eic Cooley Jump The Q, an Irish horse who I have big hopes for. He’s just eight years old and we’re slowly introducing him to the bigger classes, and we might bring him to CHIO Aachen. There are some more young horses, who have big hopes, such as Eic Ambiance Du Seigneur, who’s just seven, but is an outstanding jumper. Then there’s an eight-year-old mare called Neugschwents Concordia, who is a very careful horse and probably needs a bit longer. Overall, we have some very nice developing young horses for the future. 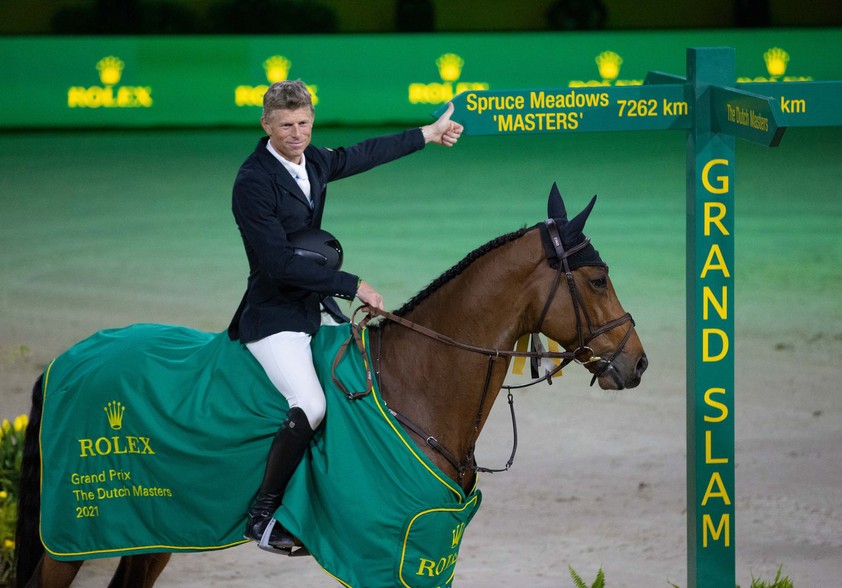 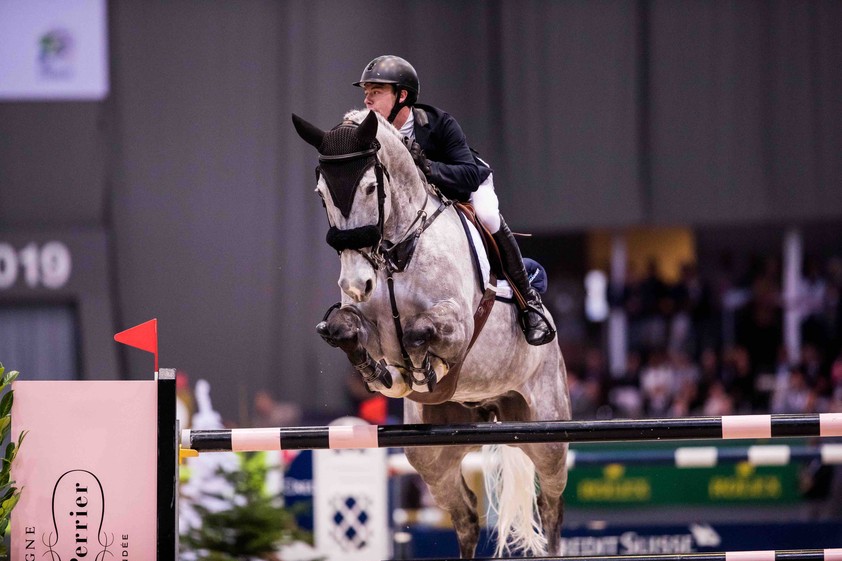 The horses have been going quite well this year, and I’m now up to number 55 in the world rankings, which is great. Thinking towards the back end of this year, I’d like to do a few World Cup qualifiers, then I will start trying to get ready for next year, to try and do even better in 2022. I’d love to compete in CHI Geneva again – I competed there in 2019, and it’s one of the best shows I’ve ever been to.

Which horses are you most excited to be competing with this year?

Hhs Burnchurch has been very good this year, I also have a nine-year-old called Hhs Fast Forward, who’s been jumping really well, as well as another nine-year-old called Hhs Javas Gucci, who’s jumping fantastically, too. So, we do have a few good young horses coming up through the ranks that we hope will do great things in the future. Two of my horses are brothers – Hhs Burnchurch and Hhs Fast Forward – and they have pretty similar personalities, and have a lot of the same traits and mannerisms. When you’re riding them, you just know that they will both have a little look at certain things in the yard or the arenas, which is quite funny. They’re both very talented, and Burnchurch went clear in the Rolex Grand Prix in Geneva in 2019 and at one or two other 5* Grands Prix. I’ve also just jumped in Dublin with a very good six-year-old horse called Hhs Corneta, she jumped amazingly there, and I think she has a good chance of becoming a future Grand Prix horse.

I think it’s been amazing for the sport of show jumping. To put all those shows together, raising that much prize money, is just incredible. To win the Rolex Grand Slam is a very hard thing to accomplish, so to see Scott [Brash] manage to do it is astonishing. I’m interested to see if anyone else will also manage to complete it at some point in the future. They are all massive shows, and are a big part of the show jumping calendar. To be a part of them is already a great accomplishment in my eyes, but to go on to win one of them would be unbelievable. The Rolex Grand Slam brings something completely different to the sport, one week you’re jumping in Calgary, then you’re jumping in Aachen, which are two of the biggest grass arenas in the world; it really is the pinnacle of the sport. I prefer to jump outdoor, and although Geneva is one of the most incredible shows I’ve ever been to, I find those big grass arenas easier to ride.

What have you learnt over the course of the last 18 months, and what positives will you take?

I’ve learnt that it’s definitely not a bad thing to give a horse some time off, and over the last 18 months, they’ve developed a lot from not being at shows every week. It’s become clear to me that we shouldn’t rush the horses, as they need time and will only get better with age. I’ve spent more time at home with my family and the young horses, which has been nice. Having dinner at home a few times a week and riding the young horses a bit more myself has been a real positive out of the last 18 months. These are the things that we forget about when we’re so busy at shows every week. While it was a really nice time that we had together at home, it has been really great to get back to shows and get going again.