2021’s edition of the CSIO Spruce Meadows ‘Masters’ culminated with the week’s pinnacle class, the CP ‘International’, presented by Rolex. The second Major of the year, as part of the revered Rolex Grand Slam of Show Jumping, welcomed 28 horse and rider combinations, who would go head-to-head in their individual quests to become the Rolex Grand Slam Live Contender. Austrian Max Kühner had his sights set on retaining his Live Contender status after winning the Rolex Grand Prix at The Dutch Masters in April.

The ultimate show jumping test for horse and rider, the Leopoldo Palacios-designed course would be contested over 14 demanding obstacles within the confines of Spruce Meadows’ imposing International Ring. With the competition watched on by 2,000 excited and knowledgeable spectators – the maximum allowed under COVID-19 restrictions – and with just 12 pairings progressing to Round 2, the stakes were high, with the riders all too aware that there was very little margin for error.

Australian Rowan Willis, a familiar face at Spruce Meadows, set the early Round 1 pace with his 15-year-old mare, Blue Movie, jumping fault-free in 80.99s. Home favourite Mario Deslauriers confidently progressed to Round 2 with his 12-year-old mare, Bardolina 2, crossing the line in 83.00s without a penalty. Swiss Steve Guerdat and Australian Hilary Scott were the only other riders to navigate the Round 1 course without picking up any penalties. The eight riders also advancing to Round 2, included Egypt’s Nayel Nassar, Canadian Erynn Ballard, Kent Farrington, McLain Ward, Will Simpson and Natalie Dean from America, Mexico’s Carlos Hank Guerreiro, and Briton Scott Brash.

In a change of fortunes, American duo, Kent Farrington and McLain Ward, faultlessly steered their equestrian partners around the second round course, after each put a fence down in the first. Hot on the American pair’s heels was reigning Rolex Grand Slam champion, Scott Brash, who added just four penalty points to his first round score. However, it was former world number one, Steve Guerdat who was to assume top spot after he effortlessly guided his prodigious 12-year-old gelding, Venard de Cerisy, around the 14-fence course. Following Guerdat’s performance, the final two riders to go were Deslauriers and Willis; however, neither were able to match their first round scores, meaning the three-time World Cup winner (2015, 2016, 2019) and 2012 Olympic Individual jumping champion won the CP ‘International’, presented by Rolex, and in doing so was crowned the Rolex Grand Slam of Show Live Contender.

The only rider to compete at each of the Majors since the inception of the Rolex Grand Slam of Show Jumping, Guerdat, commented: “I’ve been dreaming of winning these classes since I’ve been a little kid. Since I can remember, Calgary and Aachen have always been the shows that I want to win. I’ve been lucky enough to win Geneva a couple of times, but Aachen and Calgary have been missing. I’m not going to quit until I win them – I have one of them now, and I’m going to aim for the other one very soon. This is what drives us riders, I guess.

“Venard is a very strong, brave and powerful horse. He has a lot of blood and energy in his jump. He doesn’t have the best of techniques, but because of his power and will to do good all the time, we’ve had the chance to understand each other over the years. He’s a very sensitive horse – he’s very difficult to get on and off, you can’t move him, and he’s a little bit shy with everything. But once he sees a jump, he just wants to jump it.” 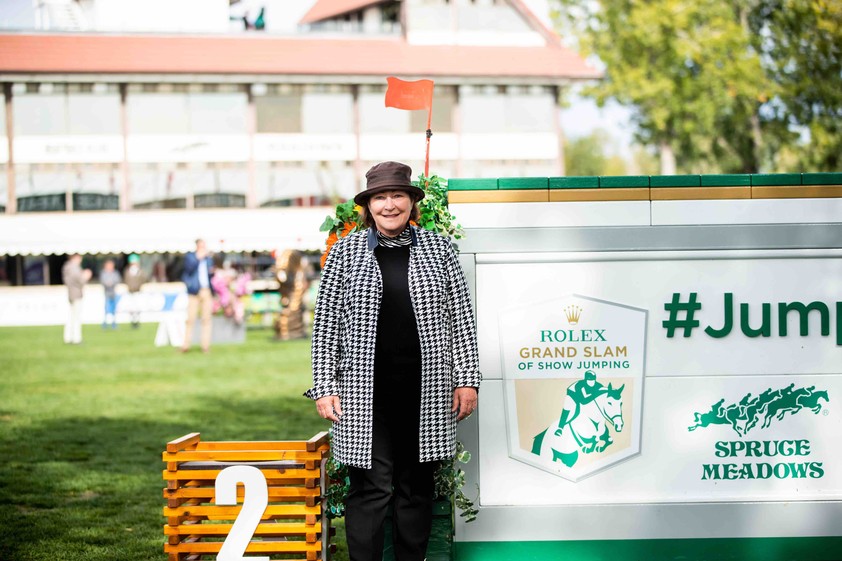 We’re ecstatic to have horses jumping. It hasn’t been easy, but we’re thrilled to see the riders and the horses. Starting yesterday, we’ve been allowed to have two thousand fans per day, and we chose to take the position that they all had to be fully vaccinated. Everybody has been going through an awful lot of protocol, because that’s what we have to do for the Canadian government. It’s been difficult for the last 16-18 months, but it’s genuinely exciting to see everybody, and it’s enjoyable to watch the competitions and to see how good the riders and horses are.

How would you sum up the last 18 months?

I think the best words to use to describe the last 18 months are resiliency and flexibility. With COVID-19, everything is run through the government, so you have to have lots of patience, and you have to be incredibly resilient. It’s definitely not a straight line from the start to the finish – it has a lot of curves. You have to be able to manage what the government is doing and what COVID-19 presents to you. I’m sure every government has been difficult, but Canada has been extremely difficult. Our borders have been closed and they only opened five days ago.

We started in February with an application to the province, which was a 100-page document, which included a COVID-19 mitigation plan. That has to be signed-off by Alberta Health, which is our province, and then by our Chief Medical Officer, whose name is Dr. Deena Hinshaw. We got that on 6 June, so from February to June we were talking to the authorities, but they wouldn’t approve anything. On 18 June we received the minister’s sign-off, and then we had to take that document and to the federal government, because with the federal government we had to apply for a National Interest Exemption with four of their departments. It had to go to heritage, which is where sport sits; it had to go to health again; it had to go to immigration, essentially the border; and it had to go to jobs and economy. We had to gain approval from all of those ministries alongside another document in order for a lot of people to be let in to Spruce Meadows. So, if you want one word, I think patience would be the right word!

How much hard work have you and your team had to put in to make this year’s edition of CSIO Spruce Meadows ‘Masters’ happen?

COVID-19 has been very difficult, because the minute we weren’t able to run any shows in 2020, we immediately knew that it would really affect us. We lost 90 per cent of our revenue and so we had to let 100 people go, some of them who has been working for us for over 20 years. We only kept 30 people on, which consisted of 10 in the office, 10 in the horse programme, and then 10 in maintenance and operations. The people in the office have worked very, very hard. Conor Charlton, our Competitions Manager, was the lead for the application to the government. He’s worked extremely hard, and he’s always come at it with a great attitude. Our whole team has just really pulled together and has managed to do more with less, but at the same time it’s been hard. I have an enormous amount of respect for them. 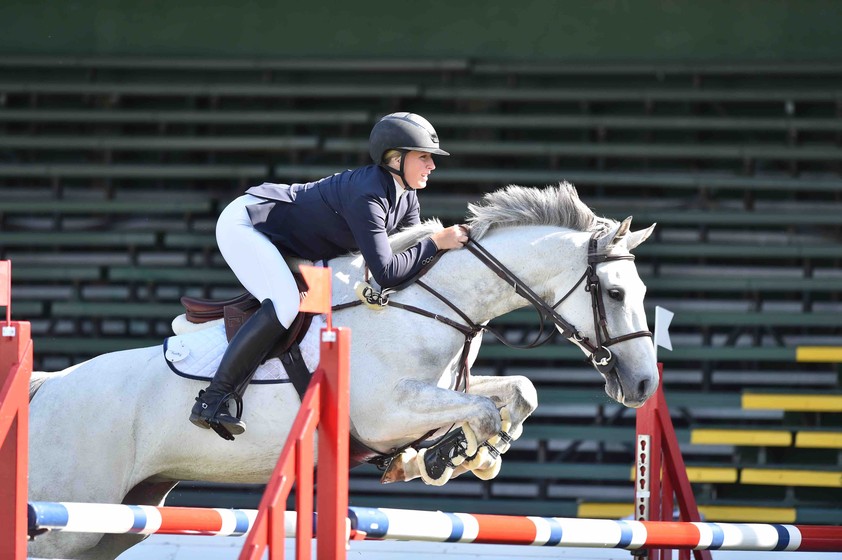 I just graduated high school and I’m taking a few years off to pursue riding, as in the future I want to make a career out of this. I’m not sure how that plan looks in the short-term, but finding someone I could work and ride a little bit for, and bring on one or two horses – that’s the plan at this point.

I just recently did my first 1m45 with one of my horses. A pretty huge goal, depending on how things go and what horses I have, would be to do my first 1m50, or be a little more competitive at that bigger height, which I haven’t done as much. On a more personal side, being a little more confident, to be able to talk to some more people around the shows, and to make some more connections.

That’s hard, but one great moment was when I was awarded the 2019 Xerox Junior Rider of the Year award here. Obviously, the award felt pretty great, but the horse that I rode into the International Ring with for the presentation is my horse, Theo. He’s a bit of a weird guy and sensitive, and the moment that he went in there, he was so good and solid, so it was a pretty good feeling. Above that was my first time in the International Ring last Friday with Theo again – it just feels like it’s opened another step to the whole journey.

Tell us a little bit about your stable of horses…

Right now I have two geldings. Theo is my long-term guy, who I’ve had for three years now, and we’ve moved up together. When I got him, he’d only competed up to 1.20 level in show jumping. He was an eventer and I’d only competed up to 1m30. We did our first 1m30 together, our first 1m40, our U25 classes, we had a few U25 wins, so I have a really good relationship with him. He’s definitely where I got my confidence from. My second horse is actually a lease from Spruce Meadows, and his name is Charlie [S 15]. He’s a little bit more normal than Theo, so we got him so I could practice a little bit to be more consistent at the 1m40 height. He is a great guy, who steps out every day and loves his job, and he’s really level-headed and loves to jump clean. They both love their job.

I could probably name any top rider. Beezie Madden is someone I’ve looked up to for a really long time, and also Tiffany Foster. My mum has helped me and supported me through my entire journey so far, almost completely by herself, and she’s tried to give me every opportunity possible. I look up to her in a lot of ways, and she works really hard to be able to give me these sorts of opportunities.

What’s the best piece of advice you’ve ever been given?

My mum, my coach and all of my support team have always told me to just keep focused on my own path and not to get too worked up on what everyone else is doing, as everyone has such different paths in this sport.

What makes Spruce Meadows so special?

I love Spruce Meadows – it’s my favourite show, and I consider myself really lucky that I’ve been able to grow up competing here. Nowhere else has the type of atmosphere that Spruce Meadows has – you step into its grounds and it feels as though you’re transported into its own type of world. The crowds are incredible and the fact that it attracts top Olympic riders from all over the world makes it pretty special.