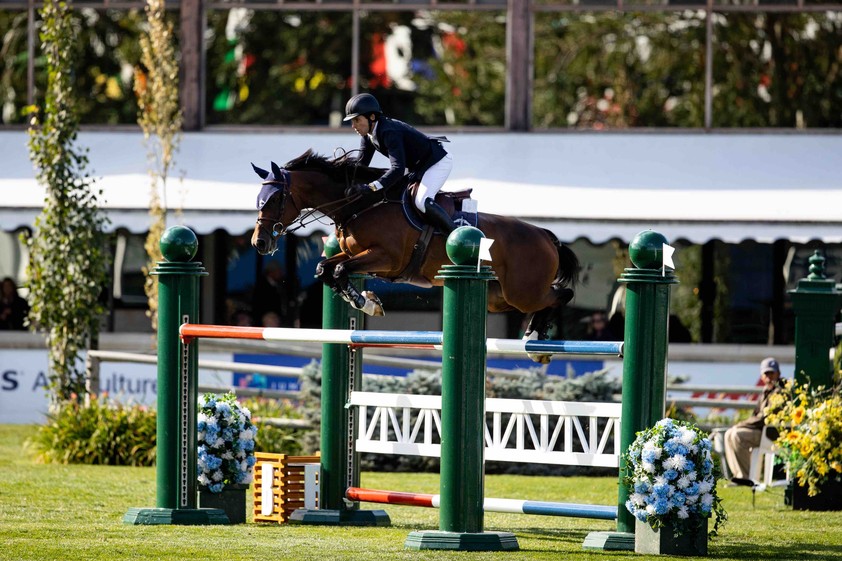 First into the arena, Olivier Philippaerts and his 11-year-old stallion Le Blue Diamond V't Ruytershof finished with four faults, as did second to go Daniel Deusser and his 11-year-old stallion, Bingo Ste Hermelle. On form Conor Swail – currently sitting fourth in the world rankings – and his 15-year-old gelding, Count Me In, made no mistake, confidently navigating the shortened course fault-free in a time of 43.46 seconds. Last to go, Frenchman Marc Dilasser looked strong in the early stages; however, he and his 10-year-old gelding Chamann Has eventually put the penultimate fence down, finishing in third place overall.

Delighted with his win and lauding the support of his team, Swail commented: “I get on every day and ride for an hour or two, but they’re the ones putting in all the hard work, making sure he [Count Me In] is healthy, ensuring he’s travelling from A to B correctly. We’re obviously very good at what we do but it’s the team behind you that makes it all work and makes the success happen.”

And on qualifying for Sunday’s Rolex Major, Swail said: “I’m very excited because my horse is on good form. He’s already jumped here during the summer and he’s been second in the Grand Prix [CP ‘International’, presented by Rolex] here. He always gives me good chances, so if I have a bit of luck on Sunday we’ll hopefully be knocking on the door in or around the top spot.” 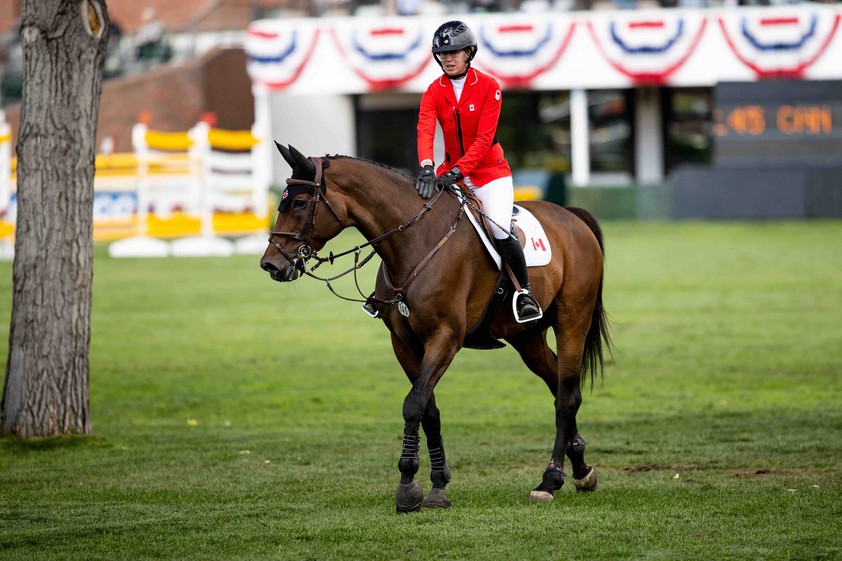 Which horses will you be competing with this week?

I have two horses here, Christiano and Truman. They’re both bay geldings and I’ve been riding them for a while. They’re fantastic horses – they’re solid, brave, kind and scopey, so I’m optimistic about our chances this week!

Why is Spruce Meadows such an incredible place to come and compete at?

It’s such a beautiful ring here. When you walk under that clock tower and there’s the formal nature of saluting the sponsor, coupled with the courses always being really challenging, it means it’s never boring here. What’s truly special about the ‘Masters’ is the crowd and the quality of the animals here. It’s so good for Canada to have this quality of horses and riders coming to our country. Since covid, it’s been really hard in Canada, so to now have attracted all of these great Europeans and the best in the world is really exciting.

What are your plans for this week, particularly looking ahead to Sunday’s CP ‘International’, presented by Rolex?

Qualifying is of course important. My best horse is Truman, who has to jump the Nations Cup on Saturday, and then jump again on Sunday. He’s a solid horse and he’s definitely fit enough to do everything. It will all just come down to recovery, especially if we jump two hard rounds on Saturday. It’s going to be about him feeling his best and having lots of energy for Sunday, and then we see what happens.

The World Championships was a great experience. Being surrounded by that quality of horse and rider and professionalism was incredible. The courses were difficult but fantastic, and there was zero margin for error. Being in that environment, it just makes you want to up your game. Yes, there’s always room to be better, but being around that quality inspires me to be better.

As far as the all-female team is concerned, I had a fantastic time. With those girls – Tiffany, Beth and Erryn – we had a great time together and we all get along really well. We’re all really strong women, we’re really different but at the end of the day we’re fighters. I really enjoyed spending time with them and fighting that battle.

Do you have any young horses, who you have high hopes for?

I’m riding two really nice eight year olds right now. One of them is called Jagger Hx and I have very high hopes for him. He’s scopey, he’s careful, and with a little bit more training, I hope that he makes it all the way. The other one is a little Irish mare called Athena. She’s fast and careful and a real player. If those two come up the way I want them to be, then I will have another one-two punch coming right behind Christiano and Truman. That’s the goal in terms of longevity and sustainability.

What has the Rolex Grand Slam done for the sport of show jumping?

The Rolex Grand Slam has been so special for show jumping. I had a little conversation with the Rolex team when I was in Europe and they were explaining to me about their brand and how they try to only associate with excellence because that is their brand. Then I look at the horse shows and riders they sponsor. I look at the quality of their watches and it really resonates with me that Rolex is all about excellence. So every time you go to one of these Rolex Majors, you know everything is going to be amazing the highest level of competition. As I say, it’s truly inspiring.

What do you love to do away from show jumping?

Well, I have two children – I have a four year old and a 12 year old. I also have a wonderful husband, who doesn’t ride horses. When I’m not riding I spend as much time as possible with them. Just being around my family is what I want to do when I’m not riding. 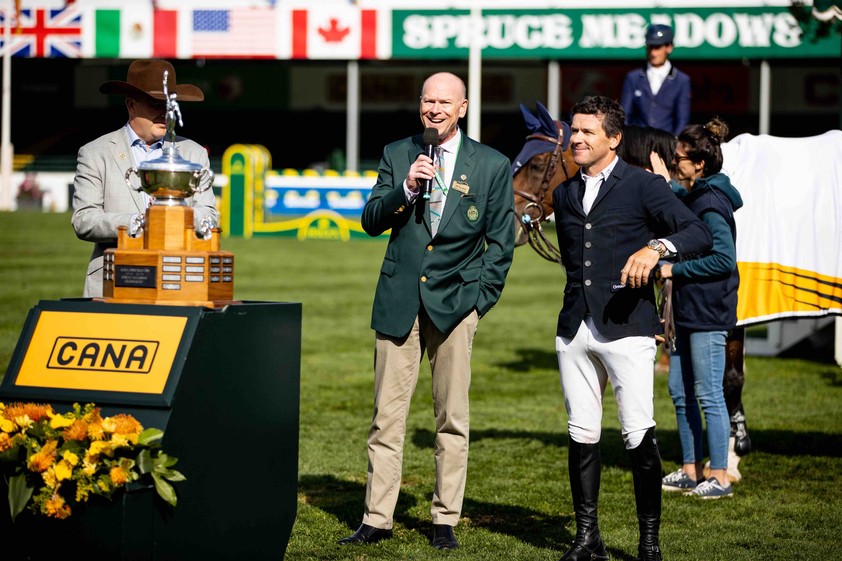 Word from the Organizers:

You must be thrilled to have fans back at CSIO Spruce Meadows ‘Masters’, who will add to the atmosphere in the International Ring and also for TV audiences at home around the world?

The last two years have been very unusual and, in some respects, difficult. Of course, not being able to organise tournaments in Canada in 2020 and then running under a national interest exemption last year, which was very restrictive, that at least allowed us to try and find our game legs. Coming back now has been like dragging a boat out of a dry dock; we had some personnel challenges, the sport has changed and there are new players coming in, so it’s tremendously exciting for the venue itself, all of our constituents, including the riders, the media, the fans and also the corporate supporters. Our corporate supporters have been wonderful, we have a fantastic media support and this is the best entry list we’ve ever had for the Spruce Meadows ‘Masters’, which is fantastic!

Can you tell us about the new partnership with Sportsnet?

We’ve worked with Sportsnet on a number of occasions. What happened during the pandemic is that we started thinking of bringing things in-house because we couldn’t have a lot of people inside the property, so streaming has become much more prevalent and acceptable. We started discussions and they were welcomed enthusiastically, and we were able to expand to run 13 consecutive weeks on Sportsnet, in prime time, on both a live and delayed basis.

One of the interesting things about this sport is that while it has a core audience, it also has an  audience of passionate fans who are also horse people, who are usually busy with horses on their weekends. We felt that if we could bring something with a live offering of every event, where you’d never miss a round out of the International Ring, plus something that would allow people to watch highlights, then it might be the time to do it. We decided to make a business plan and talked to Sportsnet, and honestly discussions were short because they knew the property and our way of working, and they knew we have a coast-to-coast audience in Canada because of the great amount of interest we’ve been cultivating throughout the years.

The collaboration started this year and it’s been terrific since the beginning. This Sunday we’ll have three hours telecast on Sportsnet from coast-to-coast and also because of their schedule flexibility and the number of platforms they have, people will be able to watch it throughout the week, because people might be more interested in watching the start of the NFL season or the US Open Final this weekend. It’s a really busy schedule.

It's your 47th year working at Spruce Meadows – what is your standout memory?

On this particular day, it’s hard not to look back on Her Majesty The Queen’s visit to Spruce Meadows. In June of 1990, the day dawned without a single cloud, and the fans started to arrive on an unusually sunny day in June. I remember clearly a woman sitting in the south grandstand with her Welsh flag at 06.00, and she had driven a couple of hundred kilometres to be here. It was a very magical day and we were given a great responsibility to run this project with Mrs Southern because she was traveling with Her Majesty, and we knew that she wanted to make her proud when opening the gates of the property.

Then there were more patriotic days for us with iconic wins for Ian Millar with Big Ben and Eric Lamaze with Hickstead. And of course Scott Brash winning the Rolex Grand Slam, that will be never taken away from the venue.

Next year marks 10 years since the launch of the Rolex Grand Slam of Show Jumping; how successful has it been and how has it positively changed the sport?

It has been wildly successful. It has expanded into the non-equestrian world with people realising what an amazing concept and challenge it is. I think that it has been able to bring four of the great show jumping venues in the world – each and every one of them distinct – under the umbrella of a distinctive brand all with one common goal. It wasn’t just created as a marketing strategy and all four shows were able to keep their individuality, be that the magnificence of Geneva or The Dutch Masters or Aachen.

The Rolex Grand Slam of Show Jumping’s credibility is what distinguishes it from other concepts that have been launched. There wasn’t anything added to the calendar, and it was built off this foundation of established organisations that have a certain reputation for excellence. The athletes knew the venues and they knew what it would take to win there. If you look at the roster of champions from the individual events, it’s been amazing. What’s also amazing is the people who have come out of nowhere, such as Sameh El Dahan and Gerrit Nieberg – it’s changed their lives. So for these reasons, I think it’s been an unqualified success.